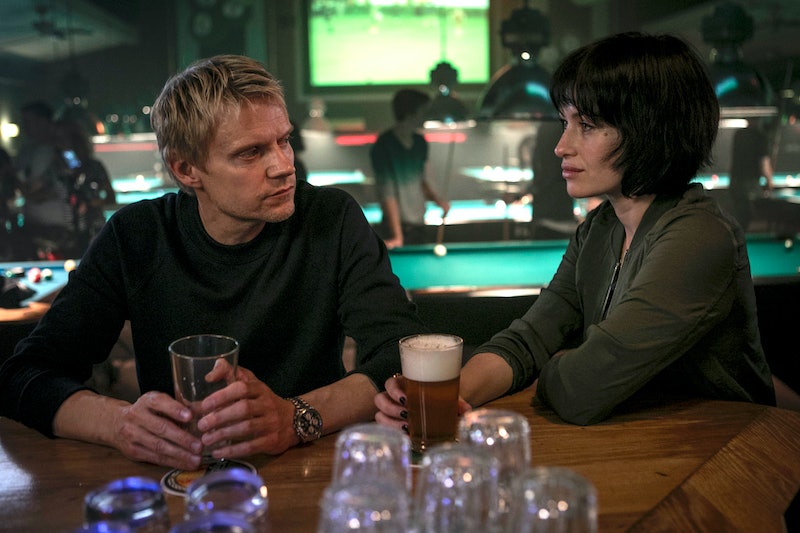 Series one of ITV’s revamped Van der Valk comes to an end on May 10. Set against the picturesque backdrop of Amsterdam, the detective series follows a team of police officers as they attempt to solve unusual and often gruesome murders. Van der Valk first aired in 1972 but its remake, starring Marc Warren (Safe, Hustle, The Good Wife) as the titular detective and Maimie McCoy (White House Farm, A Confession) as his second in command Lucienne Hassell, has brought it right up to date. It’s been the perfect lockdown content and with series two on the horizon, I sat down with Warren and McCoy to talk about their most memorable days on set and what the future has in store for their characters.

Alice Broster: What was it that initially attracted you both to Van Der Valk?

Marc Warren: I’d not been offered a part like this in a long time but I knew the producer really well and I knew the series. Aside from the usual fears of "Can I pull this off?" I thought why not? Life always seems to give you what you need, not always what you want. Things like this make you get out there.

I’d worked with Maimie already on Musketeers and our characters had been real enemies. We always joke because all the scenes we had together I was always strangling her.

Maimie McCoy: I totally agree about life giving you what you need. About six months before the audition came in I’d been thinking about Amsterdam a lot. I’d not been since I was 23 and was desperate to go back. In the January I set myself the goal that by the time I was 40 I wanted to get a significant job. When I knew Marc was playing Van der Valk something just fit.

AB: So you enjoyed working in the Dutch capital then?

MM: There was a different vibe on set. It was such a blazing hot summer and everyone that cycled past on a bike seemed to be totally good looking. It was the first time I came home and was slightly over London.

MW: It was so hot, we had heat waves. It was unbearably hot when we were shooting in the boat. If you didn’t have a fan on it was too much. We were due to start shooting the second series this week until the pandemic hit. So, we will get to see Amsterdam in November and December too, all being well.

AB: Obviously you can’t give too much away but what would a second series look like?

MW: Well, until you’re on set and the clapper board comes out, anything can happen. All being well, we will shoot a second series and I’m really looking forward to it. I have a vague idea of what the episodes will be about and am in regular contact with the writer. Chris [Murray] is very open to everyone contributing, there doesn’t seem to be any ego to him. He’s very open to inclusion.

MM: I’m really looking forward to revealing elements of every member on the team's personal lives. There are so many intricate plot lines going on and I think it’d be great to see more of Lucienne and how her character develops more through the series.

AB: In the first two episodes of season one, the team's investigations have taken them into the world of politics, art, and mysticism, what can viewers expect from the final episode this Sunday?

MW: The last episode is about fashion blogging, sustainability, and diversity. My character and Emma Fielding's character, our boss (Julia Dahlman), also have to go back to our past and it explains a lot about why Van der Valk is so moody. It has a real action ending too. If you haven’t seen the first two episodes, you could definitely pick it up.

AB: Thinking back on season one, is there a particular scene that sticks out in your mind as being the most fun or thrilling to shoot?

MM: In the first episode I was stabbed in the alley and we were shooting it at 2 a.m. Everyone was tired, wanted to go home, and I had to lie there, bleeding out. They came in for the close up so I was trying to keep it super tense and then I felt something on my arm. I froze and that’s when they called action. After the shot I asked, “was that a rat that ran over me?” Our producer came over and said “Maimie, don’t worry it was a tiny cat.” I laughed and then our make-up woman said it was a massive rat.

MW: For me it was so memorable filming in the Rijksmuseum as we had it to ourselves. Doing scenes with a Rembrandt behind me was quite extraordinary. On the first day I did a scene with Maimie and I had a really strong sense of not knowing what I was doing and I just had to push through. You have this feeling that you’re out of your depth but no one knows that.

AB: Lastly, how have you been holding up in lockdown?

MW: I’ve been on my own for two months, I rented a converted barn 30 minutes from my parents. I wanted to be near to them. It’s been lovely and doesn’t feel too different to how I normally live my life. The only thing is I don’t feel the normal guilt of feeling like I should be doing more with my life. Days seem to go really quickly.

MM: My days are so long but I think that’s just having a small child who’s up early and has bags of energy. I’ve spent so many years out of work that there’s something relatively familiar about this. I think actors are quite good at filing time with books and films.