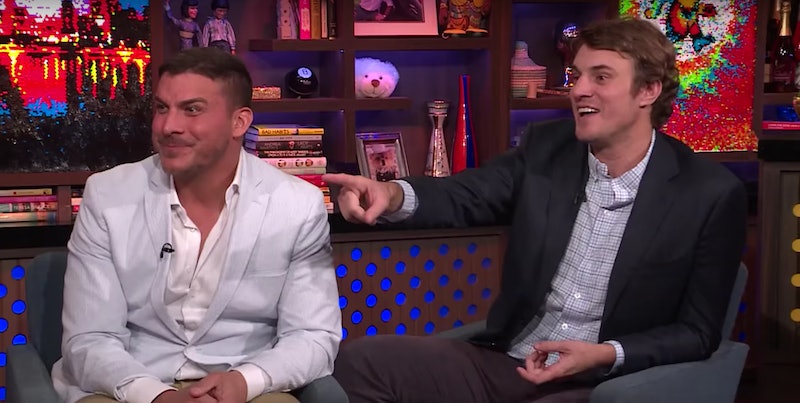 The wedding of the SUR-ntury sure is shaping up to be a Bravolebrity bonanza. Judging by some recent tweets, it looks like Vanderpump Rules stars Brittany Cartwright and Jax Taylor’s wedding guest list includes Southern Charm’s Shep Rose, plus Summer House’s Carl Radke and Kyle Cooke. The Pump Rules cast and Shep and Carl and Kyle all in the same place? Whew, I can smell the Tito’s vodka already. And thankfully, this major crossover moment will almost definitely be on Pump Rules Season 8 (because hi, Jax and Brittany's wedding is going to be a huge part of Season 8), and I haven't been this excited since I found out Lala Kent and James Kennedy were back in the recording studio.

The Bravoverse brought Jax, Shep, Carl, and Kyle together years ago, and they've been friends ever since. And not just the "It's fun to chat for a few minutes at network events once in a blue moon" type of Bravo friends. Apparently, they're the "get invited to each other's weddings" type of Bravo friends. Last July, Jax tweeted that Shep (and non-Bravolebrity Dale Earnhardt Jr.) (what a world!) would be receiving invites, and it sure looks like Jax kept his word. Just yesterday afternoon, Jax tweeted at Shep to let him know he’s looking forward to hanging out when the wedding extravaganza begins. “Miss ya bud!!!!” Jax wrote. “See ya in a few weeks for the wedding, got some really fun sh*t planned for the boys!!!”

Shep said he couldn't wait, and then asked where he should fly into and what he should pack to wear each night. Jax told Shep he can wear whatever because it’s “a friggin castle,” but then let the Charmer know there may be a knight costume or a dragon costume in his future. And then, Jax tweeted at Summer House’s Kyle and Carl to update them on what they will be wearing: “.@imkylecooke and @carlradke you guys can be mermaids. Sorry, we drew straws and this is what was left.” And then, Kyle volleyed back, "A knight in shining armor needs a mermaid or two so makes sense. Happy to fall on the sword."

Assuming all of this is not a bit, it really sounds like Shep, Kyle, and Carl will be at the wedding. And while the stuff about knights and mermaids and dragons may be a joke, this is a Pump Rules wedding we are talking about. There will probably be a costume element at some point during the wedding week. The Pumpers love a costume party, and if there is one place to throw a costume party, is a castle in the middle of Kentucky.

If Bravo were to set up some Big Brother-style 24/7 live feeds for Jax and Brittany’s wedding week, wild mini horses couldn’t drag me away. The only thing that would be better is if I could temporarily turn into a fly — an actual fly, not a Brundlefly — and hang out on the walls of the Kentucky Castle on Jaxany’s big day.