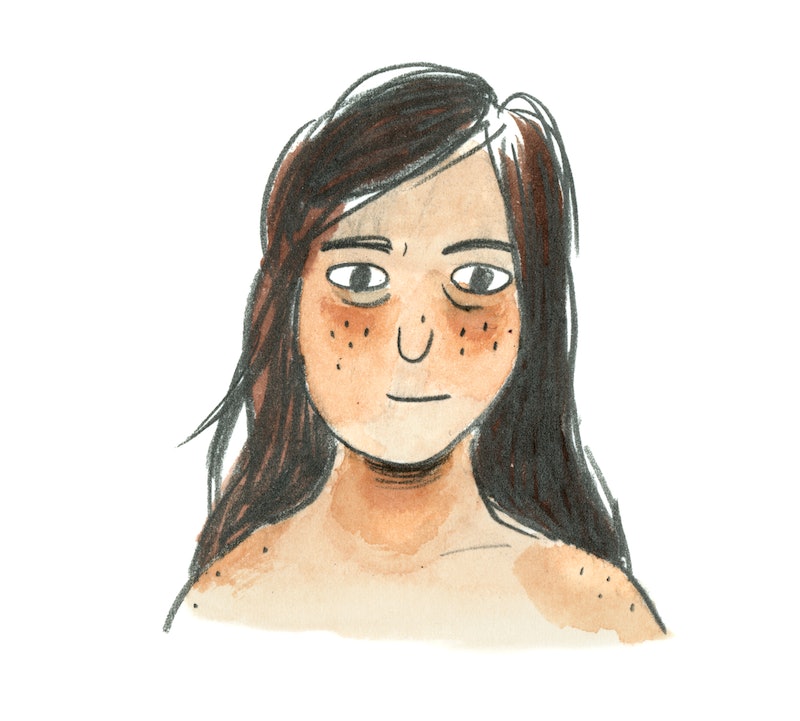 Originally published in 2005, Vanessa Davis' Spaniel Rage is getting a re-release from graphic novel publisher Drawn + Quarterly. Begun as a project to draw something every day, Spaniel Rage is a lasting testament to being single in the city as a college graduate. Almost 15 years after Davis drew them, these slice-of-life comics have returned for Millennials' enjoyment. The new edition of Spaniel Rage hit store shelves in February, and I've got insight on the creative life from Davis herself below.

Vanessa Davis began by self-publishing Spaniel Rage using her workplace Xerox machine. "I brought [Spaniel Rage] to different alternative comics shows around the country and met a lot of other cartoonists and made friends — it was great," Davis tells Bustle. "I thought I'd be self-publishing Spaniel Rage for many years, but small and independent presses were coming up at that time and one offered to publish it." That was Buenaventura Press, which closed in 2010, citing financial difficulties.

Davis calls Spaniel Rage "an experiment," and it was. In 2003, the young artist challenged herself to draw one thing each day. What emerged were intimate, almost journal-like portraits of her life, some of which you can see later on in this piece. Anyone who has ever spent a Saturday lying on the couch watching old movies, or has wondered how the other, anonymous people on the train manage to keep it all together, will be able to relate to the cartoon Davis' foibles.

Davis got the idea to draw something every day from her teacher, Ken Tisa. Developing that habit, she says, "helped to shape [her] hands-off, natural, messy sort of approach to art." But for Davis, drawing something every day did more than produce a book, or even create a sort of artistic philosophy. It actually helped her grow as an artist, and develop a strategy for success after she falls into a rut.

(Seriously, if you're an aspiring artist, writer, or other creative who wants to jumpstart your career, you should absolutely try the do-a-thing-a-day strategy. Because it's fun, it works, and it gives you a lot of material to work with.)

Drawing one thing a day keyed me into my observational skills, and helped me edit and make decisions. It sort of helped me work out my style — in comics your shapes become your vocabulary, so you have to figure out how to draw things in a symbolic or iconic way. That took me a long time — I'm still working on it. I definitely don't draw one thing a day. It's pretty grueling. But when I fall out of practice or lose my hold on what I'm doing, I find that doing it always leads me back.

The most surprising thing about Spaniel Rage is its broad and lasting appeal. Reading it more than a decade later, as a rural chick who has only visited NYC once — and spent the whole time thoroughly 1) stressed out and 2) impressed with the tri-state area's public transportation system — Davis' autobiographical comics felt all-too-familiar.

"I can only imagine that [Spaniel Rage] is relatable," Davis says, "because rather than focusing on a plot, which requires a specific scenario, I focused on thoughts and feelings and observations, which everyone has, no matter who or where they are."

Obviously, you have to wonder if Spaniel Rage would be different if Davis were writing today. In 2003, the Motorola Razr was the sleekest phone on the market, the iPod didn't yet have a color screen, and "twilight" was still a period in the day. George W. Bush was about to be re-elected to the presidency, tattooing was still illegal in several states, and three countries — Montenegro, Kosovo, and South Sudan — had not yet declared their independence. Put simply: the world has moved on.

More impressive than what has changed in the decade since Spaniel Rage was published, however, is what hasn't. Davis' drawings and experiences still feel relevant, even contemporary. The corded phone on Vanessa's nightstand isn't unexpected, given the Millennial hipster's obsession with all things of the Eighties and Nineties. We still use remotes to change the TV channel, carry oversized tote bags, and marathon-watch decades-old movies.

Moreover, Davis tells me that the driving, personal force behind Spaniel Rage has changed with age. She says:

I think that one of my impulses behind drawing that book was to present my life and ask, like, is this normal? Not only to talk about myself, but to draw out feedback from others. I was so young, new to adulthood, in a weird transition period. I still draw comics to connect with and learn about other people, but I also feel more secure in my assertions of what I'm witnessing, and doing things my own way.

For those of use who are of a certain age and already at that state of personal security, reading Spaniel Rage is like revisiting your younger self. But if you still feel like an imposter at work or school, or if you're recently independent and blowing your ramen-noodle budget, Spaniel Rage is the book that will make you go, "Dude, same."

Davis' style is frequently rough, with the artist/author sometimes commenting on how her skill differs from one drawing to the next. She cites Tisa's influence on her work, and I ask which books she would recommend for people who love hers.

"I hesitate to compare myself," Davis says, "but my ultimate recommendation is always Lynda Barry. Her One! Hundred! Demons! is the most perfect book. The Greatest of Marlys. Anything by her."

Hesitation or not, Davis' style does bear some resemblance to Barry's. Neither artist shies away from depicting the imperfections and uglinesses of life. They don't seem to be concerned with making traditionally beautiful art, so much as they want to make something real.

Aside from stylistics, Davis also resembles Barry in the way she harnesses nostalgia. But where Barry puts the flashback feel to use in her Marlys Mullen comics, which center on a group of pre-teen cousins growing up in Middle America during the 1960s, the yearning for a simpler time is something Spaniel Rage has developed over the last 11 years. Davis' book was contemporaneous when it debuted in 2005, but now, just a short decade later, Spaniel Rage reads like a wholesome artifact to those of us who remember a time when next to nobody checked their email on their phone.

Davis left our correspondence with a few words about resistance, the same kind of sentiment another Drawn + Quarterly author, Sarah Glidden, offered when I spoke to her just after the general election. I feel compelled to share Davis' thoughts on this, simply because it's important to realize that we're all in this together:

All I can really think about these days is that we have to stop the Trump administration. They want to dismantle our democracy and society as a whole. Please let's all try not to become complacent, self-serving creeps who stand by and let this happen.

Art is more important now than ever. Art is resistance. So make good art, and support other people in doing the same.

Spaniel Rage is out now from Drawn + Quarterly.