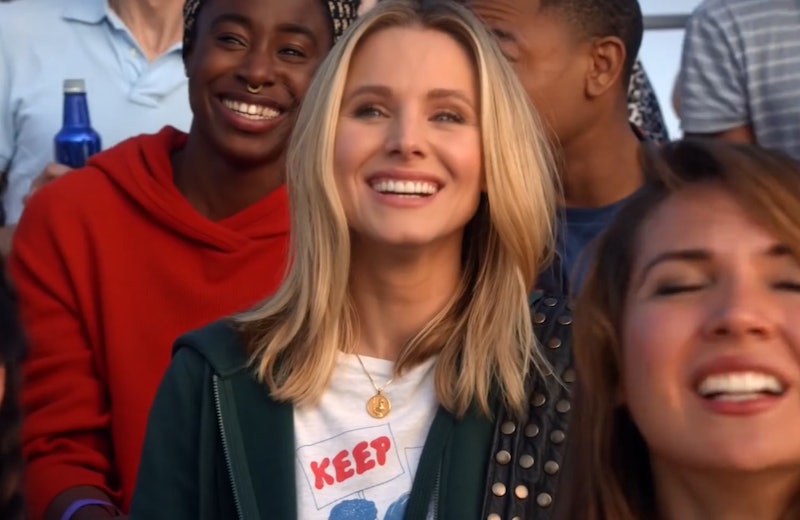 Veronica Mars Season 4 turned out to be a true dog and pony show. Aside from Hulu dropping the episodes an entire week early, fans had a double celebration when they learned that Veronica Mars finally got her pony — or at least a dog named Pony anyway. As any true Marshmallow would know, one of Veronica's famous running jokes is her wish that someone will surprise her with a pony.

As it turned out, Logan (Jason Dohring) is the one who eventually got Pony for Veronica (Kristen Bell). “Daddy’s home?” Bell's Veronica asks Pony in the first episode of Season 4. Fast-forward to the titular protagonist walking her furry friend on the beach where fans find out that "Daddy" is a super-ripped Logan, who is seen gloriously emerging from the water, surfboard in hand.

According to Vulture, Rob Thomas and Jennifer Graham's second Veronica Mars mystery novel, Mr. Kiss and Tell's featured the detective and Logan adopting a puppy and naming it "Pony." The premiere of the Hulu revival is the first time Marshmallows get to actually see the little guy, however.

Back in February, the official Veronica Mars Instagram account announced the pup's addition to the cast. As they captioned a photo of Rocco:

❗️Casting Announcement⁣ ❗️⁣Rocco will be playing the role of Pony, Veronica and Logan’s adopted pup! When asked how he felt about his big role he only had one thing to say…..“Bark.”

For her part, Bell also gushed about Rocco during the July 19 Veronica Mars San Diego Comic-Con panel. The actor began by teasing a new cast member who wasn't present because his schedule is "a little hard to nail down" and he's "a little bit aloof."

After confirming it was Logan — not her dad, Keith (Enrico Colantoni) — who "finally" got Veronica her Pony, Bell reminisced about her time working with Rocco. "He's the most wonderful dog I've ever met," she enthused. "He very quickly became my best friend, and, then, as a wrap gift, he got me a pillow of his face so that I could snuggle him forever."

Even the Veronica Mars production assistants got in on the fun, gifting Bell with socks that had images of her and Rocco printed on them. She explained that while the crew set up every scene, she and Rocco would always cuddle in a corner while they waited. "Now I have socks with all those pictures on it," she joked.

Not that Bell needs any sort of keepsake to remember her time in the role. “I really want to play this character for a while,” she recently revealed to Entertainment Weekly. The reason, Bell elaborated:

“It felt so necessary when I got back into her skin. And I have a theory: When the world felt safer, we were okay rooting for Walter White [of Breaking Bad]. I don’t think people want an antihero anymore, I certainly don’t. And Veronica is safe. She’s fighting for good. She’s in situations that we’ve all been in, where we felt like an outsider. I mean, that is the response I get from fans: ‘This show helped me get through high school.’ ‘This show convinced me not to do X, Y, Z terrible things to myself.’ I’ve had a lot of fun on a lot of jobs, but that’s a huge factor of why I keep coming back to this.”

Veronica finally getting her "Pony" probably didn't hurt either.

More like this
'Friends' Star Maggie Wheeler Offers Support To Matthew Perry After Reading His Memoir
By Alyssa Lapid
Anne Hathaway Shared A "Thrilling" 'Princess Diaries 3' Update
By Darshita Goyal
This 'Gossip Girl' Wardrobe Error Has Gone Viral On TikTok
By Alyssa Lapid
Ashton Kutcher Wants Danny Masterson “To Be Found Innocent” In Rape Retrial
By Jake Viswanath
Get Even More From Bustle — Sign Up For The Newsletter
From hair trends to relationship advice, our daily newsletter has everything you need to sound like a person who’s on TikTok, even if you aren’t.