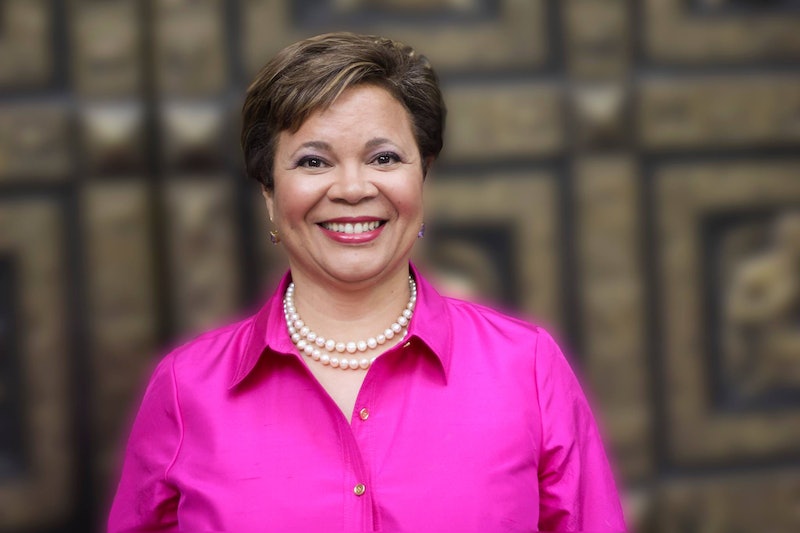 Among a dazzling field of victories in Democrats' historic sweep in the 2017 elections, the mayor's race in Charlotte, North Carolina stands out as one of the brightest spots. Not two hours after the polls closed on Nov. 7, the Republican candidate conceded defeat and Charlotte, for the first time in its history, celebrated the election of its first black woman mayor, Vi Lyles. And she'll be sworn in on Monday.

Over the phone, Lyles affirms her groundbreaking victory. "It is historic," Lyles says. "I accept and acknowledge that."

Unlike many of the Democratic victors who ran for the first time this year, the mayor's race wasn't Lyles' first foray into politics. Formerly a two-term city council member in Charlotte, Lyles is a seasoned public official who felt compelled to run for mayor because of two major events that dragged Charlotte into the national spotlight in recent years: the state legislature overturning a non-discrimination ordinance that protected the city's LGBTQ community, and the fatal police shooting of a black man that was caught on camera.

When a Charlotte police officer fatally shot Keith Lamont Scott in an apartment complex parking lot in September 2016 and footage of the incident was released to the public, the outrage among Charlotte's African American community was palpable. Protests broke out, and some turned violent. The Charlotte police department maintained that Scott was armed when he was confronted by officers, while his family said he was holding a book, not carrying a gun. Ultimately, the local district attorney decided that the officer was justified in fatally shooting Scott.

With Scott in mind, Lyles says she sees her first order of business as becoming something of a bridge over the divide between the community she's a part of and the institutions that serve it. "The first thing I want to do is actually talk about how to rebuild trust," Lyles says. "And my goal is to take each step every day and say, does this build trust with our citizens?"

Building Bridges (& Trust) In The Community

Now, after an exhaustive and at times ugly campaign, Lyles faces the difficult business of governing. As a black woman with years of experience serving a booming urban city in the South, Lyles says she is in a unique position to become a mayor for all of Charlotte.

"It's not just being a black woman elected," she says. Rather, it is that she's a black woman who knows the city's history and understands the unique challenges Charlotte's minority residents face:

I can say things like, highways came through middle class black neighborhoods and cut us off from the streets. I can say things like we don't have the connections between the west side (which is our black side), the east side (which is our brown side), and all of the development going around — so what are we going to do about it? I can actually challenge and ask that question because of who I am. And I know this city. And I think that's what's historic about it. It's not just being a black woman elected. But what I want to say is a black woman that's well entrenched in our history.

Charlotte's changing demographics means that Lyles will serve a population that's rapidly diversifying. According to the public data platform Data USA, 43.1 percent of Charlotte's population is white, while black residents and Hispanic residents account for 34.1 percent and 13.8 percent of the population, respectively. And as Charlotte's economy expands, studies show that its minority population is growing faster than its white population. Mecklenburg County, where Charlotte is located, became a majority-minority area in 2012 — and the city is expected to follow.

How Charlotte votes reflects its position as an urban city in a conservative state, too. During the 2016 presidential election, Trump won North Carolina by 49.8 percent to Hillary Clinton's 46.2 percent. But while it's known as a swing state, Clinton handily defeated Trump in North Carolina's major cities. She nabbed 62.3 percent of the vote in Mecklenburg County, compared to Trump's 32.9 percent.

Lyles' remarkable election speaks to Charlotte's burgeoning status as dominant blue city in a purple state. "I think that the historical portion of [my election] is that this community supported a black woman that didn't have all the answers, but had the commitment of trust and integrity," Lyles says. "All the analysis says it has to be this or that. But all politics is local."

The Democratic Party Gets Some Fresh Blood

Lyles' election was one of a bunch historic "firsts" Democrats racked up in the 2017 elections. At least eight cities elected a black mayor for the first time; several transgender candidates were elected to public office; and refugees, ethnic minorities, and women — many of whom ran for the first time — beat Republican incumbents.

For those heartbroken by the 2016 presidential election, Nov. 7 was a triumphant comeback. But it was also a curious departure from where the Democratic Party previously appeared to be heading on a national level. The party has no unifying leader, and the infighting that's been ongoing since the last presidential primary is public and painful. The 2017 election wins sent a clear message to Republicans about where voters stood, but it also appeared to be a warning to Democratic leaders about the future of their party.

Julie McClain Downey of EMILY's List, a Democratic organization that helps pro-choice women run for office, says the 2017 wins showed that Democrats on the ground are working for their communities — something she believes will continue into 2018.

"The media narrative around the fact that Democrats are divided is really not true on the ground," Downey tells Bustle. "Voters are truly galvanized against what the Republican Party has stood for."

Against a backdrop of an America where Trump continues to crack down on immigration, pick fights with prominent black figures sports and media figures, and embolden white supremacists who march the streets in his name, the election of the most diverse slate of Democratic candidates in recent memory seemed like it took place in an alternate reality. Was it a response to voters having spent nearly a year in Trump's America? Perhaps. There's no ignoring the controversies that plague politics in Washington, D.C., but Lyles says that Democrats' successes this year are a testament to the hard work the party's candidates put in, too.

"I think it's a foundation for the Democratic Party to look at and determine what really worked," she says. The 2017 election offered Democrats a window of opportunity to be responsive, she adds, "and they should take full advantage of that now."

In many ways, the issues that Charlotte is confronting and that Lyles wants to tackle are a reflection of national politics. North Carolina's urban areas generate the lion's share of the state's economy. Lyles says the state government's backlash to local progressive policies — like when the state legislature overturned Charlotte's anti-LGBTQ discrimination ordinance — is in part a backlash against economic growth in cities, which some perceive as coming at the expense of more rural areas.

"When you have areas of the state where people have lost their jobs and young people are moving away and not flourishing, that's what I think our state's wrestling with," Lyles says. "And I think that some people think they can stop that by stopping the areas that are growing, but I think you can only stop that by helping everybody grow instead of punishing those that are growing."

That sentiment is similar to how many have characterized the anti-globalization policies coming out of the White House: abandoning the Paris climate agreement; turning its back on renewable energy in favor of fossil fuels; deporting undocumented immigrants and tightening borders; and withdrawing from the Trans-Pacific Partnership trade deal.

Lyles wants to counter the push against progressive policies, at least in Charlotte, by lifting the voices of those who've been left behind or gone unheard. She acknowledges her and other Democrats won on Election Day in part because of blowback against President Trump's policies, but says she was elected because she never wavered on the issues she promised to work on and proved her commitment to her community as well.

"You have candidates who are members of the community — it's your neighbor talking, not a talking head who needs to fill a 30 second spot on television."

Kelly Dietrich, the founder of the National Democratic Training Committee, tells Bustle that while the Trump administration has certainly motivated people to run, successful candidates this year also were in tune with their communities' needs.

"People want leaders who care about their communities who are invested in their day to day," Dietrich says. "You have candidates who are members of the community — it's your neighbor talking, not a talking head who needs to fill a 30 second spot on television."

Lyles says she ultimately wants Charlotte to be a city where its communities and governing institutions each do better by the other. "That's what I want, for our city to be a place that government is trusted to serve everyone," she tells Bustle.

To that end, she intends to govern the same way she ran her campaign: by empowering her constituents and delivering local solutions to national problems. Lyles points to the never-ending push to repeal Obamacare, escalating tensions with North Korea, and the Republican tax bill that would disproportionately harm low-income Americans as particular challenges.

"When you talk about something that's local and say these are our challenges and there are going to be answers, I think that resonates with people," she says.

Reflecting on her victory, she circles back to the three issues at the top of her list: more jobs, stable and affordable housing, and community policing — "things that make your neighborhood feel good, like sidewalks and trees, but also that you feel safe that you can walk in your neighborhood," she says. "That's pretty much it. It doesn't change, I mean that's what I say every day. Every day."