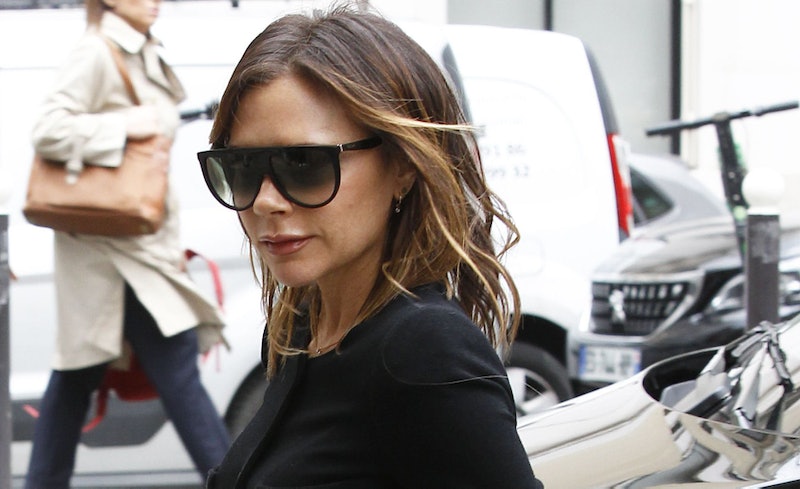 Victoria Beckham is an icon. The former Spice Girl turned designer is beloved by many who turn to her for style inspiration, makeup tips, and hair ideas. Some of us also can't get enough of VB's daily lifestyle, including the type of exercise and diet she follows. The star has, over the years, been predictably low key in her revelations, but she has spoken once or twice about the practice she follows. I've done a little digging, and this is Victoria Beckham's health and fitness routine.

Let's begin with her workout schedule, which by all accounts sounds pretty hardcore. Her most honest revelations came when she spoke to The Guardian Weekend magazine in January of this year.

As with many of the world's most successful women, Beckham is a true early riser, and makes sure she gets the most out of her morning by getting up around 5.30am-6am. She begins by doing an impressive 7k on the treadmill, which is apparently "a mix of uphill fast walking, jogging, running."

Notably, VB says that this time on the treadmill is, "the only time I watch TV – boxsets, documentaries"

While I was already impressed, Ms Beckham does not stop there. In a move that makes me tired even hearing about it, VB then works with a personal trainer after her treadmill time. "30 minutes legs, 30 minutes arms, toning and conditioning, then loads of planks and that kind of thing for my core," she explained.

While I definitely could not hack her gruelling morning exercise routine, Beckham explained that it is actually something she really likes doing these days. She described it as "a really positive thing for me. It’s part of who I am now, and I really enjoy it".

So what about what she eats? Well, she has previously revealed that she is "very, very disciplined" when it comes to her health.

In terms of dinner, Beckham told Vogue that, "generally it's a lot of fish and vegetables, [and] no milk or cheese."

She also told the publication that she tried to cut out all dairy and meat once, but she wasn't keen on it:

"I was vegan for over a year but I just felt like I didn't have the energy that you need."

For breakfast, it sounds as though VB keeps things light, opting for some apple cider vinegar (which she discussed on her Instagram stories), a green smoothie, and some healthy crunchy cereal.

And in terms of alcohol? Well, VB is very classy and refined, noting to Elle UK that her drink is "a clear sipping tequila. So you only need to have one and you're merry!"

It's clear that Beckham is super into health and fitness, and she often goes on retreats to relax and re-energise her body. A recent trip to Munich saw the designer sipping on moon water, a type of water that has been bottled on the day of a full moon. Boujee.

If you want to follow VB's health and fitness routine, it's fair to say you will need oodles of dedication. Good luck!