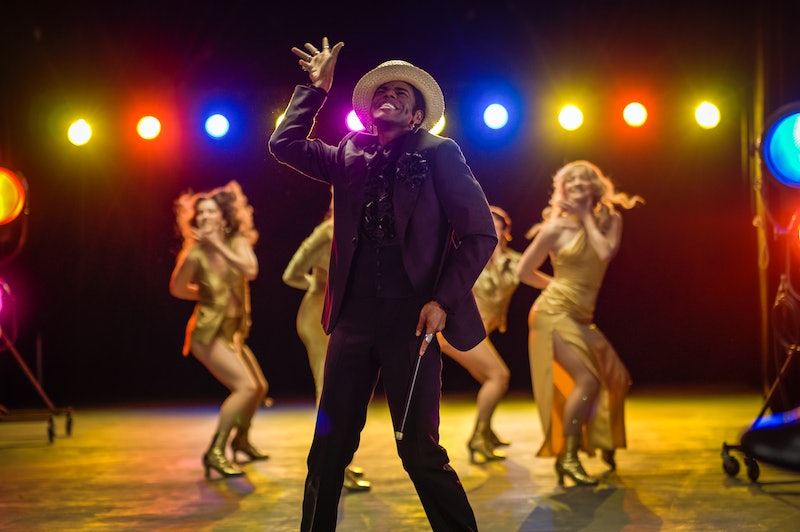 Although he had a flop with the film version of Sweet Charity in 1969, Bob Fosse was a choreography king in the early 1970s. In 1973 alone, he won Tonys, Emmys, and an Oscar. The Tony awards came courtesy of Fosse's Broadway musical Pippin, which he directed and choreographed in 1972. Sam Rockwell's Fosse told his daughter Nicole during the "Me and My Baby" episode of the FX's Fosse/Verdon series how he'd "fix" the musical. The April 30 episode "Glory" will go into how Fosse's artistic vision heavily influenced the Stephen Schwartz musical and once you watch Fosse/Verdon's version of events, you'll want to watch videos of Pippin for yourself.

Shortly after Pippin opened in 1972, Fosse told The New York Times how much he changed the show from the original script. He noted how he added the suicide and sexual elements of Pippin — which not only play a big part in the musical, but were themes of his own life. So it's fascinating after viewing Fosse/Verdon to go back and see how much of the choreographer/director's life plays into his creations.

And you'll be particularly struck by the parallels in Fosse's Pippin and his semi-autobiographical film All That Jazz, both of which feature Ben Vereen as a ringleader of sorts.

Thanks to YouTube, you can watch the original cast performing the opening scene of "Magic To Do" at the 1973 Tonys above. But the easier way to watch Fosse's Pippin is the 1981 restaging directed by David Sheehan that was done specifically for film. The New York Times reported how Vereen reprised his role for this version, but the role of Pippin was recast. Also joining this iteration for the first time was Chita Rivera, who by then had starred in the Fosse musical Chicago on Broadway with Gwen Verdon.

As you can read about in this thread on the Broadway World forums, there is some debate over the TV version of Pippin since it appears Fosse made his own cut of this 1981 performance that's more true to his original vision. But Sheehan's version of Pippin: His Life and Times is available to purchase on DVD through Amazon. So while Fosse purists may not approve, this more accessible version will still give younger Fosse fans who never got the chance to see the original Broadway version a sense of what Pippin is all about.

Not only did Fosse not direct this version, but Kathryn Doby is listed as both the stage director and choreographer for it. As Playbill reported, Doby was a dancer in Fosse productions like the stage version of Sweet Charity and was interviewed for the Fosse biography that is the basis of Fosse/Verdon. The Verdon Fosse Legacy noted that as recently as of 2015, Doby was reconstructing Fosse's numbers for the stage, so it appears she left Fosse's choreography intact. The blog Days in the Life also cited Fosse's involvement for the 1981 version in a post about his cut of the TV special, which means that Fosse fans have access to some of his most notable numbers from Pippin, like:

Fosse spiced up this number by adding two female dancers to help the Leading Player really put on a show about the perception of war. And based on the title of the Fosse/Verdon episode, it will play a large part in the FX show.

What could have been a romantic song turned into a sex-filled romp due to Fosse.

While Pippin is far from your traditional musical, the ending gets particularly bleak with the players encouraging Pippin to do one final act — that of suicide.

There also was a Broadway revival of Pippin in 2013 with Patina Miller as the Leading Player. And Schwartz told the website Broadway in Chicago how he believed that Fosse "would be thrilled" with the changes that were made to the revival and national tour. "The Fosse choreography is so iconic, and the performance of Ben Vereen was so indelible, even to people who didn’t actually see it," Schwartz said. "So it really would need a concept that was going to overcome all that without obliterating the show. And that was quite difficult to come by."

So even though you may never have gotten the opportunity to see Vereen take the stage as the Leading Player, these videos of the 1981 production give you a glimpse into just how much Fosse influenced the 1972 Tony-award winning musical Pippin.