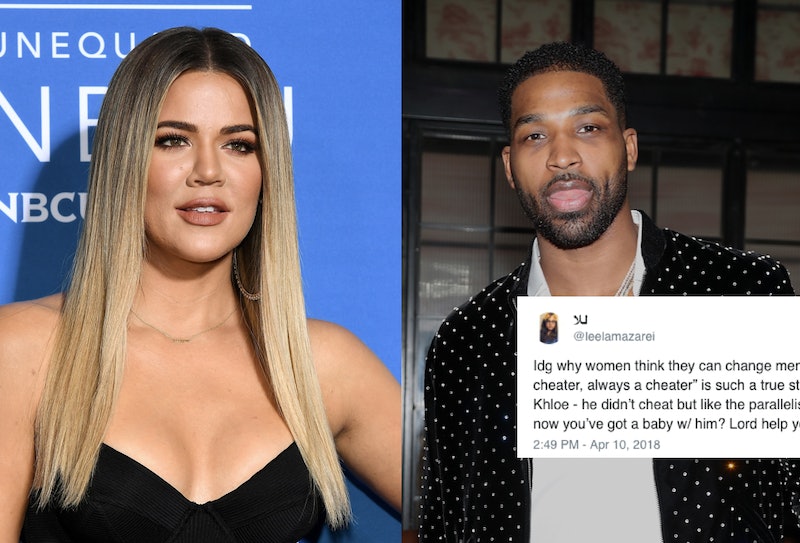 As fans already know, reality star Khloé Kardashian is pregnant with her first child with boyfriend Tristan Thompson, and she's expected to give birth later this month. On Tuesday, reports circulated that Thompson appeared to kiss another woman while in New York City last weekend. Daily Mail was the first to share grainy footage that they claim may be Thompson cheating on Kardashian, though it's difficult to decipher from the photos and video. And now, fans are blaming Kardashian and saying she should've known better, but that's a totally unfair reaction — for more reasons than one. (Bustle reached out to Kardashian's reps and Thompson's agent for comment on the rumors, but did not receive an immediate response.)

Before even diving into those reasons, it's worth emphasizing that it has not been confirmed that Thompson cheated on Kardashian. Until either of them comment on the situation, or the video quality suddenly becomes crystal clear, this simply remains speculation. To bash Kardashian over something that isn't even guaranteed to be true is a little ridiculous in and of itself.

On top of that, it feels incredibly insensitive, since Kardashian is currently in her ninth month of pregnancy. Last December, she announced she was expecting a child with Thompson in a message filled with joy and celebration. Along with a black-and-white photo of the pair cradling her baby bump, she wrote,

And while Thompson was in New York this past weekend, reports have circulated that Kardashian has been at home, preparing to give birth. Even on her own social media accounts, Kardashian has posted about just wanting to give birth already and how close that is to happening. She has her hospital bag ready to go, based on a recent post on her app. Imagine being her, stuck inside reading tweet after tweet of people attacking her over something that she has no control over, nor has it been confirmed as fact.

Just as a quick catch-up, Thompson and Kardashian began dating in September 2016 while the NBA player's ex-girlfriend Jordan Craig was pregnant. Craig gave birth to her and Thompson's child in December 2016. The circumstances of their split remain unclear, but that's not really anyone's business anyway. Still, the gist of the vibe on Twitter is that this could be a trend of Thompson leaving his pregnant girlfriends — but again, no cheating is confirmed, nor does anyone truly know what happened with him and Thompson. And either way, it feels like a low blow, especially if you take either woman's feelings into account.

Still, the lack of concrete answers hasn't stopped people from claiming, "Once a cheater, always a cheater." And people didn't exactly spare Kardashian's feelings when tweeting out their own.

In fact, plenty of Twitter users were quick to say this was some sort of karmic payback, which again, feels utterly unfair. No one deserves to be cheated on in the first place, and calling it "karma" doesn't help.

On the plus side, there were some fans who had Kardashian's back and pointed out why now is not the time to be attacking her, or her relationship.

Given Kardashian's history of speaking out to defend herself and her loved ones, it's likely only a matter of time before she weighs in on the rumors in her own way. But in the meantime, it'd be better to keep the negativity and blame game to a minimum.