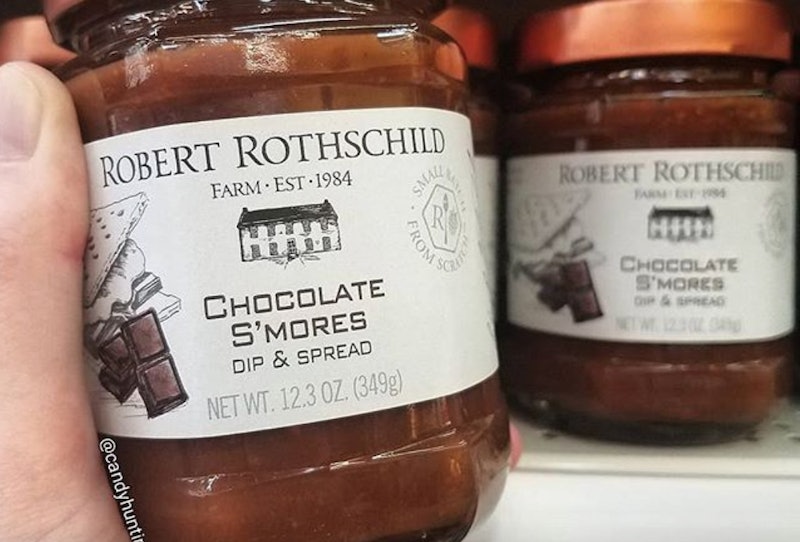 Things are getting classy as heck at Walmart, so it's time to strap in. If you're a lover of all things chocolate, marshmallow, and delicious, then the new Chocolate S'mores spread on sale at Walmart is going to be right up your street. Spotted by Instagrammer @Candyhunting, the Robert Rothschild Chocolate S'mores Dip And Spread looks like the perfect way to keep those summer vibes going all year long and to be able to enjoy the delicious s'mores flavor whenever. It ain't cheap, but it looks delicious.

"Walmart is getting fancy with this new $7 Chocolate S'mores spread!" the post reads — and it looks pretty darn fancy indeed. In fact, according to the label it can be used as a spread or as a dip — which basically means that there's a lot of s'mores goodness heading your way, no matter how you want to eat it. I would also recommend "to be scooped with a spoon" being added to the official uses, but I'll let you find your own way.

It's not the first fancy-schmancy dessert product you can get from this brand at Walmart. You can already get the Robert Rothschild Dessert Topping Chocolate Caramel & Sea Salt, which they sell at just under seven bucks for a delicious-looking jar, along with plenty of other mustards, sauces, and preserves.

It's good to know that if you don't have a roaring fire and a stick to hand, you can still enjoy some s'mores goodness. In fact, s'mores have been everywhere this summer, so I'm almost surprised we haven't seen more dips and spreads like this making an appearance — the demand is clearly there.

You could say that 2019 was kind of the year of the s'mores takeover. Firstly, there were the weddings s'mores bars making a big splash on the nuptials circuit — which is maybe the most Instagrammable dessert bar you could possibly have for your wedding. Then, things got personal with the Hershey's S'more Caddy which exists solely so you can carry around you s'mores ingredients with you in case of a s'mores-based emergency. I presume the emergency is... you really, really need some s'mores. But this year, people got serious about their graham cracker, marshmallow, chocolate combo real quick.

So it's not at all a shock that there are suddenly more and more s'mores-flavored products available. I was personally delighted at the appearance of S'mores Coffee Creamer from International Delights, so you can start every day with that chocolate, marshmallow, graham cracker twist. But the really exciting development was Target's S'mores Frosted Sugar Cookies. Those slightly cardboard-tasting sugar cookies with frosting are either the best or worst thing in the world, depending on who you ask (I say best) and the s'more variety is spot-on for summer.

There are a lot of reasons to love the nostalgia-filled deliciousness of s'mores — which are objectively delectable but also manage to taste like the purest of childhood memories. If you want to enjoy your s'mores far after the summer nights fade away, then you might just want to head down to Walmart to stock up on the Chocolate S'mores Dip And Spread. It will keep your warm through those long winter's night, whether you have it as a spread, dip, or just straight-up with a spoon.