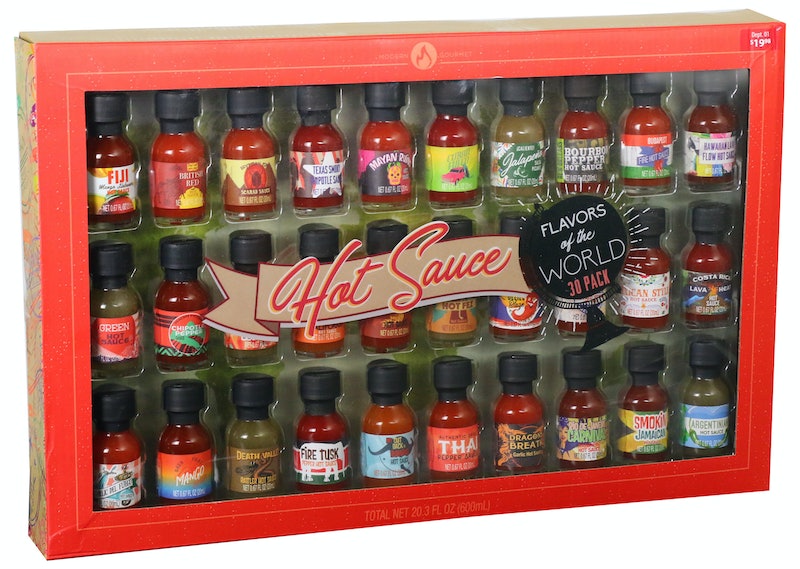 This holiday season, Walmart is releasing a World Wide Hot Sauce gift pack that comes with 30 different mini bottles of hot sauce that pay homage to spice from different parts of the world. If you know someone whose love language is “spicy things,” this will be just the holiday gift for them.

Each bottle of the 30-pack gives you 0.67 ounces of global spice from “Texas Smoky Chipotle Sauce” to “Fiji Mango Jalapeno Hot sauce” to “Rio de Janeiro Carnival Habanero Hot Sauce.” For $19.98, you can gift yourself or someone else the joy of trying a different spicy sauce nearly every day through the month of December. Per an emailed press release, Walmart says the gift set is “perfect for anyone on your list who loves spice.” It is also perfect for anyone who wants to redirect any awkward family conversations to, “Hey, who wants to try something super spicy?”

The hot sauce gift set includes mini bottles from around the globe, including Argentina, Costa Rica, Jamaica, Thailand, Britain, and Budapest. It also has a handful of sauces from our own backyard, like the “Hawaiian Lava Flow Hot Sauce.” If you’re wondering whether America’s hot sauces can stand their own when compared to spicy giants like Thailand or India, I suppose that depends on your spice tolerance.

In a survey released at the beginning of the year, Food & Wine ranked the most popular hot sauce in America. The results were a range of mild to kinda spicy to...yeah, OK, I guess Americans prefer a pretty low level of spice. At least in comparison to the spice capitals of the world. Texas Pete and Taco Bell’s hot sauce both made the list which, as Food & Wine notes, tend to fall on the more mild side of the spicy scale. Huy Fong Foods Sriracha—which is green-capped bottle you most likely think of when you hear “sriracha”—was number three on the list and one of the spicier options at 1,000 and 2,500 units on the Scoville scale.

Frank’s Ret Hot took the number two spot, though the original version of the sauce is pretty mild at about 450 Scoville Heat Units. What claimed the number one spot? The Mexican hot sauce Cholula. Getting its kick from arbol and piquin peppers, Cholula ranks at about 1,000 heat units on the Scoville scale. For comparison, a habanero pepper, which is used to spice Rio de Janeiro Carnival sauce, falls around 100,000–350,000 SHU.

In other words, if you’re looking to really expand your spicy palate—or just conduct your own “Hot Ones”-style interview over the holidays—Walmart’s World Wide Hot Sauce has 30 bottles of spicy sauce that will be just your thing.