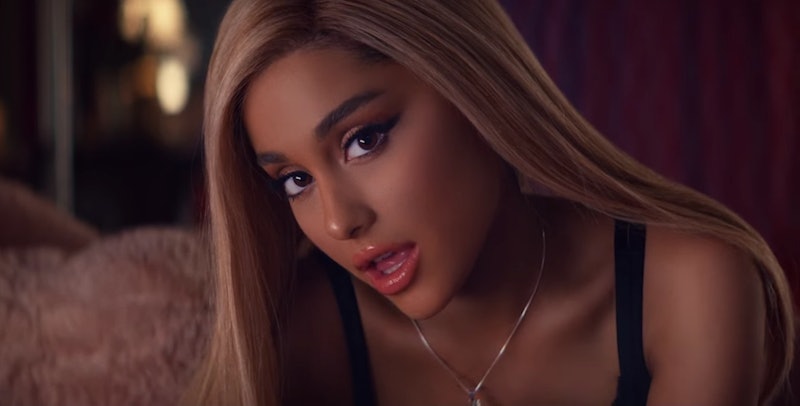 "Thank U, Next" topped the charts, broke records and became a pop cultural phenomenon overnight, which means that many fans of the song have one big question about the track's total domination: Will Ariana Grande be nominated for a Grammy for "Thank U, Next"?

Despite the fact that Grande's breakup anthem became her first number-one single, and the music video broke Vevo records thanks to its many homages to rom coms of the early aughts and a scene-stealing cameo by Kris Jenner, fans will probably have to wait until next year to find out if the song will also add a Grammy nomination to its list of accolades. According to the Recording Academy, in order to be considered for the 2019 Grammy Awards, a song needs to be released before Sep. 30, 2018, which means that "Thank U, Next," — which Grande dropped as a surprise on Nov. 5 — is not eligible for a Grammy this year.

Of course, there's no way to predict whether or not Grande will earn a Grammy nomination next year, but "Thank U, Next" has made a huge impact in the four weeks since it's release. The single remains high on Billboard's Hot 100 list after spending three weeks at number one, and even the behind the scenes video Grande released has amassed almost 3 million hits on YouTube in just three days.

Sure, a song or album's popularity or chart position doesn't necessarily mean that it will earn a Grammy nomination, but the awards tend to honor projects that have made a major impact in the last year, which "Thank U, Next" definitely did. In addition, many of the solo performance and Song of the Year categories tend to highlight songs that have spent a lot of time on top of the charts, which should bode well for Grande, based on the success of her latest single.

And the Thank U, Next album is also bound to be a hit. In a recent interview with Billboard, Grande said she will get even more "honest" on her upcoming project. The singer, who described her new music as inspired by "feminine energy and champagne and music and laughter and crying," is already impatient to release her new album. Just three days before the 2019 Grammy nominations were announced, she tweeted at Republic Records, telling them to "hurry yo ass up," presumably to finalize the album for release.

With "Thank U, Next" dominating the charts and a new album just on the horizon, Grande isn't showing any sign of slowing down. And Grammy nomination or not, she's going to keep giving fans the music they deserve.