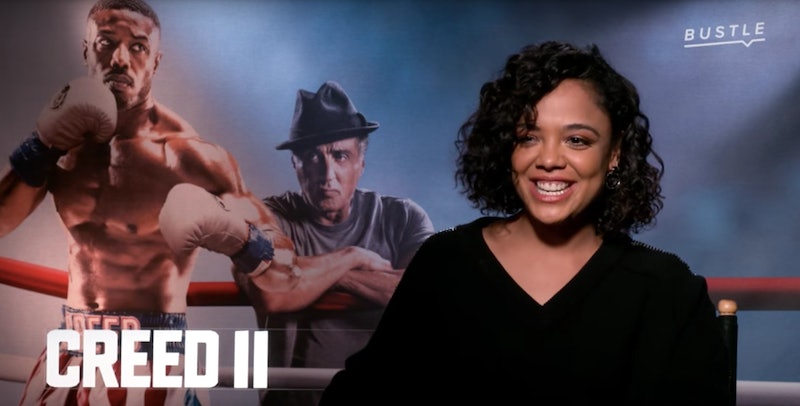 Adonis Creed (Michael B. Jordan) and Rocky Balboa (Sylvester Stallone) may get the majority of the headlines when it comes to the Creed franchise, just as the return of Rocky IV's Ivan Drago (Dolph Lundgren) and the addition of his son Viktor (Florian Munteanu) are getting a lot of attention in Creed II. But it should go without saying that the franchise would be vastly different if it weren't for Tessa Thompson. Her performance as Bianca Porter in Creed and Creed II is in many ways the heart of the series, helping to anchor the films in a deeply emotional reality.

Bianca is not your average love interest in a mostly male-targeted sports movie. She's a complex character with her own struggles and ambitions. As a singer and songwriter, Bianca is able to tell her story and express her feelings through song. But as she's suffering from progressive hearing loss, she's also someone who knows her livelihood has an expiration date, and she has to deal with whatever feelings arise from that reality. Portraying a character who has to take on the role of romantic support for the film's lead while also going through her own significant personal struggles is challenging enough, but when you add in Bianca's musical element, the role becomes even more daunting. Thankfully, Tessa Thompson was up to the task.

Thompson actually co-wrote songs for her character to perform in both Creed and Creed II, going above and beyond what's normally asked of actors. It doesn't hurt that the 35-year-old actress actually has some experience in the music world. She was previously a singer in the indie electro soul band Caught a Ghost, and she sang on their 2014 album Human Nature. And in an exclusive interview with Bustle's Olivia Truffaut-Wong, Thompson reveals the process she went through in writing songs for Creed.

"The first time around I really started with this idea of, 'Oh, I'm writing for a movie,' and so I sort of had this idea of what it should sound like," Thompson told Bustle. "Ludwig [Göransson, Creed composer] and I would send those tracks to Ryan Coogler [Creed director], and he was like, 'Don't like it.' And then when I just started writing from a place of what I wanted to talk about ... that's when it got into a sweet spot."

She also discusses how her writing process evolved for the sequel, and how she was able to embody Bianca's mindset more accurately. "This time around I really wanted to speak more to what was happening in [Bianca's] life, so one of the songs that you see her perform in the film is called 'Time Tick' and it really is about this idea of having a ticking clock, which has to do with her progressive hearing loss and some of the stuff she's dealing with, so I think I was writing more solidly from a place of where she's at," Thompson said.

To see more of Thompson's interview with Bustle, including her thoughts on how Bianca expands the representation of black culture on screen, take a look at the video below:

Creed II is in theaters now.