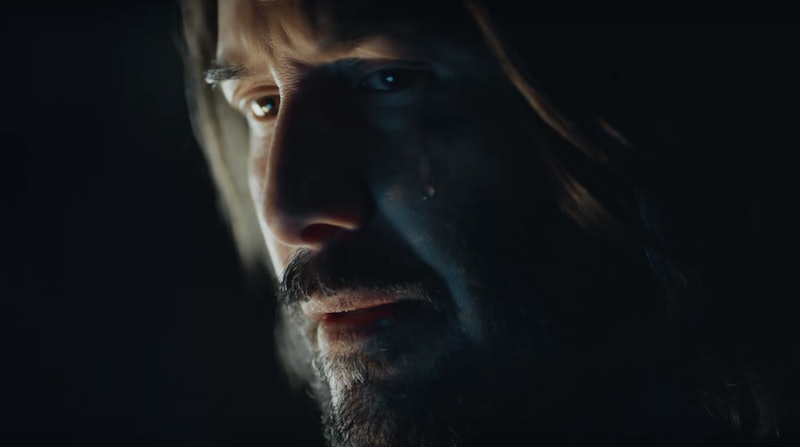 —Every year, companies shell out a ton of money to snag a coveted ad spot during the big game. There's the good, the bad, and the completely forgettable — but here are the best Super Bowl commercials from 2018.

Most of the commercials aired during this year's Super Bowl featured big-name celebrity superstars — that alone, though, does not necessarily make an ad great. Sure, you might perk up and point excitedly when you see (insert your favorite celebrity here) make an appearance on but will you remember what they were hawking tomorrow? If you don't, it probably wasn't all that great.

But these ads, well, these ads were great. And in some cases, really great. From Keanu Reeves for Squarespace, to Morgan Freeman and Peter Dinklage for Doritos Blaze and Mountain Dew Ice, plus a few more favorites that you can watch below — Here are the best ads that were aired during the 2018 Super Bowl.

Every aspect of this ad is amazing. Keanu "Sad Keanu" Reeves heads to the desert to find a tranquil spot for building a website about his motorcycle company. He's brooding, contemplative, motivational, and also, apparently, fire-proof. The whole thing is hysterical in a very unexpected way. I laughed, I cried, and now I have to figure out what the hell I'm going to do with this website I just bought.

These ads — in which Peter Dinklage (coached by Busta Rhymes) and Morgan Freeman (coached by Missy Elliott) prepare for and then compete in a karaoke rap battle — started making the viral rounds well-before the big game, and for good reason. Both actors are incredibly impressive in their abilities — Dinklage spits Busta Rhymes' lightening-fast verse from "Look At Me Now" by Chris Brown, Freeman raps a verse from Missy Elliott's "Get Your Freak On" — but Dinklage's performance is kind of tough to beat. If the whole acting thing doesn't work out for him, he could definitely give Rhymes' a run for his fast-rapping money. Eat your heart out, Lip Sync Battle.

This one stands out based on sheer weirdness alone. "Big Time Hollywood Actor" Chris Elliot is hawking Avocados From Mexico, and at no point does he provide any information about what makes avocados grown in Mexico better than all the rest. However, if given a choice, I'm definitely going to buy one of these over all the rest — and I fully expect my avocado from Mexico to give my life "more beauty, more joy," and a bunch of flowers that bloom into Elliot's laughing face.

This ad for Amazon's Echo is stacked with celebrities (Gordon Ramsay, Cardi B, Rebel Wilson, Sir Anthony Hopkins) and it definitely doesn't disappoint. One of the things that makes this ad so great, though, is how each cameo really plays to the star's personality — they're not just mouthpieces for the product. Also, Cardi B just straight-up kills this line: "This guy wanna go to Mars! For what? There's not even oxygen there!"

Tiffany Haddish — admitted fan of the app for which she's now the face of — brings the funny in this ad for Groupon, which, aside from saving you money, simultaneously supports local businesses. If, for some reason, you're the kind of person who doesn't want to support local businesses, however, you may change your mind after watching this commercial.

Chris Hemsworth and Danny McBride star in this trailer for a new film in the Crocodile Dundee franchise. Wait, no. Just kidding. It's an ad promoting tourism in Australia. But, hey! The real Crocodile Dundee (Paul Hogan) does make an appearance.

Fans on Twitter couldn't get enough of David Harbour's Tide ad. The Stranger Things star stole the show with this very self-aware commercial for the detergent brand that seemingly mocks all other sorts of ads — whether car, beer, or diamond commercials.

OK, so this one is for a TV show instead of a brand, but fans finally got to see a sneak peek of the upcoming season of the HBO hit. Not only that, but people obsessed over the usage of Kanye West's "Runaway" — leading to the brilliant hashtag, #KanyeWestworld. Gotta love the internet.

The full trailer for the Han Solo spinoff doesn't drop until Monday, but this first look at the movie sent the Twitterverse into a tailspin. Fans couldn't get enough of it — specifically, they're already obsessed with Donald Glover's Lando Calrissian. (And really, who can blame them?)

Sure, these aren't the only ads that aired during the big game. But these are bound to be the biggest hits. Now you can rewatch them to your heart's content.