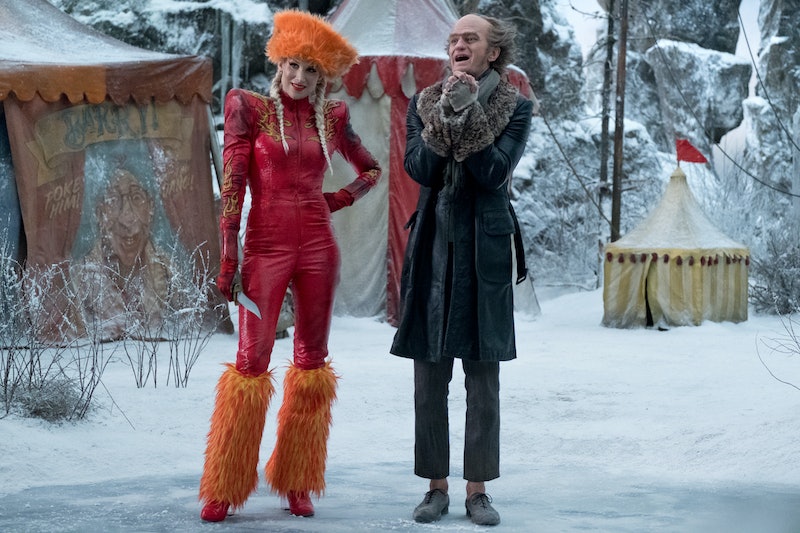 Spoilers ahead for A Series of Unfortunate Events through Season 3. There's a fine line between feeling bad and feeling bad for not feeling worse. As a woman who grew up adoring the books, watching A Series Of Unfortunate Events in 2019 is harder than I ever thought it would be. I feel conflicted and disappointed marathoning this final season, given the allegations against the author of the books and creative mind behind the Netflix adaptation, Daniel Handler. Not only am I forced to confront the less than noble aspects of a writer I admire, I'm confronting the less than noble aspects of myself, since I also very much want to continue enjoying his work.

Early in 2018, Handler was accused of making sexually inappropriate remarks at various professional events. (Bustle's request for comment about the allegations was not immediately returned by Handler's representatives.) The author later apologized, yet also noted that his sense of humor is "not for everyone." He then stepped down from a commencement speech opportunity amid student protests stemming from the allegations.

Before that, in 2014, Handler made a racist joke at the National Book Awards. While presenting an award to as black female author, Jackie Woodson, he made a "joke" about her that was steeped in dangerous racist stereotypes. Woodson responded with a New York Times op-ed titled "The Pain of the Watermelon Joke," calling him out for "making light of that deep and troubled history" of racism in America. Handler apologized and donated to We Need Diverse Books.

These allegations are not enough to stop me from enjoying ASOUE and Handler's writing — particularly because the books were important to me, and the values of the work itself still align with my own. However, I do take them seriously, and I don't wish to put a value on the severity of various allegations for anyone other than myself. It is entirely your prerogative whose art you do and do not choose to separate from the artist.

That said, Season 3 is the first time I've truly grappled with Handler's work since the most recent adaptations, and some things did stick out. Kit Snicket's death troubled me in particular; in the finale, she refuses the antidote to a poison because it might harm her baby in utero. Putting the fetus' life before her own felt just a tad paternalistic coming from the same male writer who joked about a woman's virginity at a publishing conference. I'm not a kid anymore, and I consider Handler's public persona as context for the work now, rather than accepting plot choices as if they appear by magic. It's disappointing that a man wrote this kind of death for a lead female character — and that specific turn of Unfortunate Events is bleaker than intended for me, because I'm viewing it now as an adult woman living in a world where leaders, grownups in charge, are threatening my own reproductive rights.

Handler's involvement aside, ASOUE is a progressive series, beginning with its protagonist Violet — whose passion for inventing shows young girls they can excel in STEM subjects. The Netflix series, which does have women, including women of color, on the writing staff, also "corrects" some problematic aspects of the novels Handler wrote in the adaptation. For example, Count Olaf's "Henchperson of Indeterminate Gender" has become a commentary on the gender spectrum rather than a joke about not being able to "tell" a person's gender, as it is in the books. In addition, Lemony's relationship with Beatrice is shown to be mature and consenting, whereas when told solely from Snicket's perspective in the books, his doting on a dead woman who married someone else could come off as creepy.

It's easy when you read A Series of Unfortunate Events as a young person — even an intelligent one who decoded the secret messages and understood the literary allusions — to buy into the Baudelaire's plight that adults are all either incompetent or against them and that they can only be one thing or the other.

It's difficult, as an adult, to still feel like the adults in charge of the world are incompetent and against me, and to lose faith in the author who literally wrote the books about why kids shouldn't trust grownups unconditionally. At the end of the story, ASOUE introduces moral relativism, the idea that even in their fantasy world, the adults that disappoint or terrorize them have done both wicked and noble deeds in their life. Those books used to make me feel better about the world. Now, watching the Netflix adaptation, I can't stop considering Handler's reportedly bad actions and feeling slightly guilty that I'm enjoying it anyway. Handler created works of art that respected children, but in the real world, he has belittled adults with less privilege than he has himself.

Because what's also difficult, when revisiting A Series of Unfortunate Events, is realizing that I, too, may have become one of those idiotic, well-meaning, and well-read adults who is disappointing someone, somewhere, at any moment.

"You're a wicked man," Kit says to Count Olaf in The End. "Do you think one kind act will make me forgive you for your failings?" Handler's use of donations to make up for his comments (he also used the per diem money Netflix gave him on the ASOUE set to publish works by emerging poets with diverse voices) are seemingly kind acts from a problematic man whose work I have enjoyed for most of my life. He's kind of good, and kind of bad. Relearning that lesson — that you can't split people up into simplistic moral categories — along with the young Baudelaires in Season 3 is not something I expected to happen as I watched as an adult.

There are plenty of white male creators and performers whose work I can no longer enjoy, or tolerate, in light of allegations uncovered in the #MeToo and #TimesUp era. For the most part, Handler still isn't one of them for me. It may be, in my case, because nothing he has reportedly done or said is illegal and I trust his apologies in both cases. There may be someone out there that you're choosing not exactly to defend, but not to completely give up on, as well, when it comes to consuming entertainment. Getting into the specifics of what we each do and do not consider to be "that bad" only belittles someone else's experience and isn't a productive conversation. Sadly, that then may mean that I am complicit in systems that allow privileged men to be forgiven too easily. Many of us are.

Because what's also difficult, when revisiting A Series of Unfortunate Events, is realizing that I, too, may have become one of those idiotic, well-meaning, and well-read adults who is disappointing someone, somewhere, at any moment. Am I a wicked person for not "canceling" Handler in light of these allegations? Am I "noble" for bringing them up at all? Just because I am an adult does not mean I am trustworthy. Children like the Baudelaires know this, but sadly, ASOUE has shown me that we all seemed doomed to forget it as we grow older.