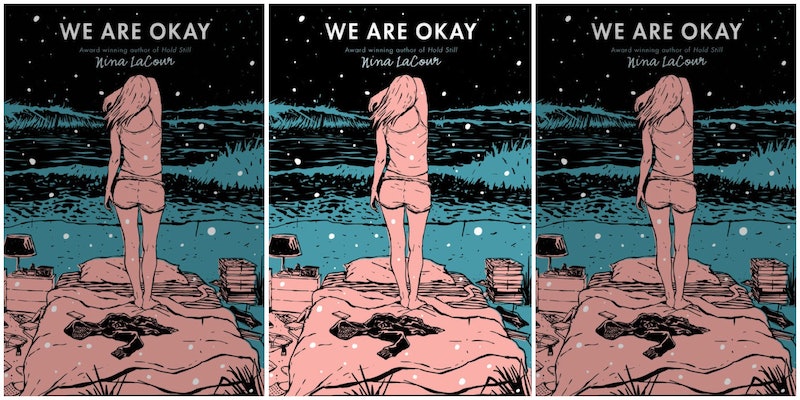 The Young Adult Library Services Association (YALSA) announced the recipients of the 2018 Michael L. Printz Awards on Monday morning, so young adult fans now have five great books to add to their TBRs. Nina LaCour's We Are Okay is the best YA novel of the year, according to librarians, and it's joined by four Printz Honor titles you should check out as well.

The Printz Committee chooses one novel to receive the Michael L. Printz Award for Excellence in Young Adult Literature every year. The committee also "names up to four honor books, which also represent the best writing in young adult literature," according to the YALSA website.

Nina LaCour's We Are Okay introduces readers to Marin, a college freshman spending winter break in her dorm room, waiting on a visit from her BFF, Mabel. Even though she's lonely in New York, Marin dreads this reunion, because she knows she'll have to explain why she left California without saying goodbye, and that she and Mabel will finally be forced to talk about their shared history. As a Printz Award winner, We Are Okay joins a long list of previously recognized YA books, including March (2017), I'll Give You the Sun (2015), American Born Chinese (2007), and Monster (2000).

The four 2018 Printz Award Honors will go to Long Way Down by Jason Reynolds, Strange the Dreamer by Laini Taylor, The Hate U Give by Angie Thomas, and Vincent and Theo: The Van Gogh Brothers by Deborah Heiligman — all of which have been nominated for, and received, a variety of other literary awards.

Long Way Down is a lyrical novel about gun violence. After Shawn is shot and killed, his brother Will takes the dead young man's gun and sets out to get his revenge. But as he takes the elevator down to the ground level of his apartment building, Will meets the ghosts of his past, each of whom was killed in an act of gun violence. Long Way Down was nominated for the National Book Award for Young People's Literature and the Edgar Award for Best Young Adult.

In Strange the Dreamer, librarian Lazlo Strange has always dreamed of a legendary city called Weep, which was cut off from the rest of the world long ago by the invasion of the magical Mesarthim. Godslayer Eril-Fane defeated the Mesarthim, but now it's time to liberate Weep, and Lazlo could be a member of the rescue party. Strange the Dreamer was nominated for the Goodreads Choice Award for Young Adult Fantasy & Science Fiction.

The Hate U Give centers on Starr, a black student at a majority-white prep school, who sees her childhood BFF, Khalil, killed by police. Khalil was unarmed, and his death sparks a national outcry, but Starr and the officer who killed her friend are the only people who know what really happened that night. In order to tell the truth, Starr will risk her school friendships, and maybe even her life. The Hate U Give was nominated for the National Book Award for Young People's Literature and the Edgar Award for Best Young Adult, and won the Goodreads Choice Awards for Young Adult Fiction and Debut Goodreads Author.

The Hate U Give by Angie Thomas, $11, Amazon

The only work of nonfiction among this year's Printz Award Honors, Vincent and Theo focuses on the relationship between 19th century painter Vincent Van Gogh and his brother, Theo, to whom he wrote more than 650 letters. Drawing from those letters, Deborah Heiligman revives the Van Gogh brothers in her 2017 biography. Vincent and Theo won the Golden Kite Award for Non-Fiction for Older Readers.

Add these books to your TBR now, because there's already plenty more young adult novels on their way for you to read in 2018.