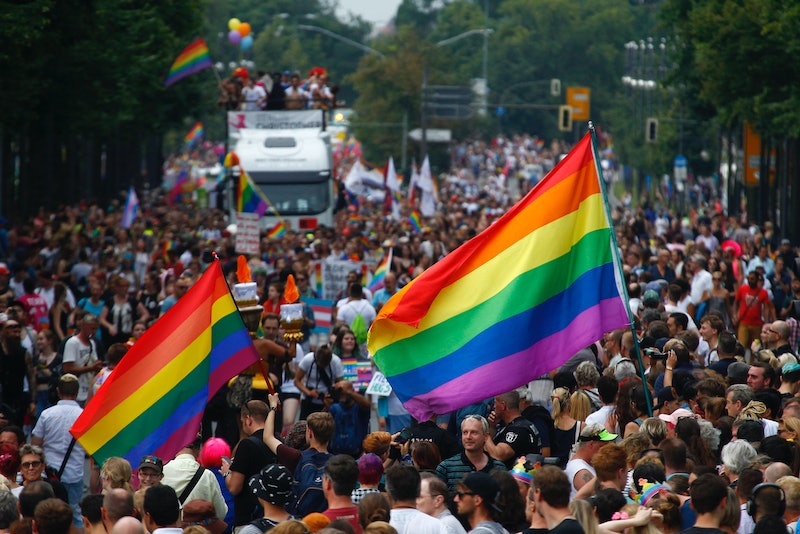 “Am I too young to know who I love?” my 14-year-old sister recently asked me over the phone. She had left her math class to call me, and even from across the country, I could hear the unease in her voice. Recently, a friend of hers had come out as queer, and had been told that teenagers were "too young" to really know their sexuality — a statement that had perturbed my sister and her friends. Though more and more teenagers are exploring their identities than in generations past, adults aren't giving them the support they need to do so.

As a queer young adult, I've experienced this stigma, too — and can relate to these disconcerting conversations about sexuality all too well. As someone who didn't have the courage to come out as queer until college, I still find that many people in my life ask me for an "explanation" as to why I seemed to present as straight throughout high school. At this point, I have almost memorized various auto-pilot answers for when someone asks me, "What about that boyfriend you had freshman year?" When I'm asked something like this, it implies that, because I came out after I was a teen, my sexuality is less valid — but my sister, at 14 years old, and her friends are told that they're "too young" to know their sexualities because they're still growing into themselves. So what gives?

According to a recent study published by trend forecasting agency J. Walter Thompson Innovation Group, only 48 percent of Gen Zs identify as exclusively heterosexual, compared to 65 percent of millennials aged 21 to 34. This report suggests that teens are more likely to identify as queer than straight, a statistic that seems to be bolstered by the influx of brands creating youthful campaigns centered around LGBTQ+ voices for Pride month. Even YouTubers, many of whom my little sister and her friends look up to and idolize, are creating video content exclusively for this month with the sole purpose of broadcasting their support of LGBTQ+ teenagers. All of this public pride-related publicity leaves teens with positive messages encouraging them to be themselves unconditionally. However, when many of these teenagers put their phones down and have conversations about their identities, they are faced with many parents, politicians, and school systems that do not know how to support this educated and empowered generation, and even when they're well-meaning, their words invalidate our experience.

Of course, it needs to be said that for too many LGBTQ teenagers and adults, it still isn't safe to come out and be themselves unconditionally: in 2017, the Daily Beast reported that LGBTQ youth are two to three times more likely to experience bullying or harassment in school, and the prevalence of "bathroom bills" continues to threaten transgender or gender non-conforming students who just want to use the bathroom in peace. There are a million stigmas that LGBTQ teens face, many of which can have harmful or outright dangerous consequences; it's a privilege, of a kind, to worry about how an adult's reaction to someone's coming out will be invalidating, rather than physically unsafe. But these invalidating messages, no matter how they're intended, can be directly harmful to one's mental health, to one's sense of safety as they move about the world. To have an arbitrary timeline imposed on the process of self-discovery can be incredibly harmful to an LGBTQ teenager's sense of self.

Everyone, regardless of age, deserves the space to probe at their evolving identities without judgment. Sexuality isn't static, nor dependent on a particular timeframe. Teenagers should be in class, learning, rather than worries about how others will perceive the young adult they are becoming.

This is why we need to stop telling teenagers they're too young to understand their sexuality. Adolescence is already filled with change, loss, and confusion. Questions during this time are inevitable, but this doesn’t mean that at any given moment anyone is less themselves. Listen to teens when they trust you with that information.