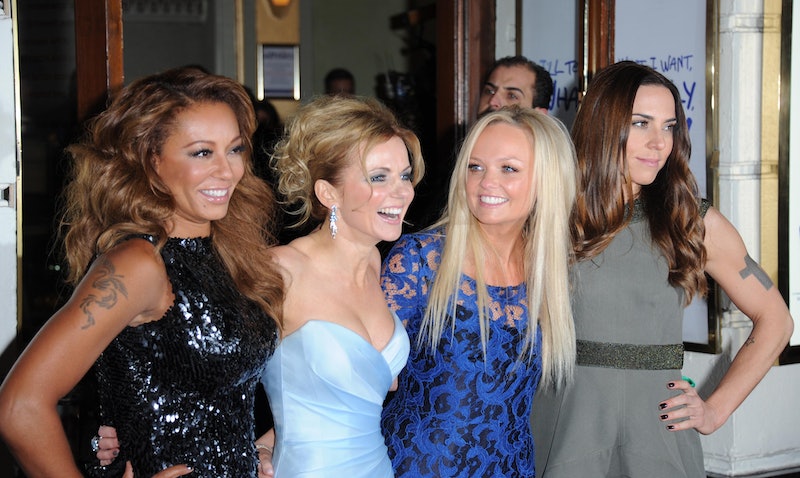 In an Instagram post of the Spice Girls' cheeky reunion video, where the girls end up singing "Spice Up Your Life," Halliwell's caption quickly went viral thanks to a very specific revelation. “@spicegirls -hai-Si-ja-hold tight #spicegirls #tour2019," she wrote before shouting out the three other Spice Girls — Baby Spice, Emma Bunton; Scary Spice, Mel B; and Sporty Spice, Mel C — hitting the road with her.

As Entertainment Tonight pointed out, fans on Twitter started noticing that these words weren't familiar to them. And it wasn't long before they realized that they had been singing the song wrong their whole entire lives. "WHAT!??," a fan named @claire3979 tweeted. "How did I not know the correct lyrics?? All these years I've thought it was 'Ha, See Ya hold tight.'"

While it may sound like that's what they're saying in the classic "Spice Up Your Life," in fact, the real lyrics are just the women singing the word "yes" in three different languages: Japanese, Spanish, and German. "Hai, Si, Ja" indeed.

It was a common misconception for two decades that the Spice Girls were singing something totally different, so it's no surprise that some fans' minds were blown by Halliwell's big reveal. "I was today years old when I found out the lyrics weren’t 'ha, see ya, hold tight,'" user @davidbaines1 tweeted. "I get it now, yes in different languages. Genius."

As smart as the real lyrics may be, some fans don't want to see the old ways of singing it die. "Sorry no I categorically refuse to believe the lyrics are 'hai si ja' and not 'hi see ya,'" a fan named @joegunn tweeted, which let's be honest is a very spicy response.

It's likely the Spice Girls don't really mind if you fudge the lyrics a bit, they're just happy to be back. In a press release announcing the Spice Girls' reunion tour, Bunton said, "It’s time to spice things up all over again! I can’t wait to perform to our forever supporting fans and a whole new spice generation! Love you all.”

It's especially exciting considering how much change the group has gone through in the last two decades. Halliwell left the band in 1998, cutting the Spice Girls down to four, but now she's back and apparently ready to drop some knowledge. Who knows what else she'll reveal during the six-date tour, which kicks off in June 2019 in Manchester and ends in London on June 15.

Unfortunately, this tour won't feature Posh Spice, Victoria Beckham, but she's as excited to see the Spice Girls hit the road as anyone. "Being in the Spice Girls was a hugely important part of my life and I wish my girls so much love and fun as they go back on tour," she wrote on Instagram following the reunion tour announcement. "I know they will put on an amazing show and the fantastic fans past and present are going to have a wonderful time!"

The Spice Girls instead will add Jess Glynne as a touring member, who hopefully now knows the right lyrics to "Spice Up Your Life."