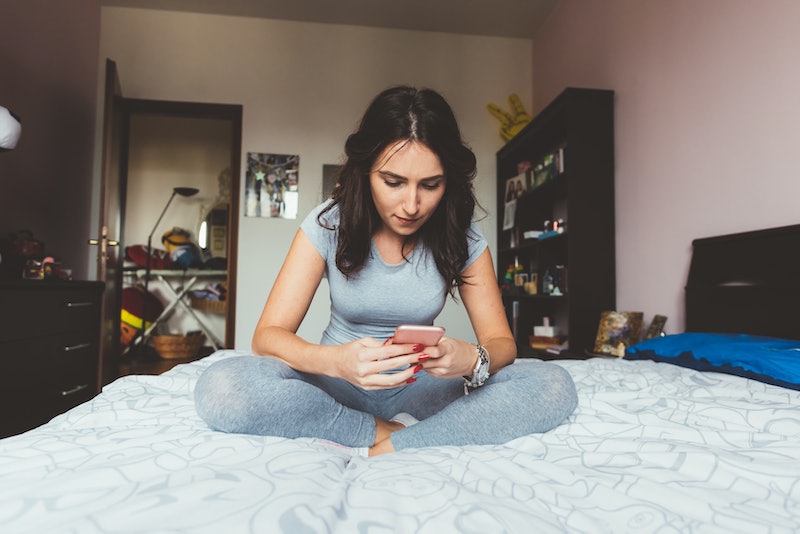 As a former online dating fanatic, I can personally attest to how exhausting it is to be a woman on a dating app. All those stories you hear about women getting rude, lewd, and downright offensive messages from men online isn't just hyperbole — it's a real issue that women on dating apps face every day. But just because we've become accustomed to deleting unsolicited d*ck pics and being body shamed for rejecting someone does not mean we have to accept or tolerate that behavior... and it seems like one popular dating app totally agrees. A new Tinder feature called Tinder Reactions — launching October 4 for all iOS and Android users — is aiming to help women combat bad behavior online by giving them a new, more powerful way to express their feelings.

"Reactions speak louder than words," a Tinder spokesperson tells Bustle. "Female Tinder users now have a chance to use our exclusive-to-Tinder animations instead of text replies to get their point across when they interact on the app." So what are Tinder Reactions? They're an assortment of animations that take over the conversation screen, which you can use instead of the standard text replies as a way to add an extra oomph to your messages. As of the feature's launch, female-identifying users will have access to eight different reactions, both negative (like throwing a martini) and positive (like a round of applause).

"We wanted something more interactive and expressive than an emoji, GIF, or simple text message, so we started to think big picture, literally," the spokesperson says. "It made a lot of sense to have the Reactions be full-screen animations — they add life to a conversation. The animations are light and fun but still get the message across whether the reaction to a Match warrants, say, applause or a martini to the face."

How Tinder Reactions Can Help

Aside from looking cool and being fun to play around with, though, can something like Tinder Reactions really help women combat bad behavior on dating apps?

"All the Reactions that we created and included in this release were a direct result of feedback from women."

"Unwelcome behavior is an issue women face all the time — whether it happens from behind a screen or in real life," the spokesperson says. "Reactions help women call out unwelcome behavior on the app. To build Reactions, the women of Tinder got together and talked about their experiences and how they might react to similar scenarios in real life. We also conducted focus groups with our users. All the Reactions that we created and included in this release were a direct result of feedback from women."

Even though, of course, sending a jerk a Reaction of you throwing a martini in his face might not really change his behavior, it's nonetheless important that women are being given a tool that's specifically intended to improve their experience and empower them to call out bad behavior. It might not totally eradicate bad behavior on dating apps, but it's a positive step forward in helping women (and everyone!) feel safer and more in control of their online dating experience.

Are Tinder Reactions Only Available To Women?

Although the feature was created for women, by women, it's not only ladies who have access to Tinder Reactions. According to the spokesperson, male-identifying users will have also access to Reactions, although they won't have as many to choose from as female users.

"Just like in real life, bad behavior can come from anyone at any time," the spokesperson says. "Like all of our features, we looked to the data when building and developing Reactions. We’ve found that women rarely get reported and unmatched on our platform compared to men, who are reported and/or unmatched more frequently. Because of this, we wanted everyone to have access to positive Reactions and gave only women access to the more constructive ones."

And if you're part of the LGBTQ community, don't worry — you're not being left out. Users who identify as male or female will have the same reactions, regardless of their discovery preferences (aka who they're interested in). If you identify outside the gender binary, you decide what searches you want to appear in when you sign up for Tinder, and that will determine which Reactions you have at your disposal.

What Can We Do To Eradicate Bad Dating App Behavior?

Ultimately, it will take more than just a virtual eyeroll to change how we treat one another on dating apps. If we really want to see change, we need to start having more open conversations about dating app harassment, and standing up for ourselves with words, not just animations. Still, the fact that a mega-popular app like Tinder is acknowledging the hardships people (and women in particular) face when online dating is an encouraging sign that things can change, as long as we're all willing to put in the effort and call out or report bad behavior online.

"Reactions are a part of our ever-expanding set of tools designed to encourage the right behaviors and discourage the wrong ones," the spokesperson says. "Alongside Reactions, we’re rolling out messaging standards to all users to set the tone and promote best practices for a better Tinder experience. Over the past few months, we’ve also introduced simpler reporting options, including the ability to swipe to unmatch; newly designed community guidelines; and more — all in an effort to promote a positive community and make it easier than ever for our users to take action on Tinder, should they need to."

So if you're a Tinder user and you encounter someone who's being a total jerk, throw a Reaction their way and see how they respond. Even if they DGAF, at least you (virtually) stood up to them — and you can always get your revenge by reporting and unmatching them afterwards.