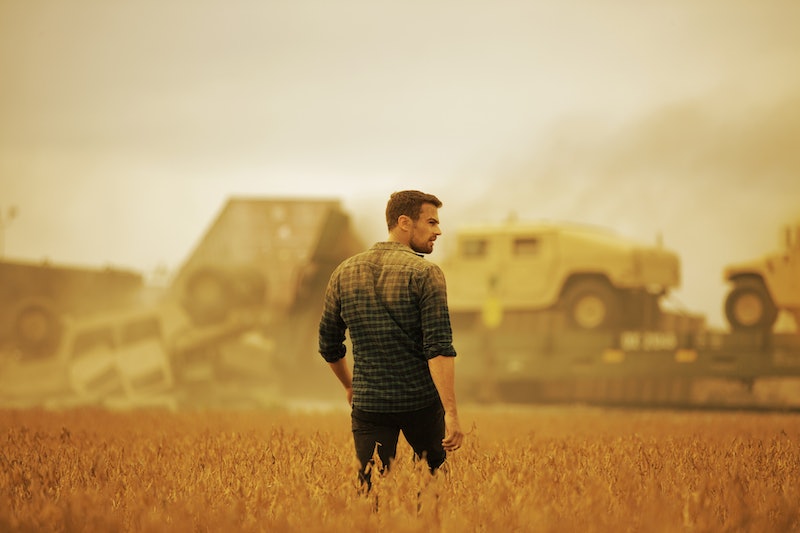 Spoilers ahead. The loss of signal during a FaceTime call is never a welcome occurrence. Shoddy WiFi or inclement weather can all show signs of existence with one dropped connection. And in Netflix's new movie How It Ends, an interrupted call is a sign of an apocalyptic event. The thriller explores the dread that forms after an earthquake-like event occurs on the California coast, followed by a power outage and random eruptions of fire. The only shred of information that the characters, and audiences, have about what might be the cause of this catastrophe is the initial blast on the coast. Beyond that, it's anyone's guess. However, one character's conspiracy theory about what caused the apocalypse in How It Ends is too juicy not to indulge.

One of the trademarks to many disaster movies is the mysterious nature of the events that cause them. Who are the silence-seeking creatures in A Quiet Place? What motivates the heptapods in Arrival? How is a sinkhole swallowing up celebrities in This Is the End? Part of the "fun" of watching civilization claw its way to survival is by working with our heroes to uncover the "why" behind the horror. How It Ends fits into this mold quite nicely by dropping in several terror-inducing symptoms of an apocalypse without diagnosing it.

The only character claiming to have "intel" on the apocalypse is a neighbor of central couple Will (Theo James) and Samantha (Kat Graham), who we don't meet until the final 20 minutes of the film. After Will spends the film fighting to get back to Samantha and their unborn son alongside her father, Tom (Forest Whitaker), the two are finally reunited. However, there is a third wheel in the form of Jeremiah (Mark O'Brien), the neighbor that's watched over Samantha for the past few days. He immediately gives off creepy vibes. (Uttering the lines, "What are neighbors for?" is never a good cinematic omen.)

But Jeremiah becomes infinitely more interesting when talking conspiracy theories over an evening fire in the woods. He explains that he's a software engineer who has seen war game simulations that echo the exact situation the characters find themselves in — from the idea that the earthquake was actually a nuclear bomb to his belief that the apocalypse was "designed to erase irrational behavior with a singular incident." And when he ponders why a seismic event on the coast would cause a power outage everywhere, it makes odd sense. Will is equal parts intrigued and pissed off, having trekked across the country to sit across from a guy who argues that the apocalypse was in any way manmade.

Will points to the ginormous ash clouds over oceans and complete destruction in Seattle as reasons "you can't create what I've seen." But any viewer who's hungry for answers will be pretty tempted to hear some more of Jeremiah's "ideas." To have a name for the thing that has caused such pain (and contributed to the death of Forest Whitaker's character!) is weirdly comforting, if not entirely convincing. Still, the movie never offers an environmental or alien alternative. Even the ambiguous creatures in Arrival had names. How It Ends offers up more questions than answers.

Ultimately there is never a big reveal or news report scene to provide a resolution for the apocalypse or for what happens to Will and Samantha, which makes Jeremiah's weird monologue linger. Conspiracies thrive off of no other reasonable causes. Where are the answers creepy neighbor guy?! After all, the final wall of ash clouds that careen after Will and Samantha come immediately after Will shoots Jeremiah. Just saying.