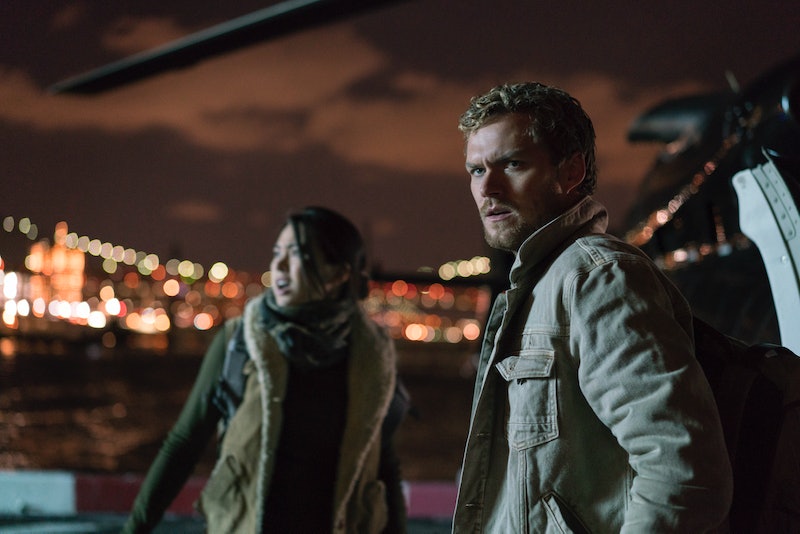 New York City is officially shewk. Spoilers for The Defenders Episodes 1 and 2! At the end of the highly-anticipated Marvel's The Defenders series premiere, the Big Apple is rocked by an earthquake that sends civilians and superheroes alike scrambling for cover. Although the four titular protagonists have yet to meet onscreen at this point, the unusual seismic event ties their disparate storylines together, and most of the second episode is devoted to Matt Murdock, Jessica Jones, Luke Cage, and Danny Rand each investigating the strange goings-on in their beloved city. So what caused the earthquake on The Defenders?

Just in case you thought for a moment that Netflix's Marvel franchise had suddenly turned into The Day After Tomorrow, Episode 2 quickly makes it clear that the tremor wasn't a natural disaster; in fact, there probably wasn't anything very natural about it at all. The audience is told that the epicenter of the tremor was in Hell's Kitchen (aka the headquarters of both Daredevil and Alias Investigations); but that it was strong enough to cause cracks in the ground and toss cars into the air as far as the East River (where Danny and Colleen were arriving back after their trip to K'un-Lun) and Harlem (where Luke had recently returned from a stint in prison).

Jessica's bff Trish Walker receives perhaps the most crucial bit of intel, when a geologist calls into her talk radio show to dispel the notion that this anomalous event was a "shallow" earthquake caused by a fault line under the Hudson. According to the caller, shallow earthquakes can still run up to five miles deep — whereas this disturbance originated less than 300 feet underground.

Given that Sigourney Weaver's villainous character Alexandra was seen watching the effects of the quake from her luxurious rooftop garden, it's safe to say that the premiere's climactic shakedown was a result of whatever nefarious plan she and The Hand have set in motion. Madame Gao later tells Alexandra that her henchmen have found some sort of mystical "wall" (or "door," depending on your point-of-view) blocking their progress towards something. And Jessica stumbles upon an apartment full of explosives, owned by a man who is soon assassinated by Alexandra's personal weapon, Elektra.

So how do all of these pieces fit together? Was the earthquake supernatural in origin, something involving Black Sky and The Hand's plans for world domination? Or is there a more earth-bound explanation for the tremor? The explosives Jessica found were said to be enough to level a whole city block. Assuming that wasn't the sum total of The Hand's explosives, could the quake everyone felt have simply been the result of an underground detonation? Could they be digging another hole under Hell's Kitchen, like the one seen in Daredevil Season 2? Or even expanding that same pit, as massive as it already is?

Surely it's only a matter of time before The Defenders reveals the cause behind the earthquake; and when the mystery is finally solved, it probably won't mean anything good for the show's quarrelsome quartet of heroes.