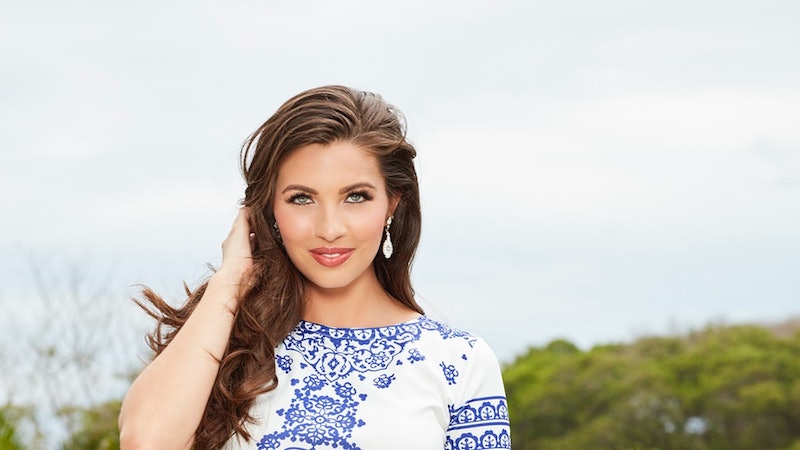 Though Angela and Clay were both on Bachelor in Paradise last season, they ended up falling in love offscreen, and everything seemed great between them... until they called it quits earlier this year. Now, Clay is back in Paradise, and Annaliese — who's close friends with Angela — has made clear she thinks it's too soon for him to be there. But what does Angela think about Bachelor in Paradise? Does she agree with Annaliese? Is she even watching? So far, it seems like she's staying out of the drama. (Bustle reached out to Angela for comment, but did not receive a response before the time of publication).

Though Clay and Angela seemed to be going strong (at least, based on their Instagram accounts), they ended things sometime around April 2019, according to Us Weekly. They haven't been very open about why they broke up, but being that Clay lives in Chicago and Angela lives in South Carolina, it would make sense if the long distance between them had a little something to do with it.

One person who has been outspoken about their split? Annaliese, who seems very angry with Clay about the way things went down. That makes it seem like there's more to the story than what we're seeing, but right now, it's mostly just a he-said, she-said situation. There are three sides to every story, right?

As for Angela, she hasn't yet shared what she thinks about Clay being on Bachelor In Paradise — or really anything about the season at all. In fact, the only allusion she's made to the show has been thanking Annaliese for being a good friend in a recent Instagram post. She didn't mention Paradise specifically, but the post was shared five days ago, just after the two-night Season 6 premiere — and after viewers watched Annaliese standing up for Angela to Clay.

"Ride or die. You're a real one, @annaliesep. The end," she wrote alongside the hashtags #womensupportingwomen and #truefriend.

The fact that Angela has been so quiet about Bachelor In Paradise is a bit out of the ordinary, considering she live-tweeted Hannah B.'s season of The Bachelorette. She hasn't been doing the same for BIP, so maybe she's not watching at all — or maybe, as Annaliese is insinuating, she's still hurt by her breakup with Clay and not too eager to watch him date other women.

But no matter how she feels about the show, it seems like Angela is doing really well these days. She recently launched her own YouTube channel, and as far as her 151K Instagram followers know, she's living her best life while traveling, modeling, and even doing some volunteer work.

Maybe one day we'll have all the answers about how things ended between Angela and Clay, but for now, it seems like they're both happy, so maybe their split was for the best. And in the meantime, it definitely seems like Angela can count on her girl Annaliese to have her back — on camera and off.