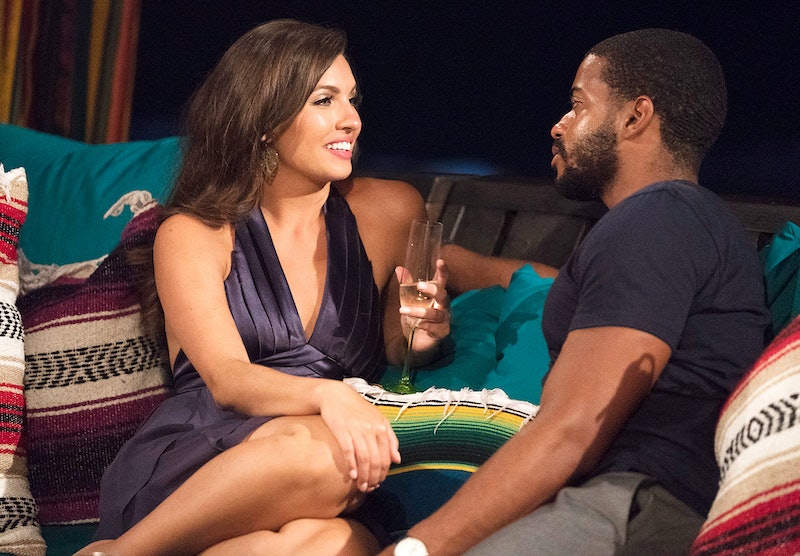 Though we didn't get to see Bachelor/ette alums Angela Amezcua and Clay Harbor's relationship unfold onscreen, we did get to hear a little about it during Monday night's Bachelor In Paradise premiere. Annaliese, who's good friends with Angela, seemed to think Clay still had feelings for his ex. Is it possible, then, that Angela will be on Bachelor in Paradise? Might producers be angling for some kind of rekindling?

Considering her ex is there and she had her heart broken by Eric Bigger during Bachelor In Paradise Season 5 last year, Angela may not exactly be itching to get back down to Mexico. But she is currently single, so hey, maybe she'll give it a second shot!

If Angela does show up, things could get even messier than they already are. In Annaliese's opinion, it's way too soon for Clay to be in Paradise following his recent his breakup with Angela, and she didn't hide her skepticism of the former pro football player. "When he broke up with Angela, he told her he couldn't even imagine looking at another girl. And now he's on a beach where the goal is to get engaged at the end?" Annaelise told the camera incredulously.

If you need a refresher (or just missed it entirely), Angela began dating Clay in September 2018 following her split with Eric on Bachelor In Paradise. According to People, Chris Randone (aka the Goose) introduced them offscreen, and they hit it off. However, Us Weekly reported in April that Clay and Angela had broken up in March after seven months together. According to PopSugar, Season 6 was filmed in June, so that's about three months after their split.

As for what will happen in Paradise, based on the newly released Season 6 tease, it seems like Clay couples up with Nicole from Colton's season. It's definitely possible Angela will join him: the woman frolicking in the water with Mike around the 2:29 mark certainly looks like Angela, but it's admittedly hard to tell. And even if she does show up, it may not be for long: she could just be there for Chris and Krystal's wedding, which was filmed for Bachelor in Paradise Season 6 — she was at their engagement party, after all.

Whether or not Angela goes to Paradise, she seems to be in a good place. When asked how she handles moving on from a relationship during a recent Q&A video on YouTube, she shared, "It's OK if people don't work out, you weren't meant to be." She didn't reference Clay specifically, but her advice highlighted that she's in the right headspace to find a long-lasting relationship. "You need to be happy and content with yourself before you can make somebody else happy. So be proud of who you are and stand by it and the right man is going to love you for you," she said.

If Angela gives Paradise another chance, it will shows she's not giving up on reality TV love after a couple of heartbreaks. If she doesn't, well, maybe she's just decided she's better off looking for someone in the real world.