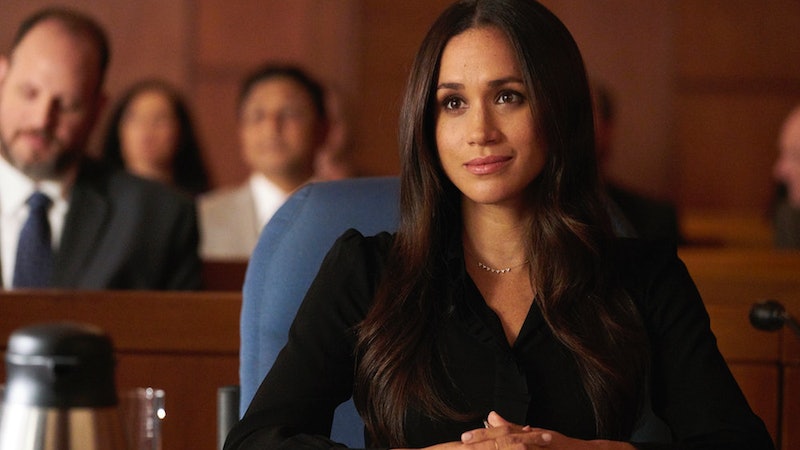 Before she met Prince Harry, the Duchess of Sussex was part of yet another fairy tale romance, thanks to her breakout role on the television show Suits. But while her royal obligations might keep her from appearing on the show's upcoming final season, Patrick J. Adams revealed how Suits will handle Meghan Markle's absence when the show returns for Season 9.

Before she and Adams left the show in Season 7, Markle played fan favorite paralegal Rachel Zane for almost a decade. And while her and Adams' characters ran off into the sunset — or, well, off to Seattle — after tying the knot in the Season 7 finale, Mike is set to return to Suits and the recently christened Zane Specter Litt Wheeler Williams to help wrap up the beloved show without his longtime love. "[They're] happy. I promise you, they're happy," Adams told Entertainment Tonight about the status of Rachel and Mike's relationship heading into the final installment.

Still, the actor explained that, "for Mike, this is just a trip to New York," adding that his character will appear at his old law firm in order to "come and see friends," rather than to make a proper return. "He’s in Seattle, [Mike and Rachel] are building their life together, it sounds like he’s doing well."

“It seems to me like Mike’s in a great place. Whatever is happening in Seattle is really good,” Adams continued. But while Markle might not physically appear on the show, there are still plenty of references to Rachel in the upcoming episodes. "There’s phone calls with Rachel saying, ‘Goodbye, I love you,’ and, you know, I think there’s some obvious acknowledgment that she’s still there and a part of the show," he explained.

In addition to giving up her acting career in order to become the Duchess of Sussex, Markle might find it difficult to clear time in her schedule to return to the show after welcoming son Archie Harrison back in May. "We’re all grown-ups," Adams — who welcomed a daughter with Troian Bellisario in November — told ET about the way things have changed for the on-screen couple since leaving the show.

"It’s weird. We all have kids now … It’s fantastic. I mean, it just changes everything in your life. It gives you a new purpose," he said. "I wish Meghan all the best," Adams said, adding, "I’m really happy for them."

While Adams joked back in April 2018 that Markle's new life and title means, "I don’t even have her telephone number anymore!" the pair have remained close friends, with Adams attending the royal wedding. The actor even shared a particularly sweet and gushing message of congratulations when Markle's engagement to Prince Harry was announced in November 2017. "Playing Meghan’s television partner for the better part of a decade uniquely qualifies me to say this: Your Royal Highness, you are a lucky man," Adams wrote on Twitter at the time. "I know your long life together will be joyful, productive and hilarious. Meghan, so happy for you, friend. Much love."

Clearly, the love between Adams and Markle — not to mention Rachel and Mike — is still stronger than ever, and no amount of royal titles or time spent in Seattle will ever tear these two apart.