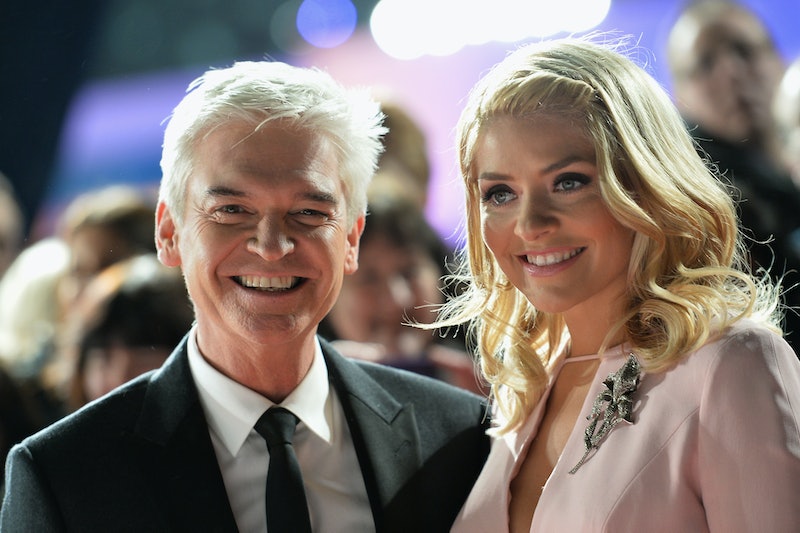 These two have endured awkward encounters, horrible guests, hangovers, and enough laughing fits to power a small island. But now that his best bud, Holly Willoughby, is on the other side of the world, presenting I'm A Celeb in Ant McPartlin's place, I imagine Phillip Schofield is wishing he could be with her. Sure, it's been a little jarring seeing Ant without Dec, but Willoughby's been an almost seamless replacement. Her debut on I'm A Celeb couldn't have gone any better. The presenter must be feeling pretty proud, as Scofield's reaction to Holly Willoughby on I'm A Celeb was just too adorable.

Schofield first reacted to the news of his former This Morning cohost replacing Donnelly back in August. Ever the teasing friend, Schofield threw a little shade Willoughby's way on his Snapchat, which, by the way, if you're not already following, is an absolute goldmine. As The Liverpool Post originally reported, he snapped himself mid-giggle, with the text: "Holly in a jungle...where everything will scare her sh****ss literally can't wait."

He was probably referring back to the official statement Willoughby made, when she first confirmed she'd be Dec's replacement in the jungle back in August. as we reported. "Honestly, I'm a huge fan of I'm a Celebrity and actually feel like I've won a competition to go and hang out on my favourite show! When is it a good time to tell Dec I'm scared of everything that moves?!" she said.

But as she made her debut on the show on Nov. 18, Schofield made his real feelings known. As the show drew in its biggest ratings in five years, according to Digital Spy, Schofield couldn't help but gush about how proud he was of his friend the next morning. "Didn't she do well," Willoughby's This Morning replacement and former member of The Saturdays, Rochelle Humes, reportedly exclaimed on the show.

Schofield thought all those viewers were down to his friend. "Eleven million viewers tuned in last night, a 51 per cent share, the highest figures in five years. The power of Holly Willoughby and This Morning, eh?" But he's missing her a lot too, The Mirror reports. He'd allegedly been messaging her throughout the weekend leading up to her first jungle appearance. "I left champagne in her dressing room, which obviously helped," he said.

Right before the opening episode of I'm A Celeb aired, Schofield tweeted in anticipation, writing: "So SO excited ... have a great series guys @hollywills@antanddec@imacelebrity .... 1 hour to go." He also posted the opening shots of his best pal on his Instagram, as he captured Willoughby telling Donnelly she felt as "Ready as I'll ever be," to which Schofield wrote: "Here we go.... good luck @hollywilloughby@antanddecofficial."

The video received plenty of love for Willoughby, with one user commenting: "I thought she did amazing she’s bound to be nervous stepping into Ants shoes but she did fab can’t wait for tonight! Xx," and neither can Schofield, I imagine. After the episode aired, a user tweeted: "holly is amazing you must be very proud," to which he replied, "so proud." N'awww.