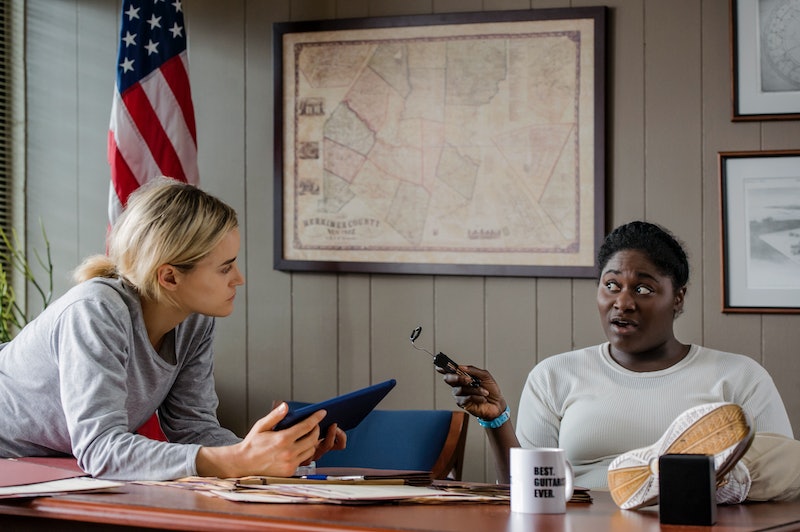 Orange Is The New Black is back, and while the inmates are at Litchfield Max now, their actions at the previous "camp" weigh heavily over the new season. What happened in Orange Is The New Black Season 5? The authorities are trying to work out the details of the riot in Season 6, so let's refresh in the name of keeping up.

The Litchfield riot technically started at the end of Season 4, when Taystee (also known as Tasha) started a protest after Poussey Washington was killed during a protest about prison conditions. Daya, who had a gun that C.O. Humphrey snuck in, shot him with it— and then the gun hops from inmate to inmate for the duration of the season. Meanwhile, Linda from purchasing disguised herself as an inmate after being momentarily held hostage and Daya's mother Aleida, who was released before Poussey died, is still trying to get her kids out of foster care and find sustainable work.

Some of the inmates, including Piper, Suzanne, and Brook, usde this chaotic time to properly mourn Poussey in their own ways. And not everything was very dark. For example, Piper and Alex got engaged, Morello found out that she's pregnant, and there was even a brief period where everyone got way into a coffee bar. Those were some minor things, but these are the other highlights that will have some effect on Season 6 and the inmates' respective futures.

At the beginning of the riot, Taystee forced Caputo to record a statement telling the truth about Poussey's death and leaked it on social media. She then organized a list of demands from her fellow inmates. They included reinstating the GED program, the arrest of Poussey's killer, better healthcare, free tampons, better jobs, conjugal visits, amnesty for those involved in the riot and, in the spirit of true democracy, some less serious requests like flaming hot Cheetos and Takis. Can you believe that it's only the last one that arrives at Litchfield? Well, the tampons too, but it is essentially an empty gesture.

Judy King, who was set to be released when the riot begins, is freed by the other inmates so that she can give a statement to the press — but Taystee addresses them instead. Then they burn the Cheetos as a form of demonstration. Taystee also negotiates with Figueroa for twelve hours and truly holds her own as an advocate. When we find her in Season 6, Taystee is paying for all of this.

One of the joys (and occasional horrors) of Season 5 was seeing the power dynamic flip between the corrections officers and the inmates. Funny, for a little bit at least. The inmates forced the guards to strip down, denied them bathroom privileges, made them do a talent show, and locked them in porta-potties. In Season 6, viewers will get to see most of the guards process their time as hostages and even suffer from forms of PTSD.

Both Gloria and Ruiz attempted to strike deals with the guards and let them go in exchange for favors, but neither of them worked out. Those failed deals set the two women up for a rivalry in early Season 6.

At the end of the season, Tiffany actually escapes with two of the guards, one of whom is Charlie Coates, the guard who she had sex with on her van runs and is now in a relationship with. Because Linda from purchasing is disguised as an inmate, Tiffany gets away undetected in the final headcount.

Everything Goes Down In The Pool

Throughout the season, Red and the other inmates do some detective work and find out that Piscatella was transferred from the men's maximum security prison after he killed an inmate while on duty. She and some of the others lure him into the prison, but he attacks and tortures them. Season 4 established that he was unstable, if not downright evil, and here he cuts off Red's hair in an excruciating scene and breaks Alex's arm.

Thanks to Frieda, who is revealed to be an expert survivalist and has a secret bunker stacked with food and a computer in an abandoned basement pool, Piscatella is knocked out by a poison dart and brought downstairs. In the final episode, Taystee has the opportunity to kill him as some kind of justice for Poussey, but doesn't. She gives the gun to Cindy and Red tells Piscatella to leave. He does.

Taystee, Cindy, Nicky, Suzanne, Piper, Alex, Red, Gloria, Blanca, and Frieda remain in the pool, waiting for CERT officers to find them when they storm the prison to end the riot. Unbeknownst to them, Piscatella is accidentally shot dead by the officers raiding the place. Later, it looks like all of the prisoners are rounded up and taken to another prison, which is where viewers find them in Season 6.

Feel all caught up? Good. Because this season is another wild ride, and the nitty gritty details of the riot will definitely come up again.