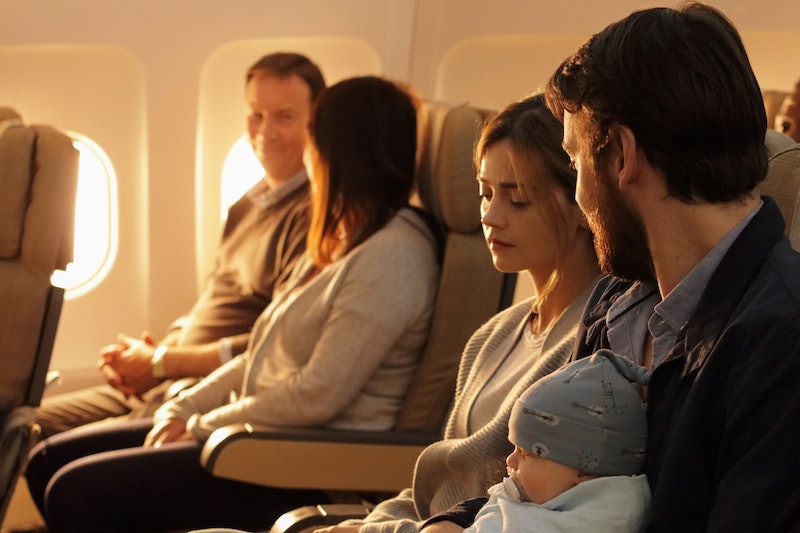 The BBC's latest drama series The Cry kicked off last Sunday, and has already generated a lot of buzz after hooking viewers with its mysterious plot. The series focuses on the strained marriage of Joanna (Jenna Coleman) and Alistair (Ewen Leslie) after they jet to Australia so that he can fight his ex-wife Alexandra (Asher Keddie) for custody of their daughter. However, the couple's lives turn into living hells when their baby Noah suddenly goes missing. But what really happened to baby Noah in The Cry? Is all as it seems?

Before you continue, please be aware that some seriously big spoilers are coming your way — you have been warned.

OK, well, although BBC bosses are always super secretive when it comes to giving away spoilers, fans desperate to know what happened to little Noah can get a good indication from Helen FitzGerald's book The Cry. The TV series is based on the novel, and so far, it's followed the book pretty accurately. So my guess is that the TV show is going to end in exactly the same way, and let me tell you, it is grim AF. Whatever theories you may have been coming up with in your head, the actual truth about baby Noah is ten times sadder.

The first episode concluded immediately after little Noah had supposedly been kidnapped from the back seat of his parents' car after they forgot to unlock it while popping into a convenience store. Viewers watched on in horror as Alistair and Joanna desperately screamed for help. What followed next was a nationwide police search, with detectives trying to figure out who could have possibly taken the little boy.

In the FitzGerald novel, the mystery which surrounds the disappearance of baby Noah dominates the narrative, and after a major search for the missing child, which includes an inquest and viral media storm, the fate of the newborn is eventually revealed. At the very end of the book, readers learn that the supposedly abducted baby was in fact killed by father Alistair after he gave little Noah an accidental overdose of medicine.

Alistair then convinces Joanna to cover up the death as a kidnapping, which is where the story first began. However, it's worth pointing out that the television adaptation won't necessarily follow the same route, but due to the similarities between the two so far, it looks likely that baby Noah will suffer the same fate on screen.

The gripping first episode of The Cry turned out to be a ratings hit for BBC One, and drew in a peak audience of 6.3 million viewers, according to the Evening Express, and TV critics seem to share the audience enthusiasm. One review from The Times applauded Coleman's "superb" performance, and noted that the drama is "exquisitely done."

Of course, whichever route the BBC adaptation decides to take with this intriguing, yet heartbreaking story, I'm sure viewers are going to be hooked right until the very end. Bring on episode two.