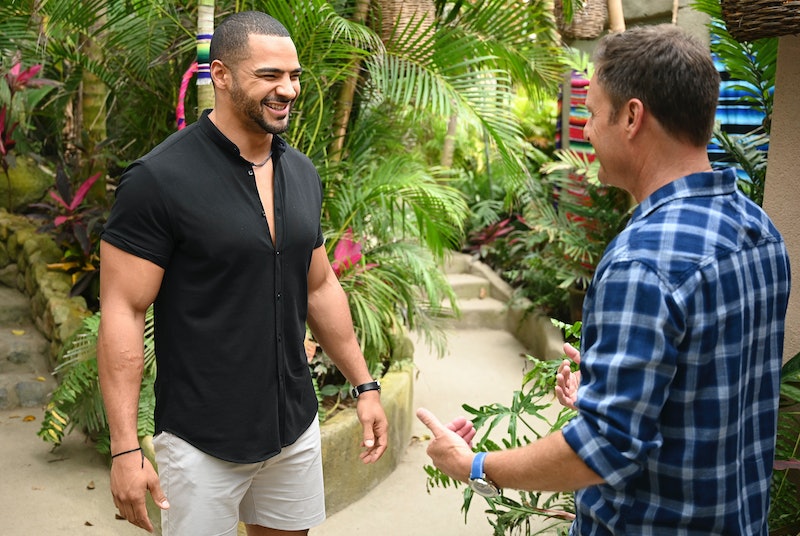 There are a lot of random job descriptions on The Bachelor and The Bachelorette — think chicken lover, dolphin enthusiast, among others — but Clay Harbor had a real-life, highly public job. A football player, Clay was on a break from playing in the NFL due to a football injury. Naturally, this led to him auditioning for The Bachelorette, as one does. Clay's time on Becca's season of The Bachelorette ended up being pretty ironic, considering his job and passions.

You probably remember that Clay didn't last that long on The Bachelorette and he was the casualty of what was a pretty eventful week for Becca. First, David went to the hospital because he fell out of a bunk bed and hit his face on the floor, causing him to be rushed to the hospital. It was the episode with the football date, which Clay was super jazzed about, considering he was a professional tight end for teams like the Philadelphia Eagles, the Jacksonville Jaguars, the Detroit Lions, and more. Actually, the date didn't seem that fair if Clay was going to play. It was really his time to shine.

Except Clay really leveled the playing field, because he took a tumble in a tackle and ended up severely damaging his wrist — so much so that he needed to get surgery and go to physical therapy. Ironic? Yes. But it really could have happened to anyone.

Clay could have opted to stay on the show and wait for surgery, but considering that he is a professional athlete, attempting to court Becca on national television just took a backseat. Sure, reality TV is fun and all, but risking a career (and a limb) just isn't worth it.

Staying on The Bachelorette for just a small chance at winning Becca's heart is certainly not as important as playing the game he loves and continuing his career, so it's understandable as to why he wanted to leave the show and get the surgery.

He wasn't really a frontrunner anyway, so it was probably for the best. Clay went on Twitter after his surgery to thank everyone for their support.

Later, Clay tweeted that he was ready to get back on the field, thanks to his surgery, and he was waiting to get picked up by a new team. Currently, Clay is a free agent and not affiliated with any team, so he has the flexibility to take time off and film a couple weeks of BiP.

Following The Bachelorette, Clay quietly dated Bachelor Nation member Angela Amezcua for a few months in 2018, but they have since split up. Who know who he will couple up with down in Mexico. The second time might be the charm. But the producers should probably go easy on him while planning the one-on-one dates — no one wants Clay to get injured again and have to ditch the competition early. He deserves a solid shot at finding a partner in Bachelor Nation just like everyone else. .