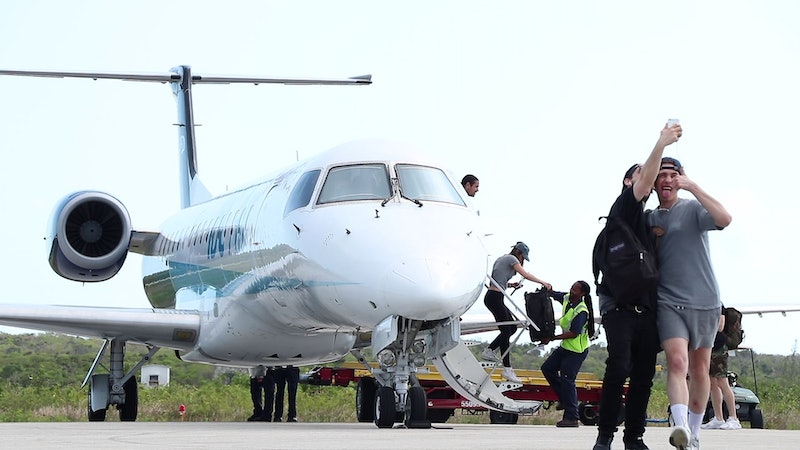 Out Jan. 18, the Netflix documentary FYRE: The Greatest Party That Never Happened and Hulu's Fyre Fraud (streaming now), give a behind the scenes look at what went wrong with 2017's infamous Fyre Festival. The canceled Bahamian music festival promised super models, luxury accommodations, and big acts, but attendees arrived to find a dirty tent city filled with soaked mattresses and little in the way of food. The festival's founder and CEO, Billy McFarland, was sentenced to six years in prison for fraud related to the festival, but he's not the only one involved who is having to face the music. One of the other decision-makers was a man named Grant Margolin, who served as Fyre Media's chief marketing officer, shown influencing the proceedings in both docs. So what happened to Grant Margolin after Fyre Fest?

Per Courthouse News, in July of last year, the United States Securities and Exchanges Commission (SEC) filed fraud-related charges against Margolin, McFarland, Fyre Media, McFarland's faux credit card company Magnises, and Daniel Simon, a longtime friend of McFarland's who was involved in all of his companies. These charges were separate from the criminal wire fraud charges to which McFarland pleaded guilty and for which he was sentenced to prison, but they still carried a hefty punishment.

Margolin agreed to the settlement offered by the SEC without admitting or denying the charges, according to Variety. He was mandated to pay a $35,000 penalty and is barred from serving as a director or officer of a public company for seven years. Compared to the six-year prison sentence his former boss received in the prior criminal case, it would appear that Margolin got off with a slap on the wrist, especially considering how heavily the SEC alleges he was involved in Fyre Festival's fraudulent activities, per NPR. "Margolin and Simon created certain documents at McFarland's behest that inflated operational and financial metrics of Fyre Media and Fyre Festival, without inquiring into the accuracy of information ... or exercising the care and skill that a reasonable person of ordinary prudence and intelligence would be expected to exercise under the circumstances," the SEC wrote in its assessment of Margolin. But just because Margolin agreed with the SEC's settlement doesn't mean he's out of the woods yet.

There appear to be at least two active lawsuits against Margolin that are related to his involvement with Fyre Festival. One is a class action lawsuit, brought about by festival attendees in May, 2017 against Margolin, McFarland, Fyre Media, and Fyre Festival co-founder Ja Rule, according to the same NPR article. The other is a separate class action suit filed solely against Margolin, according to TMZ. This suit, filed in October of last year, accuses Margolin of purposely deleting social media comments that were critical of the festival in an attempt to lure prospective concertgoers into buying tickets.

Grant Margolin has kept a very low profile since the Fyre Festival debacle, and it's easy to see why. The former marketing executive continues to be in a lot of legal hot water stemming from his involvement with the festival, and these two new documentaries will only bring more attention to those troubles.