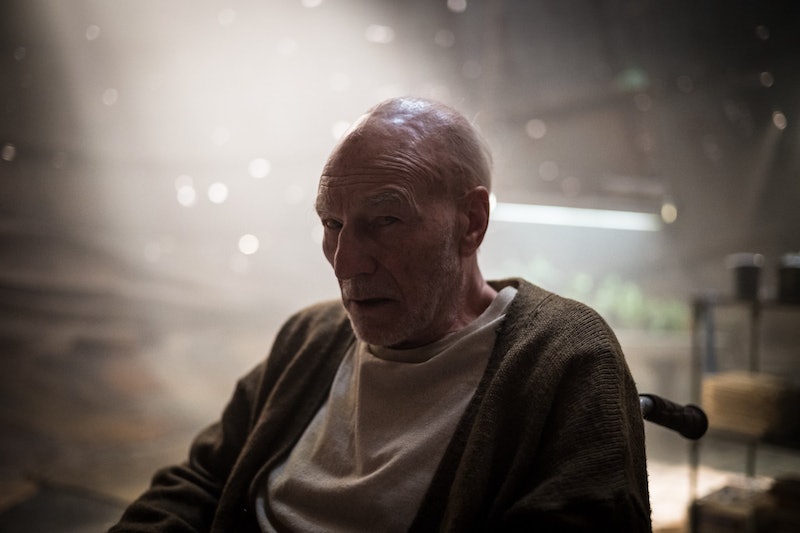 As you've no doubt heard by now, Logan will feature the last-ever performance by Hugh Jackman as Wolverine. But he's not the only X-Man hanging up his costume after the film. Patrick Stewart has also announced he'll be leaving the role of Professor X behind after Logan, and it seems like he's getting out just in time, because the character is seriously struggling in the new film. But what happened to Professor X in Logan?

The movie is in part based on the comic book storyline Old Man Logan, which takes place in an alternate future where an older Wolverine — who's basically invincible — navigates his way through a dystopian America that is now ruled by supervillains. The original comic heavily features lots of characters whose rights are owned by Marvel and not Fox, like Hawkeye and Hulk, so the film changes the story considerably. The biggest addition is that of a now very elderly Charles Xavier, but this isn't the character fans know and love. Because of his age, Professor X's brain is deteriorating. He has memory lapses and suffers from seizures, but most frightening of all is the effect his condition has on his vast mental abilities.

The movie basically explores the idea of what would happen if the world's most dangerous weapon, Professor X's brain, started going haywire. And it certainly has some devastating effects. In the comic Old Man Logan, a past event is revealed wherein Wolverine was tricked into killing his fellow X-Men by the villain Mysterio, who made him think his teammates were villains invading the X-Mansion to kill the children. The movie features a similar tragic past event, but it's not Wolverine who kills the X-Men; it's Professor X. Spoilers ahead!

Known as the "Westchester Incident" in the film, details are sparingly shared about how Professor X, during one of his mental breakdown episodes, inadvertently killed and injured a number of X-Men and students at the X-Mansion. This event destroyed the X-Men, but Professor X can't even remember having done it most of the time due to his condition.