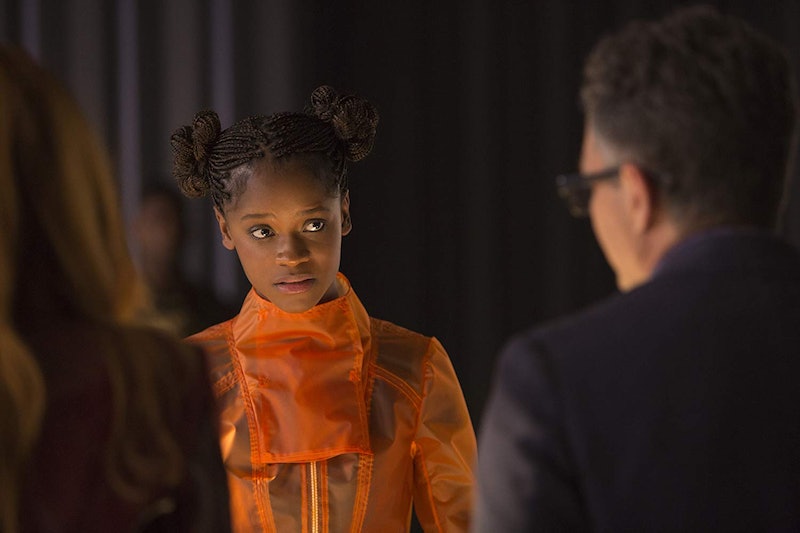 With all the chaos that ensued and the superheroes we had to keep tabs on in Avengers: Infinity War, it was easy to lose track of a few — especially when the movie itself didn't spell out their fates for us. So what actually happened to Shuri in Infinity War? The princess of Wakanda (Leititia Wright) is one of the characters fans were left worrying about, even after the credits rolled.

Last we saw Shuri, she was in the process of extracting the Mind Stone from Vision's (Paul Bettany) forehead, and performing her technological magic to have the hero live without needing the stone. And though she knew exactly what she had to do, and was this close to finishing the operation, she didn't have enough time before members of the Black Order broke into her lab to try and obtain the Mind Stone. When Thanos's allies attacked, she was knocked down deeper into her lab, and we never see her again through the course of the film.

Many fans were hoping that their favorite Disney/Marvel princess survived the snap, but unfortunately Marvel has (albeit non-verbally) confirmed that that's just not the case. The first indication of that was in Avengers: Endgame's first trailer.

While the remaining Avengers meet up and discuss their plans moving forward in their second attempt to defeat the Mad Titan Thanos, the holographic projection behind Bruce Banner (Mark Ruffalo) labels Shuri as one of the "missing." So you could have assumed that she was probably dusted, just like half of the entire universe. But Scott Lang/Ant-Man is also counted in that category (Paul Rudd), so hope still remained that Shuri was just missing in action, and not totally gone gone.

Even actor Angela Bassett, who plays Queen Ramonda (King T'Challa and Shuri's mother), suggested that she and her daughter survived Infinity War. In an interview with Screen Rant last year, she denied that her character died in the fourth Avengers movie. She also said, "Neither did my daughter. Shuri, she's a bright girl there in Wakanda. So…"

However, the release of the individual character Endgame posters in March brought some bad news: Shuri's is in black-and-white, which insinuates that she's actually bitten the dust — or, well, literally turned into dust. Of course, this confirmation of her fate understandably upset many fans.

But, fret not Shuri stans, because we honestly won't know what happened to our fave Wakandan genius until Endgame reveals it. As Cinema Blend points out, the brother duo directing the film Joe and Anthony Russo, have admitted to doctoring some of their marketing materials so that when audiences watch the movie there's still going to be a lot of shock value.

"The thing that’s most important to us is that we preserve the surprise of the narrative," Joe Russo told Empire Magazine, per Cinema Blend. "When I was a kid and saw The Empire Strikes Back at 11am on the day it opened… It so profoundly moved me because I didn’t know a damn thing about the story I was going to watch. We’re trying to replicate that experience."

For now, it certainly seems as though Shuri has been wiped out. Still, there's no harm in holding onto the hope that she somehow made it out of Infinity War alive.