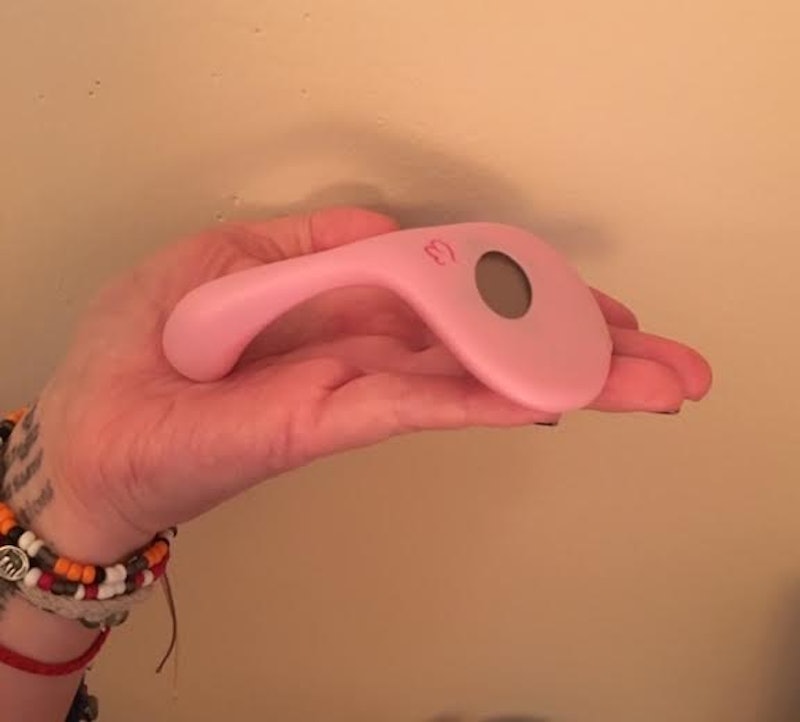 If someone asked you right now, "What's the best way to wake up in the morning?" could you give them an immediate answer, without even taking a second to think about it? I know I could and it's one word: orgasm. Starting your day with an orgasm is exactly what some of us need. The effect that it has on our brain, and that beautiful glow it gives, is enough to make it part of your morning routine. At least that's what the creators of Little Rooster thought when they created a sex toy that doubles as an alarm.

"As you orgasm, your body releases a hormonal cocktail of dopamine, epinephrine, serotonin, oxytocin, and DHEA (dehydroepiandrosterone) that enhances mood, boosts immunity, and is a natural anxiety reducer and pain reliever," sex therapist Stefani Threadgill tells Bustle. "Orgasm strengthens your pelvic floor muscles (thanks to vaginal contractions) and the effect is often pleasure, a warm, relaxed state of mind and a sexy glow (due to the DHEA).

"Beginning the day with an orgasm is not only a positive way to start the day for your body and mind, but for your relationship too," Threadgill says. "What you think about grows. Orgasm, from solo or partnered sex, often leaves you thinking more about sex, which can enhance your sex drive and sex life overall. And it beats waking up to an alarm clock!"

So, with that in mind, I had to do what I knew was the right thing: try Little Rooster for a work week. Here's how it went.

I opened up my Little Rooster. It was much smaller than I thought it would be. It's not as though I thought it was going to be gigantic or anything, but in length it wasn't much longer than a tube of lipstick. It was also really light, which is great since I knew I'd be wearing it in my underwear and no one wants to feel like they've taken a crap in their underwear while sleeping.

Although the picture was quite clear as to how to wear it (see below), what threw me for a loop was trying to set the time and the alarm. It took me well over an hour to get any sort of time on it, and the only reason I got even any time on it at all was because I started pounding away on the two buttons at once like a child trying to figure out a remote control. I then proceeded to do the same thing when trying to set the alarm. When I got it to 6 a.m., although I have no idea how, I just left it. I figured, I'd just get up early, have an orgasm, then go back to bed for a few hours.

There was no orgasm. But this was my fault. I don't usually wear underwear to bed, something my gynecologist recommended years ago (your vagina needs to breathe, people!), so I chose to wear a snug pair of yoga pants to keep it in place. No such luck with that. I'm that person who wakes up with my sheets upside down, my mattress hanging six inches off one side (always the right side), and my duvet up around my head. So, it should have come as no surprise that when I awoke to vibrations, it was on my lower stomach and not where it was supposed to be: on my clitoris. Despite the shape of the toy, it managed to move out of place and vibrate where I really didn't need it to vibrate.

For the first time, in a long time, I decided to wear underwear to bed. Which, honestly, feels weird when you've been underwear-less for so long. I also tried, yet again, to set the clock and the alarm. This time, through nothing but a sheer miracle, combined with screaming and wildly shaking Little Rooster in the air, it managed to get fairly close to the real time — about 20 minutes off, but I figured it was close enough. I slipped it into my underwear, set a random alarm time, and hoped for the best.

I awoke to vibrations against my pubic bone that resonated toward my clitoris. It was a gradual vibration and definitely a far more soothing wake-up call than my phone's alarm clock. Although I didn't automatically orgasm, even as the vibrations intensified, I laid on my side and did a bit of finagling, pushing my clitoris closer to the part that was vibrating the most intensely. I still didn't orgasm, but it felt really nice to just lay there with it vibrating between my legs. (Full disclosure: My depression has been really bad lately and because of it, climaxing has been a struggle, so I don't blame Little Rooster.)

Realizing that I was dealing with the wiring in my head that was definitely interfering with my ability to orgasm as I usually do, I decided I'd try Little Rooster during a nap. I still hadn't figured out the whole time and alarm thing, but messed around (yet again) with the buttons and was able to set up about a two-hour long nap. Since I haven't been able to sleep at night, I was out cold in minutes.

When I awoke to the vibrations a couple hours later, I did as I did the day before: leaned into Little Rooster, pushing my clitoris up against it as much as I could. It was about 8 p.m. and I didn't have anything to do, so I just laid there enjoying the vibrations, trying to think of some of the raunchiest sexual scenarios as possible to give any incoming orgasm a little push. But nothing.

So I decided to take matters into my own hands. I removed Little Rooster, put it directly against my clitoris, and had an orgasm about a half hour later — which, again, is very much unlike me. But my depression is taking a toll on lots of things lately.

I figured I'd give Little Rooster one more try. Still, the clock and alarm weren't properly set, but as someone who can barely follow Ikea instructions, I shouldn't have been surprised. Again, the following morning, I awoke to gentle vibrations that increased and it felt great. Again, there was no orgasm until I removed it and put it directly against my clitoris. But, as two past boyfriends have pointed out to me — although I didn't care or need to know — I require a lot more "vigor" on my clitoris than other women they'd been with, so that could definitely be a factor in all this.

Honestly, Little Rooster is awesome. Despite the fact that I still can't figure out how to set the time and alarm, and had to wing it, I do feel that for some women it's the perfect wake-up call. Personally, I thoroughly enjoyed waking up to vibrations instead of the "The Imperial March" at full volume from my phone. Simply, Little Rooster isn't a fit for me, but for women who don't need much clitoral stimulation, I imagine it will be a magical experience. So if you're one of those people, I highly recommend it.