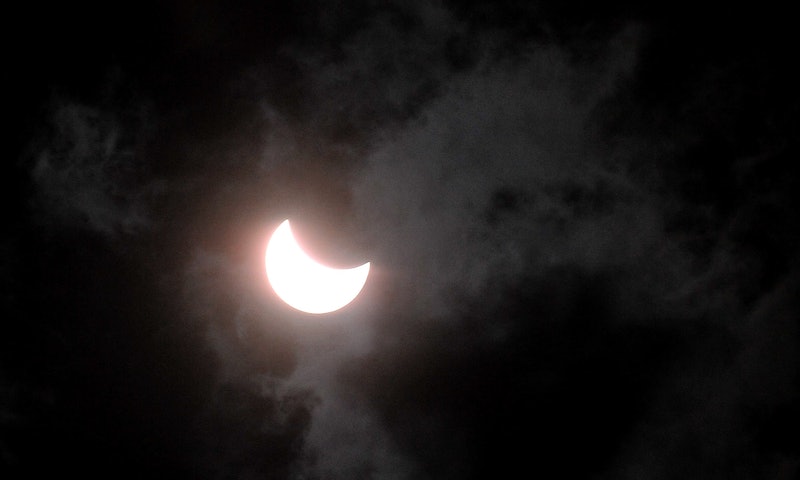 If it seems like people are making a Big Deal out of Monday's solar eclipse, that's because Monday's solar eclipse is a big deal. For the first time in nearly 100 years, people from coast-to-coast across America will be able to witness the eclipse's path of totality, and depending on where in the country you live, that promises to be quite the show. But, uh, what happens if it's cloudy during the solar eclipse? Will you still be able to see it? Or will you be forced to tell your grandkids that 2017 was such a garbage year that the universe decided we Earthling mortals didn't deserve to see this celestial tete-a-tete so it canceled it for everybody? Hopefully, it won't be as bad as that.

Obviously, clouds can affect visibility. During especially hot days, this is usually considered a welcome reprieve, but on Monday, you're going to want the skies to be as clear as possible so that you can watch (safely, with protective glasses) as the moon passes over the sun. Cloud-free skies are going to be especially important if you're hoping to get a glimpse of the sun's gossamer corona, which is the creepy-but-awesome glowing ring that appears to outline the moon right at totality. You know, this thing:

But, even if it does happen to be overcast on Monday, don't give up hope. As the American Astronomical Society points out, you will still be able to experience the effects of the solar eclipse, even if you can't see all of it. According to the AAS:

"Without doubt, the highlight of any solar eclipse is the gossamer corona, which is visible only if the sky is relatively clear and transparent. But many of the other phenomena described above can be experienced even if clouds cover the Sun. For example, it will get dark, the temperature will go down, any wildlife in the area will exhibit changes in behavior, and your fellow eclipse watchers will make sounds — though perhaps not happy ones."

Regardless of what the clouds are up to or where you are in relation to the path of totality, the solar eclipse is going to lead to some eerie Monday afternoon darkness. People living in states where totality is at its peak — like Oregon, Idaho, Montana, Wyoming, Nebraska, Kansas Iowa, Missouri, Illinois, Kentucky, Tennessee, Georgia, North Carolina, and South Carolina — can expect almost night-time like conditions as the moon blocks out the sun. Temperature change will definitely be noticeable too. If you're in the path of totality, the weather could cool down by as much as five degrees Fahrenheit. So, while you might not be able to see the full eclipse if it's cloudy, your other senses will definitely be on high alert.

Right now, weather forecasters are predicting some clouds, especially toward the middle of the country in states like Nebraska, but really only time will tell what the weather decides to do. If you're freaking out, Business Insider published this map that shows what parts of the country are most likely to be overcast come Monday.

And please, if it is cloudy during the solar eclipse, don't assume it's safe to look up at the sun without protective eye gear. You are still in extreme danger of damaging your eyes if you look at the eclipse without special verified solar eclipse glasses that meet international safety standards, so don't even think about risking it. You know how you can still get a sunburn even when it's hazy out? This is sort of the same deal — only you're scorching your retinas. There's another total solar eclipse happening in the U.S. in 2024, and you're going to want full vision to see that one, too.