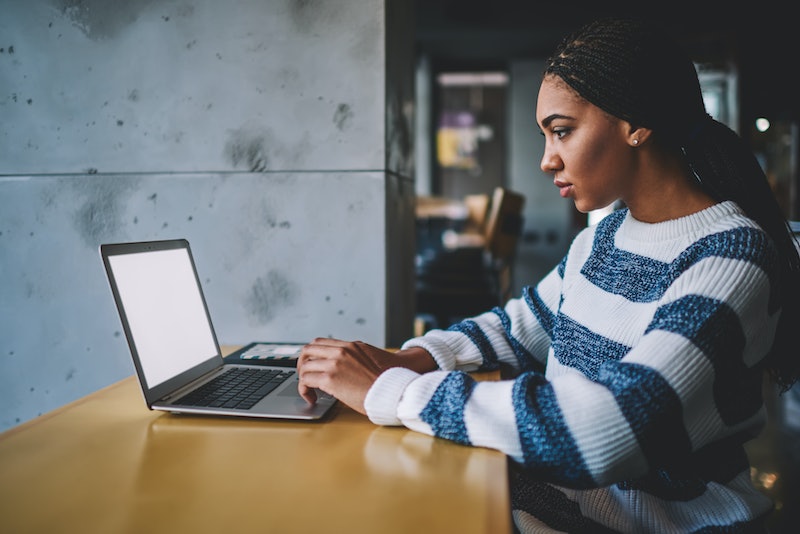 If you were to lift up the keys of your keyboard, and take a peek underneath, you'd probably be met with a grisly scene. "We clean our homes but most of us never think to clean our keyboards," Rebecca Park, a registered nurse and founder of RemediesForMe.com, tells Bustle. So if it's been a minute since you gave yours a once over, there's likely all sorts of crumbs and dust accumulated there, as well as dirt and germs.

"Our keyboards can actually harbor high levels of bacteria," Park says. "The most common bacteria that are found on our keyboards tend to live on our skin, mouth, and nose. These are then transferred to our keyboards, usually by our hands." And according to one study, this is more likely when multiple people use the same keyboard, and each bring their own germs to the table.

Another study even found two drug-resistant bacteria called Enterococcus faecium (VRE) and Staphylococcus aureus (MRSA) lurking on these surfaces, Park says. "These bacteria could survive up to 24 hours on keyboards," she says. It's gross, but it doesn't necessarily mean you have to toss yours and start over. "There are bacteria everywhere, all around us, but most of them will not get you sick," Park says.

That said, touching bacteria-riddled surfaces all day long, and then touching your face, can impact your skin. "Dirty electronic devices are a frequent cause of more acne breakouts, AKA 'technology acne,'" Dr. Yoram Harth, a board-certified dermatologist and medical director of MDacne, tells Bustle. "Bacteria that are on your keyboard or phone can exacerbate acne and rosacea as well as cause skin infections like impetigo."

In another study, researchers collected samples from 300 keyboards and found that all of them had bacteria, including E. coli. "The authors concluded that the presence of pathogenic bacteria on these objects indicates that they might be a cause for the transmission of skin infections," Harth says. "Similar overloads of bacteria were also found on smartphone touch screens and computer mice and headphones. Rubbing the skin or picking on it immediately after touching these bacteria loaded keyboards or smartphones will spread the bacteria to [the] skin and frequently cause more acne breakouts."

Again, it's not something you necessarily have to think too much about, but it never hurts to be aware of germ-y surfaces, and take a few extra precautions. "A good way to prevent transmission of infection from your keyboards is to wash your hands before and after using the computer," Park says. "Soap and water is effective enough to kill most bacteria."

Do this, an you won't be transferring as many germs to your keyboard, and then back to your face, and vice versa. It can also ensure you won't be clogging your keys with crumbs from food, especially if you get right back to typing after eating lunch.

If you want to give it thorough cleaning, you can do that, too. Just shut off your computer, Park says, and then turn the keyboard upside down while gently tapping it over a trash can, which will help "get rid of the debris trapped in between the keys," she says. "You can also do this with a can of compressed air."

From there, clean on and around the keys with a cotton swab that's been dampened with isopropyl alcohol, she says, in order to get rid of grime and kill germs. Then, "use a dampened lint-free cleaning cloth with a cleaner to wipe down the rest of the keyboard," Park says. You won't want to get anything wet, but a quick wipe should do the trick. And just like that, you'll have a much cleaner keyboard.

More like this
Ashamed Of Your Screen Time Stats? Here's How To Change That
By Alexis Morillo
How To Turn Off TikTok Profile Views So You Can Stalk Other Accounts In Secret
By Alexis Morillo
This Wordle Rival Is Taking Social Media By Storm
By Sam Ramsden
How To Hide Cords Under A Desk
By Jenny White
Get Even More From Bustle — Sign Up For The Newsletter
From hair trends to relationship advice, our daily newsletter has everything you need to sound like a person who’s on TikTok, even if you aren’t.