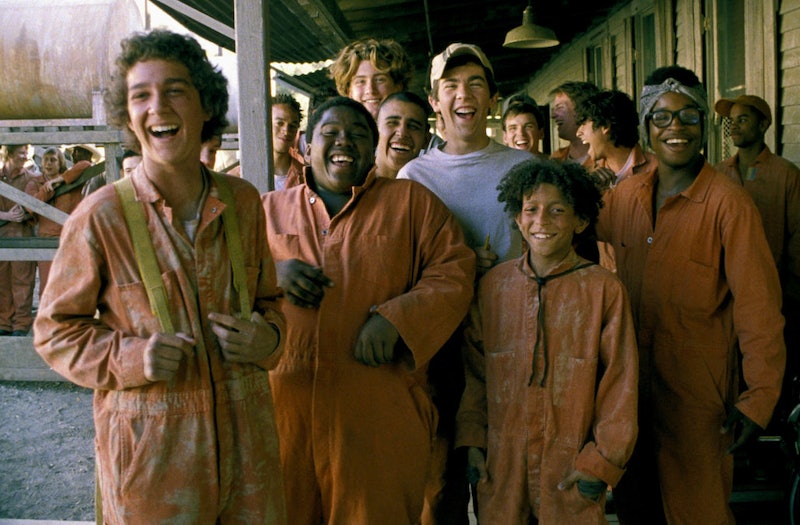 One day, when I was in fourth grade, I received a book in my classroom "mailbox." In fact, every kid in our class received the very same book, a book that we were not required to read for school but that, rather, we were allowed to take home and keep. We were all flabbergasted. Had there been a mistake? What was this unthinkable treasure, this gift from school that required no labor in return?

I vaguely recall a teacher informing us that it was a book "about math" or "geometry" or some such subject. Clearly, this was intended to be an educational gift, and any pleasure we derived from reading it was incidental. I also found the cover frightening, and somewhat reminiscent of the children's horror film James and the Giant Peach.

But still, I read Louis Sachar's Holes along with everyone else. It didn't meet any of my requirements for great literature at the time (i.e., it didn't have a cat protagonist or even one wizard). And yet, I loved Holes. We all loved Holes. Some children even went so far as to give it the highest of all literary compliments: it was "better than Harry Potter" (I never went that far, both out of honesty and out of fear of being labelled a heretic).

Still, though, I loved Stanley Yelnats. I loved the pig-curse and the mystery of Kissin' Kate Barlow. I loved the adventure and the gross peach jars, and the old time-y love story. And, although I didn't quite understand it yet, I loved the scathing critique of our prison industrial complex.

See, Holes is about a boy named Stanley Yelnats who is sent to prison for a crime he did not commit. Some of the boys at Camp Green Lake, a "juvenile correction facility," did commit the crimes they were accused of, but their wrongdoing is generally minor (Stanley, for instance, stands accused of stealing shoes).

All the boys are made to dig holes all day in the sun. The holes must be five feet wide and five feet deep. They are told that this work is for their benefit, to turn them from "bad boys" into "good boys." But Stanley soon discovers that the digging is all part of a plot to uncover buried treasure, hidden by the notorious outlaw Kissin' Kate Barlow. Through various twists and turns and flashbacks, readers uncover the mystery of this treasure, and of Stanley's family curse, and of his relationship to Zero, another child prisoner of the camp. Readers follow Stanley and Zero through a hair-raising adventure, until at long last all is revealed, the curse is broken, and Stanley and Zero are released. Camp Green Lake is bought out by the girl scouts. All is well.

Except that the real world is full of Stanleys and Zeros, and they rarely have such an easy time finding justice.

Before reading Holes, I doubt I thought much about prison as a concept. It was a place where criminals and Batman villains were hauled off to, never to return again. Before Stanley Yelnats, I don't think I had seriously considered that people in prison could be innocent. Or—in Zero's case—guilty of a minor crime that in no way merits a cruel and unusual punishment. It hadn't occurred to me that imprisoned people could be made to work grueling hours for someone else's profit. And I certainly wouldn't have thought of inter-generational trauma as one of the many factors that turns "good boys" into "bad boys."

Of course, I didn't quite articulate it that way in fourth grade. But I understood what Sachar was getting it: my stomach clenched at the injustice of Stanley's arrest when he'd done nothing wrong. I felt sick with Stanley and Zero as they were forced to dig day in and day out, with no end in sight. I hated the "counselors," wielding their absolute power and repeatedly reminding Zero that he was "worthless."

I laughed, too, of course, because Louis Sachar is nothing if not diabolically funny. But in between the palindromes and the pig-based bits of folklore, Sachar manages to plant a few unshakable truths about injustice. This "prison" is not fair. The kids aren't being "reformed," just painfully exploited. In the 1800's love story flashbacks, readers learn that Kate, a white woman, was in love with Sam, a black man, who was murdered when the two of them attempted to elope together. The Warden of Camp Green Lake is a literal direct descendant of the man who led the mob against them. She is searching for Kate's treasure, which was stolen from Stanley's family. Stanley's family, in turn, screwed over Zero's family before immigrating to America, landing them under a family curse.

It is only when Stanley helps Zero that the curse is broken. It is only when these two children band together that they are able to overthrown the Warden, just barely beginning to untangle the generations worth of trauma and injustice, and destroying this one small corner of the for-profit prison industrial complex.

Dark stuff for a kids' book in which one of the characters is named "Armpit."

Holes may not capture every nuance of the school-to-prison pipeline, and it may not suggest any actionable ways to abolish prisons outside of "find buried treasure" and "break the pig curse." It may not even be a book "about math," as my teacher alleged.

But still. Holes is a bold message about the injustice of our justice system. It's an exploration of imprisonment and labor that children can understand. And it is, and continues to be, a funny, weird, powerful gift to find in one's mailbox.

More like this
The 'Lady Chatterley's Lover' Book Leaves Us With A Troubling Question
By Catharina Cheung
The 'Firefly Lane' Book Ending Teases Way More Tears To Come In 2023
By K.W. Colyard
'Bridgerton' S3 Teases Exciting Social Season For Penelope Featherington
By Bustle
20 Christmas Movie Quotes That'll Get You In The Holiday Spirit
By Alexis Morillo
Get Even More From Bustle — Sign Up For The Newsletter