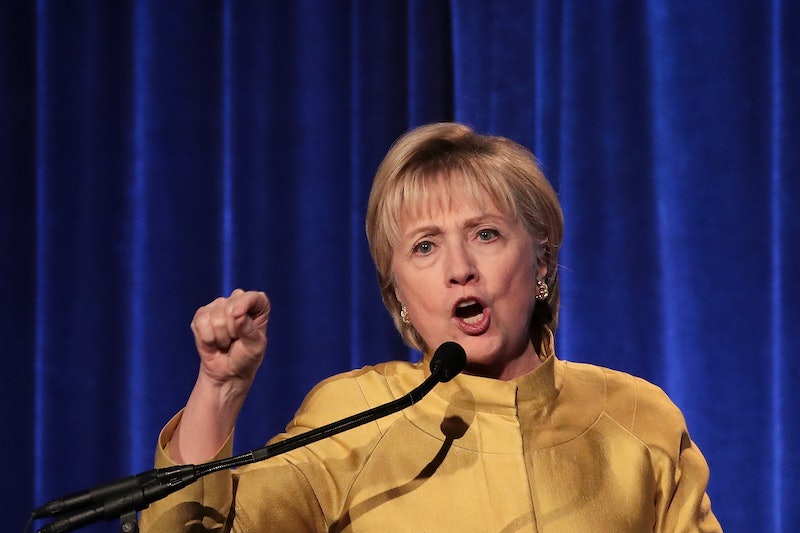 Over the last 100 days of Trump's presidency, there haven't been many moments I haven't found myself wondering: what if Hillary Clinton was President? What would the world be like? The upcoming novel Agency from esteemed sci-fi novelist William Gibson explores exactly that: it's a science fiction novel in a world where Hillary Clinton is President of the United States.

William Gibson originally plotted out the time-travel novel before the shocking November 8 result. Just like the rest of us, he had never imagined that Trump might be elected — so in the sections of his novel set in present day, he assumed it would be a safe bet to write Hillary Clinton as the president. "I assumed that if Trump won, I'd be able to shift a few things and continue to tell my story," Gibson told the New York Times. But when he woke up on the morning of November 9, the world suddenly looked a lot different.

Suddenly, merely adapting his novel to show Trump as President didn't seem right. "It was immediately obvious to me that there had been some fundamental shift and I would have to rebuild the whole thing," Gibson explained. So instead, he kept present-day San Francisco exactly as he had imagined — complete with the first female president of the U.S. that we had all hoped we were about to elect. When Agency comes out in January 2018, we'll finally be able to see what that might have looked like.

But Agency is much more than just a utopian world in which Hillary Clinton is President; thanks to its time-travel aspects, it still retains the grim speculation about the future for which Gibson has become famous. Ever since his 1984 novel Neuromancer predicted cyberspace, Gibson has been known for writing grim, post-apocalyptic futures. In Agency, readers will revisit the futuristic vision of London that Gibson created in his 2014 novel The Peripheral, in which climate change and famine have killed 80% of the world's population. Agency will be both a sequel and a prequel — with characters using time travel to attempt to alter the events leading to this dire future. The world in which Hillary Clinton wins the election is one such alternate timeline.