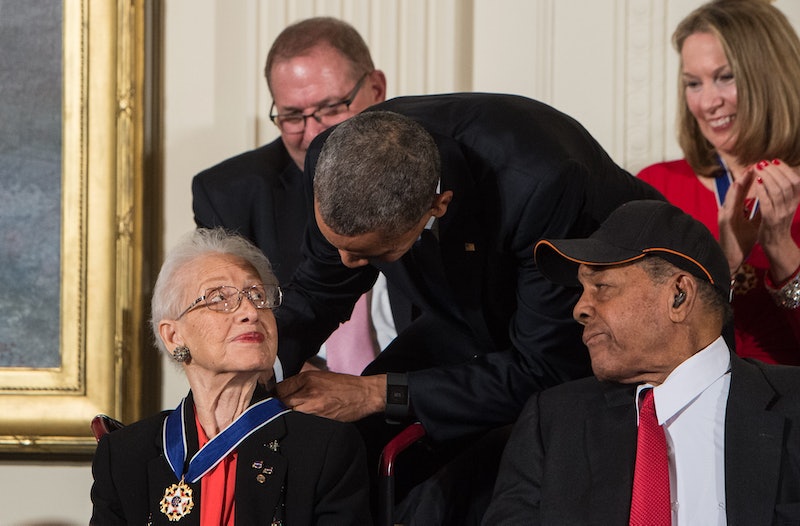 Hidden Figures tells the true story of Katherine Johnson, Dorothy Vaughan, and Mary Jackson, three black women working as "computers" at NASA in the early 1960s. It's a pretty wild story that celebrates women helping women, the importance of education, and the greatness that can be achieved despite constant discrimination. At times, the odds against Hidden Figures' protagonists are so unbelievably huge that the movie seems to take place in an alternate universe. And, yet, Johnson, Vaughan, and Jackson were very much real women, and their contributions to NASA and space travel are crucial to our nation's history. While Jackson and Vaughan have passed away, just what is Katherine Johnson doing today? The Hidden Figures star is a living legend.

In 2017, Johnson, who is played by Taraji P. Henson in Hidden Figures, will turn 99 years old. And, yes, she's still smarter than you. Johnson, who graduated high school at 14, graduated college at 18, and helped calculate the trajectory for NASA's first trip to the moon, might have retired from NASA in 1986, but her appetite for science is still going strong. "I like to learn. That's an art and a science. I'm always interested in learning something new," she told People in a recent interview. It's no wonder, then, that in 2015, Johnson was awarded with the Presidential Medal of Freedom.

These days, Johnson is living in a retirement community in Virginia, where, according to The Inquirer Daily News, she is on a break from the media. Due to the immense success of Hidden Figures, Johnson has been giving interviews and speaking to the press for months straight — a difficult thing for young actors to do, let alone a 98-year-old. But, when Johnson cannot make press appearances or give interviews, her two daughters Joylette Hylick and Katherine Moore have stepped in, as has her granddaughter, Laurie Hylick.

When she can, Johnson has enthusiastically thrown herself into the job of promoting Hidden Figures. Her hearing and eyesight are reportedly worsening, but that didn't stop her from going to see Hidden Figures three times, according to The Inquirer Daily News. When asked what she thought about the film by The LA Times, Johnson said, "It was well-done. The three leading ladies did an excellent job portraying us."

Johnson hopes that young girls see the film and are inspired to follow in her footsteps and go after jobs in math and science, no matter what society is telling them they should or should not do. "Go see see Hidden Figures and take a young person! It will give a more positive outlook on what is possible if you work hard, do your best and are prepared," Johnson told The LA Times.