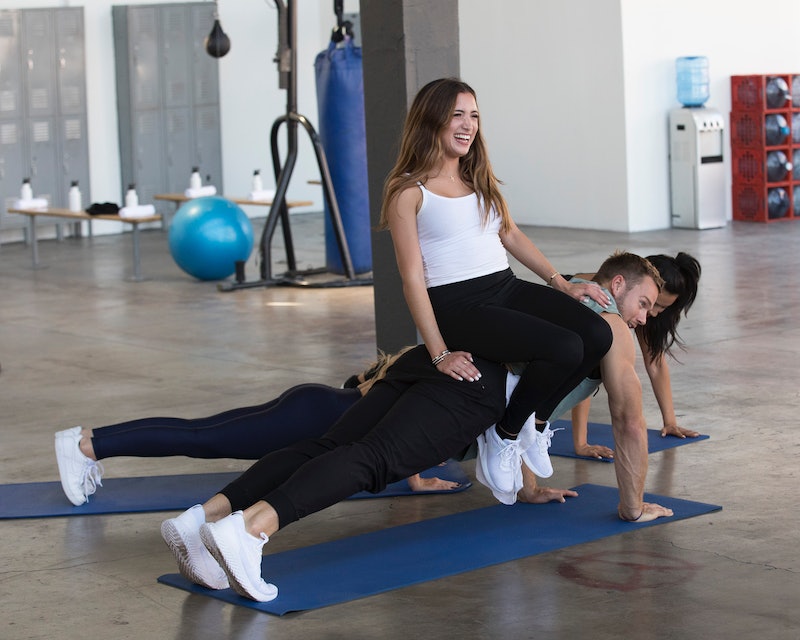 Whether or not she makes it past the Feb. 11 rose ceremony, Nicole Lopez-Alvar will still be the reigning Instagram caption queen after The Bachelor, especially when it comes to reflecting on her time on the show. In fact, by now, most of Bachelor Nation already has a good idea as to what Nicole is doing after the Bachelor simply because of her stellar social media presence. She's a good follow, by the way. You can always count on finding a witty pun or clever play on words below her photos, which is what separates them from the rest. And even after her tiff with Onyeka during the Feb. 4 episode, her commentary remains enlightening and laughable. It doesn't seem like she's taken too much to heart since filming the show.

Nicole's beef with Onyeka began when Onyeka relayed a message to Colton that was allegedly from Elyse (before she left, voluntarily). The message? That Nicole was there to meet Colton for the wrong reasons — an infamous concern often used on past seasons as a tactic to get rid of the competition. Onyeka alleged that Nicole joined The Bachelor to get out of her hometown, Miami. Thankfully, fellow contestant Tayshia came to Nicole's defense. “Well, that’s awkward, 'cause I actually was there for that conversation and Nicole never said any of that,” Tayshia said. “All she said was that you have to take opportunities and they can change your life. She never said that she needs to get out of Miami.”

Since the episode aired, Alvar did what she does best — she posted on Instagram. But that particular upload was an iconic one for her because for once, it didn't display a caption. Why? Because it didn't need one. It was a photo of a chummy Tayshia and Nicole, and it spoke for itself. The comments quickly exploded with fans coming to her defense, and even Tayshia chimed in. "NIKKI LO AND T MONEY!" she wrote. "You have a heart of gold baby and the truth always prevails! Love you."

Alvar provided more commentary on Twitter where she remains vocal about her friendship with Tayshia. She even created a hashtag for them, #taycole.

When she's not celebrating newfound friendships, she spends Monday nights watching The Bachelor with everyone else and providing commentary on her Instagram stories. Most recently, she posted three photos in the same day (an Instagram faux pas for mere common folk), but she was feeling herself and her newfound following. And of course, she made it funny. The captions were key.

Under the third photo, she wrote that she's not famous enough to triple post "à la @beyonce or @arianagrande," but her fans disagreed. She even joked about taking them down in the comments, but alas, they still live on her feed in infamy.

Unless future episodes of The Bachelor are more revealing, it looks like Onyeka was wrong in assuming Alvar wanted out of Miami. As of Grammy's Sunday, she was watching from home with her mom, per her story, who was incredibly upset when Cardi B didn't win album of the year. The week before that, she was happily Target shopping with her beloved grandmother. So, aside from hopefully finding love, it doesn't look like much has changed for Alvar since appearing on The Bachelor.