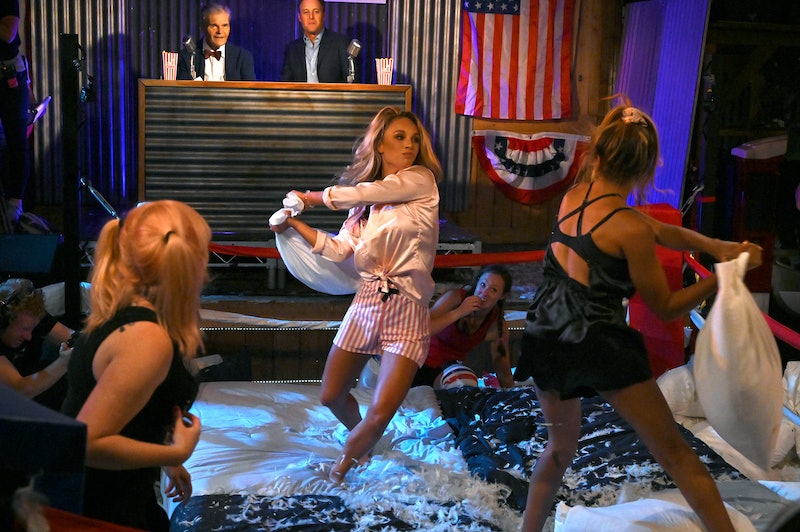 Sarah is about to show her fighting spirit during Week 3 of The Bachelor when she gets fierce in an "extreme pillow fight" hosted by Demi Burnett. But Sarah's life after The Bachelor doesn't seem to indicate that she'll end up winning Peter's heart. In fact, there's some interesting timing when it comes to visits to New York City that just may prove that this medical radiographer from Tennessee is single after The Bachelor.

Peter posted that he was home and finished filming The Bachelor on Nov. 23. (Well, there's reason to believe he may not have been completely finished filming, but still.) And interestingly, Sarah was posting on Instagram before then. She posted a series of photos hanging with her friends on Sept. 15 right before filming started and then her next post was on Nov. 18 in her hometown of Knoxville, Tennessee.

Based on that timing, it doesn't seem Sarah made it all the way to the end with Peter, which may be a surprise since Chris Harrison said that Sarah was "a favorite of Peter's" before the season premiered. But Instagrams don't lie and at least her social media make it appear that she's been having a good time since doing The Bachelor.

In Sarah's Bachelor bio, she notes that she loves nature, but also "dreams of a life outside of Tennessee." So while her Instagram shows she's been back home in the Volunteer State (she has to take care of her camera-shy dog after all), she's also been exploring New York City. On the very day that Peter posted he was back home, Sarah was rooftop bar hopping in NYC. She was also visiting her brother, who lives in New York. So if she wanted to relocate to the Big Apple, at least she'd have family around.

Another clue she may not end up with Peter is that even though she claimed New York was one of her favorite cities in her posts, she wasn't there for New Year's Eve ... even though Peter was. Instead, she was home in Knoxville and then came back to the city less than two weeks later on Jan. 11. She posted more fun shots of hanging with pals from that trip where she claimed New York City had "won" during her trip.

When she is home, Sarah shows off her chef skills. Harrison had teased that she was the best cook in the house and her Home Nom Instagram Highlights proves he wasn't exaggerating since she shares a bunch of tasty-looking food on here. She's also used her Instagram Highlights to make fun of herself on The Bachelor and she's even using her time on reality TV for some good.

Through her Instagram Stories, she donated her first cocktail party dress to a fan. She then decided to spread the love even more by asking people to make a small donation to help the victims of the Australian wildfires. If you share your donation with her, you'll be entered into a drawing to win her Week 2 cocktail dress.

For her stylish way of giving back, Sarah deserves to stay on the show. But even if Peter sends her home, she's been keeping busy with friends, food, and travel in 2020.

More like this
Tahzjuan Took A Cruise With These Bachelor Nation Alums After Visiting Zach's Season
By Kayla Blanton and Grace Wehniainen
This 'Bachelor' Contestant Had The Best Reaction To Wearing The Same Dress As Another Woman
By Grace Wehniainen
All The Clues Zach & Christina Are Together After 'The Bachelor'
By Grace Wehniainen
Zach Addressed His "Boring Bachelor Energy" After His Group Date With Latto
By Grace Wehniainen
Get Even More From Bustle — Sign Up For The Newsletter
From hair trends to relationship advice, our daily newsletter has everything you need to sound like a person who’s on TikTok, even if you aren’t.