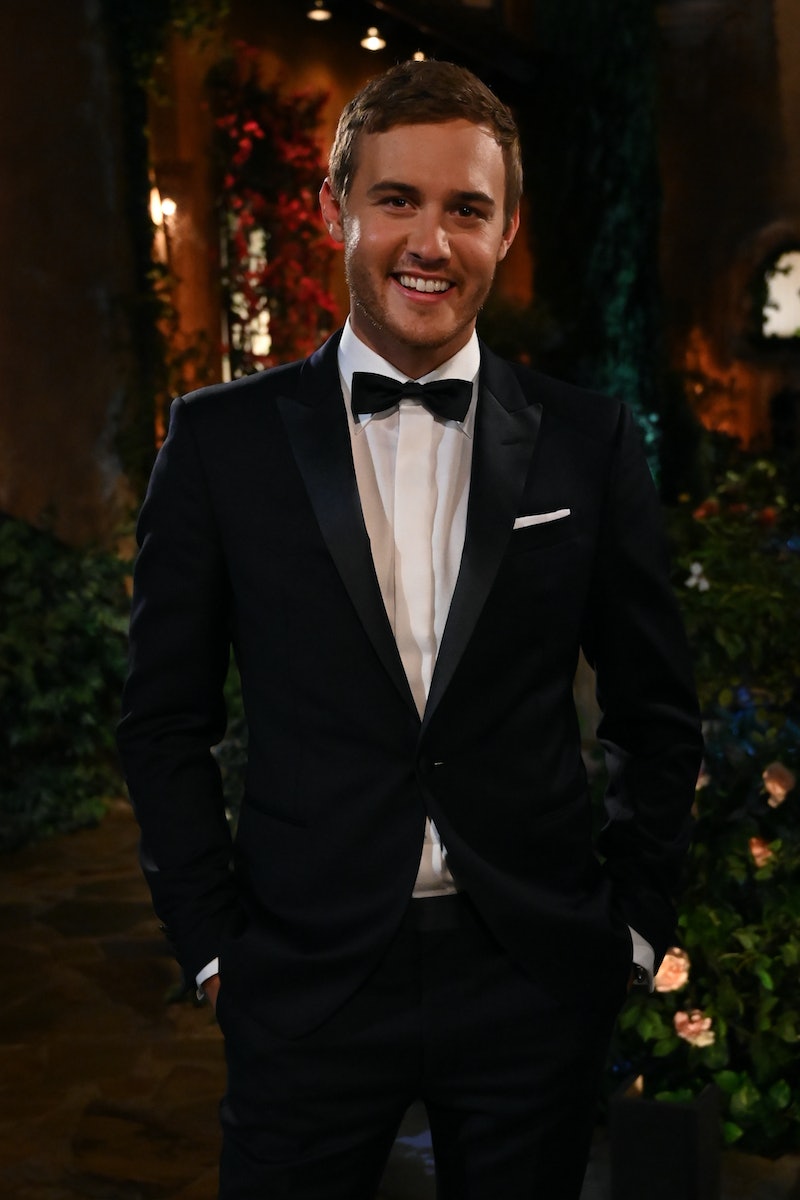 The new Bachelor season begins airing on Jan. 6, but production ended a long time ago. Peter's Bachelor season was filmed shortly after he was announced as the lead on Sept. 17, and it ran for about two months afterward. But just because filming has wrapped doesn't mean his season is over. Both he and host Chris Harrison have been dropping hints that there could be a live proposal or something similar still to come.

Initially, this season's Bachelor contestants were announced the morning before Peter was officially named the Bachelor. ABC released photos and names of 33 Bachelor hopefuls. Eventually, that number was whittled down to the 30 official contestants who meet Peter on night one.

Filming appears to have begun on Sept. 19, as that's when show creator Mike Fleiss posted a photo of The Bachelor mansion to Twitter. Bachelor blogger Reality Steve then reported that the first group dates were filmed on Sept. 22. That's on par with recent seasons like Ben Higgins', Nick Viall's, and Colton Underwood's, which also started filming around the third or fourth week of September.

By early October, Peter's journey had already begun its international travel leg, with dates being filmed in Costa Rica. According to an ABC press release, the show also traveled to Chile, Peru, and more throughout the eight-week production.

Peter returned to Instagram on Nov. 23 to officially signal the end of filming. "Just got back from two months of the most insane journey ever... told my boy everything and he can't believe it!" Peter captioned a photo of him and his dog.

However, recent reports have suggested that Peter may not be done filming after all. Reality Steve admitted in a recent blog post that he doesn't know who Peter picks in the end — and Steve believes that's because Peter hasn't picked yet. What's the best way to avoid finale spoilers? To air the ending live on the After the Final Rose special. It would be a first for the show, but ABC may just be that committed to a "spoiler-free" season, as Peter keeps putting it in interviews.

Chris Harrison also hinted in an interview with Good Morning America that things have yet to wrap up. "You truly aren't gonna know how it's going to end until the very end," Harrison said, adding, "It's possible it's still not over."

There's no way of knowing for sure what ABC has up its sleeve, but a live proposal seems within the realm of possibility. So even if Peter's season "finished" filming in November, there may be a lot more yet to come.