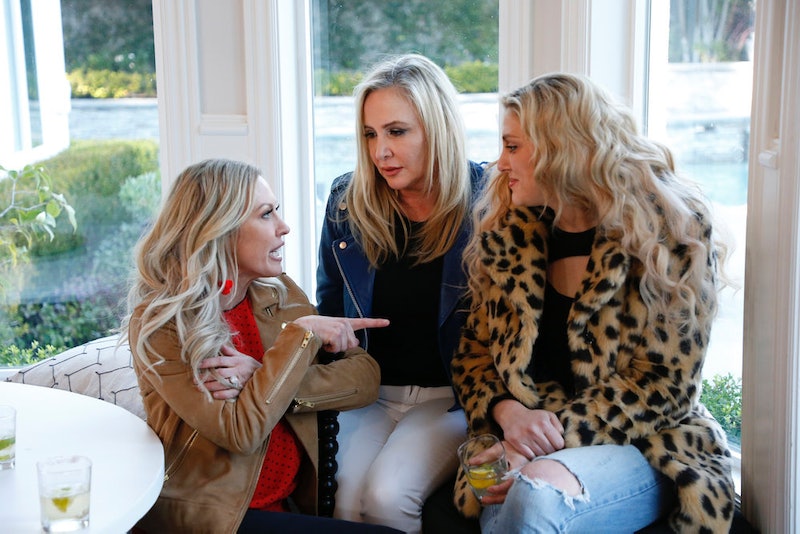 Being on the Real Housewives Of Orange County — the franchise’s original program and the longest-running — is a job in and of itself, but the women on the show have made it their mission to use their platforms to boost up their other projects. From gyms to insurance companies to clothing lines and publishing projects, everyone stays busy. But what is Shannon Beador’s job now on Real Housewives Of Orange County? She’s a Housewife, but she has plans of her own, too. Even if she doesn't show up at an office every day.

Shannon has had a hard couple of years, so it’s been really great to see her in Season 14 of Real Housewives Of Orange County feeling so good. As she said in the premiere episode, it was a lot of hard work, but she managed to clear her life of negative energy. She’s divorced David, got back in the shape she wanted to be on, and has started work on some new habits. Yes, she gets money from being a Housewife — about $423k a year, as seen on divorce papers obtained by Radar Online — but Shannon has also been branching out on QVC, just like Real Housewives Of Beverly Hills star Lisa Rinna.

In Season 13, viewers saw Shannon creating Real For Real, a line of ready-to-eat meals that are healthy and easy to make for your whole family.

On Real Housewives Of Orange County, Shannon developed some seafood meals, and now, according to Bravo, in 2019, Shannon has added a veggie burger to the line. These burgers were even nominated for a QVC Customer Food Choice Award for “best burger,” so they must be delicious. If you’re interested in buying Shannon’s Real For Real line of meals, it’s pretty easy — head on over to QVC on your television or visit the website where everything is for sale and ready to ship so you can just heat and eat.

Besides working out and selling her meals, Shannon is taking care of her three daughters, and she's healed enough from the demise of her marriage to fall in love. Her new beau's name is John Janssen, and according to Shannon, she never expected to fall in love so hard and so fast. “I had a connection and a comfort with him that I haven't experienced with anyone before, so I'm really grateful that he's in my life,” she told TooFab. Her daughters like him, too, which is important to Shannon. “They see that I'm happy, and they want me to be happy,” she said.

Shannon's also sure this one will stick. In an interview with Us Weekly, Shannon said that because John had gone to college with friends of hers at USC (Shannon is also an alumnus), he was already vetted as being perfect for her. "My friends have known him for 30 years, so I didn’t have to make sure he was there for the right reasons," she said. "He’s just a great person. I have a great connection with him. … I’m very much in love.”

A new man, a new outlook on life, and a new and successful business venture mean that Shannon is the best she's been in years, and it's so great to watch.