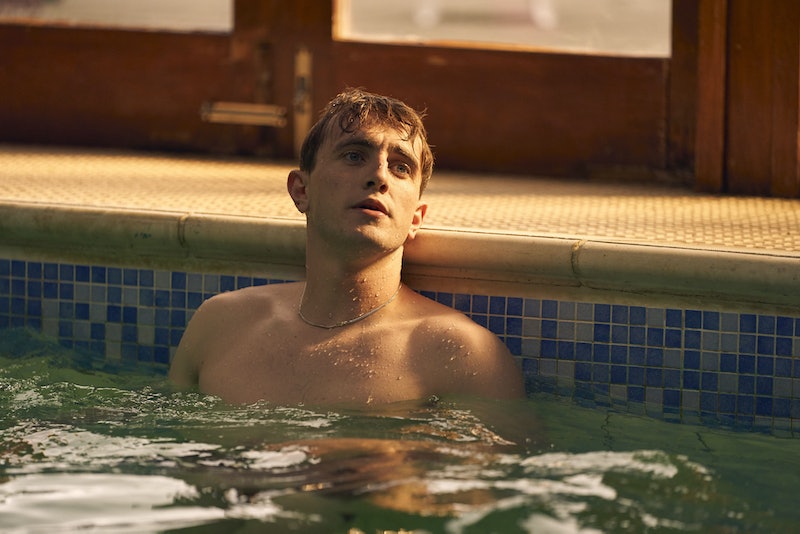 It’s been a little over a week since Normal People, the BBC and Hulu adaptation of Sally Rooney’s award-winning novel landed on screens and I’ve spent precious little time thinking about anything else. Will they? Won’t they? Why can’t they just sort it out? Connell and Marianne’s love story has monopolised my group chats and just about every waking thought. Their romance and portrayals (Daisy Edgar-Jones and Paul Mescal are nothing short of brilliant) aren’t the only things captivating audiences though… Even the props are getting a look in. I’m talking about Connell’s chain, of course. It even has its own instagram account. But what is the meaning behind Connell’s chain?

Glad you asked. The lust-inducing chain is a small, but very significant detail. Described as "Argos chic" in the book, Mescal insisted on the detail during costuming, as per The Cut. It remains in place throughout the series – steamy sex scenes included – and, when filming ended, Mescal gifted it to his co-star. Edgar Jones then lost it. But she couldn't have known the destabilising power it would come to command.

What is the meaning behind Connell's chain?

Whole essays have been written about just what makes Connell quite so intoxicating, but those slow close-ups on his thick neck and dainty chain started with the book. There, it is a class signifier: emblematic of the social distance between them. He's a working-class, athletic lad with a sensitive soul, forever dressed in plain T-shirts, worn Adidas trainers and carrying a fuss-free backpack. She's a proto-intellectual from a wealthy background and a penchant for vintage clothing.

“It’s absolutely part of Connell’s identity," Mescal tells The Cut. "If another character wore one, it would be totally jarring. With Connell, it fits like a glove or something.” Speaking to The Times, costume designer Lorna Marie Mugan adds: “Connell has the chain throughout, that’s the thing. It’s a thing he carries through his journey.” Elegance, simplicity, understatement: all in one.

Why are men in chains such a thing?

It is archaic to think that masculinity and femininity are still tied up in what you wear, but a quick search for men and necklaces unearths a whole host of ‘how to’ guides. The Harry Styles and Timothée Chalamet effect, perhaps? Though film stars have been wearing them for years.

In Ancient Greece, men wore jewellery as signifiers of their status, privilege, and wealth. But the bare neck chain is likely an evolution of the crucifix, worn to signify devotion. Which, coincidentally isn't too dissimilar to the chain Mescal wears IRL. His “Celtic Trinity knot thing” (swoon) is a traditional symbol that sweethearts exchange to show their love and devotion to one another.

Why is Connell's chain so sexy?

“Connell’s chain is so purposefully noticeable in the book and in the series that it had already sparked a lot of conversation between my friends," journalist Billie Bhatia told The Independent. "I searched for it on Instagram thinking surely someone must have posted something and turns out nobody had, so I did.” Enter insta-sensation @connellschain: a visual love letter to the dainty, silver links that sit perfectly in place where Paul Mescal’s collarbone meets his chest. "One does not want to over intellectualise the chain. It is just accidentally, indescribably hot," writes Vice. Couldn't agree more. Indescribably hot.