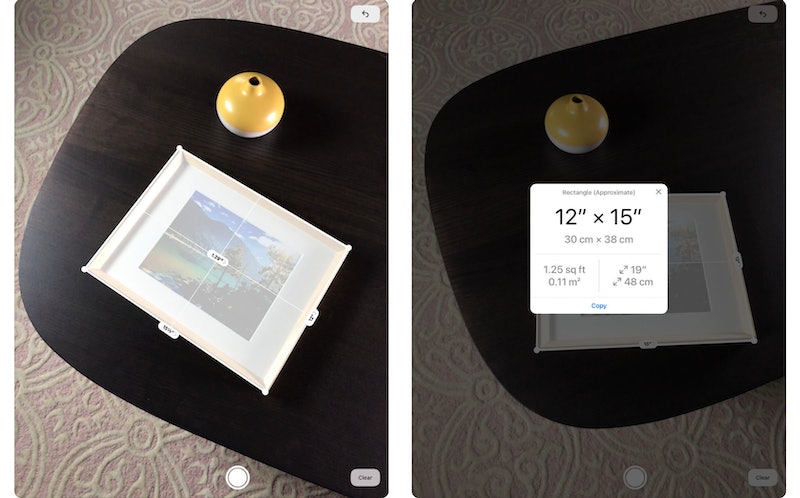 With the release of iOS 12 on Monday, users of Apple mobile devices of all kinds gained access to a ton of new apps and tools — including a surprise hit: The “Measure” app. What is the iOS 12 Measure app, you ask? It’s both exactly what it sounds like, and a whole lot more. Through the magic of ARKit 2 — the latest version of Apple’s augmented reality development kit — you can use your iPhone or iPad to take the measurements of just about anything in your environment. Although the idea of an AR tape measurer isn’t nearly as exciting-sounding as, say, being able to catch a Pokemon in your living room, it’s one of the more practical applications of AR technology — and as some folks have demonstrated on Twitter, you can still have some fun with it, too.

Apple’s own Measure app isn’t the first of its kind; other developers have previously harnessed the power of ARKit’s earlier version, which was released in 2017 alongside iOS 11, to create similar apps (with varying degrees of success). The functionality of Measure isn’t new, either — although it works through different technology, the end result isn’t dramatically different from what you can achieve with a laser distance measure.

What Measure does that these other options don’t, however, is make this kind of tool accessible to anyone with a compatible iOS device. Want to calculate the length or area of something that’s tough to get a tape measure against? You don’t have to buy a separate device to accomplish that calculation; you don’t even have to buy a separate app to do it. Everything you need is built right into something you already own — your phone or tablet. All you have to do to get access to it is update your device to iOS 12.

According to Mashable, the first time you boot up Measure, it will ask you to “point your phone all around the environment you’re in” for calibration purposes. After you’ve completed that task, you’ll be able to start measuring items in your surroundings. To do so, you just point your phone at whatever you want to measure so the camera can see it, then tap the points you want the app to measure between on your device’s screen. The app is also capable of recognizing some things on its; per Mashable, you can measure these objects “by holding your iPhone up to, say, a monitor, TV, or box,” which will cause the app to “overlay the object in yellow and allow you to lock that point in.” Writes Jake Krol, “From there, you can get the measurements of that recognized object without doing the manual work of designating a boundary.”

The app isn’t without its flaws, of course; it’s mostly accurate, but not perfectly accurate. When Krol measured his MacBook Air, for example — a laptop which measures at 13.3 inches diagonally — the app calculated it at 13 inches even, which is, as Krol put it, “not bad, though not quite dead on.” CNBC echoed this assessment, calling it “[not] a perfect replacement for a regular measuring tape, but … good if you need a quick estimate when you’re in a bind and don’t have a real tape measure.”

Plenty of folks have found some, uh… creative uses for Measure, too, of course. Take, for example, all the people who have discovered you can measure your pets with it:

To get Measure, first make sure your device is compatible with iOS 12 by checking here; if it is, go ahead and update to iOS 12 and you should be good to go. Have fun, kids!

More like this
WhatsApp Will Soon Let You Leave Group Chats Silently
By Darshita Goyal
How To Remove A Sound On TikTok
By Emma Carey
Hinge's New NFAQ Feature Is Demystifying Queer Dating
By Emma Carey
What Does POV Mean On TikTok? The Popular Acronym, Explained
By Emma Carey
Get Even More From Bustle — Sign Up For The Newsletter