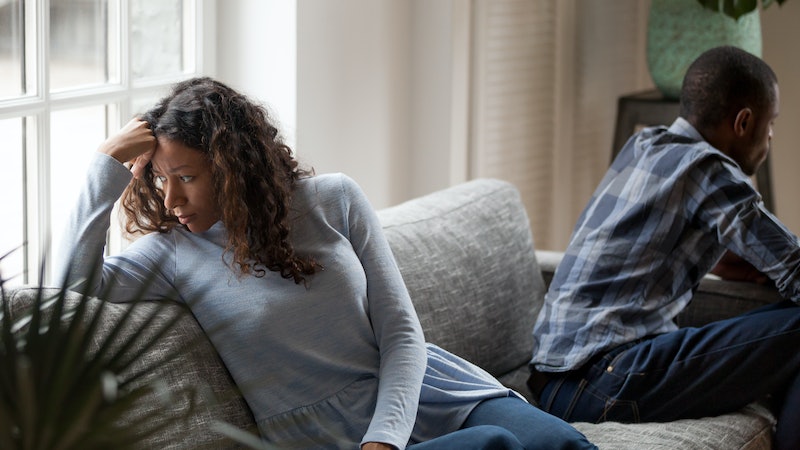 When you hear "it's not you, it's me" during a breakup, it's possible to get quite down on yourself and think the worst: that what that person really means is that they think you aren't good enough, or simply not "the One." But trust, humans are complicated creatures, for better or worse, and the reasons that people can't be in relationships are sometimes more nuanced than we allow into the typical narrative of romance. So, what could that oft repeated line it's not you, it's me, actually mean when it comes up during a breakup?

"During a breakup, when someone says it's not you but them, the other person may have enough insight that they are not ready for a committed relationship and want to be honest with you," trauma therapist Shannon Thomas, author of Healing from Hidden Abuse: A Journey Through the Stages of Recovery from Psychological Abuse, tells Bustle. And while this may sting to hear, especially if you like the person and want the relationship to go somewhere, the honesty and self-awareness is a positive thing in the long run.

"It takes emotional intelligence and maturity to be a healthy partner, and some people are simply not there in their personal growth and development," Thomas says. "The other person could lack the personal discipline it takes to be a healthy partner. They may recognize they still have a wandering eye for other people or are too self-absorbed to make the time needed for a relationship."

Thomas says that it's far better to hear it is them, and not you, then to wait and see how it goes without them letting you know where they are really at. The other person may act out or behave badly because they were not ready for a long-term relationship, which can end up causing a lot of pain and confusion in the partnership, Thomas says. And again, it doesn't necessarily mean that they don't like you, or that there is no chemistry between the two of you. Sometimes — in fact many times — it's simply about timing and differences in emotional growth, expectations, and desires for your personal lives.

"You hope people have personal awareness to know whether or not they will make a good partner, and not waste our time stringing the relationship along, but going nowhere," Thomas says.

Of course, such a generic line or sentiment can be frustrating when people don't give more specific reasons for leaving a dating situation. And if someone says this to you without giving much else in way of an explanation, it's best not to dwell for too long if you can. While asking for clarification is totally cool and communicative of you, it's also not about you if they aren't willing to add much more.

"If someone tells you, 'it’s not you, it’s me,' believe them," therapist Dea Dean, LPC, tells Bustle. "This line really is revealing about [the other person]."

Rather than combing through every interaction you’ve had with them, trying to determine what quality or behavior of yours “wasn’t enough,” or “didn’t fit,” realize this person is either unwilling to go through the discomfort of giving honest feedback, unable to be emotionally vulnerable, or maybe just unwilling to give the energy or time to be specific, Dean says. "That’s about them." Really.

So. while breaking up for whatever reason is never easy, it's always good to remember that it's not a reflection of your worth when things don't work out. Sometimes it is simply not the right fit or the right time. And that's OK. What you are looking for is out there for you.

More like this
The Best Time To Date After A Breakup, According To Experts
By Bustle Editors
Cookie Jarring Is The Dating Term You Need To Know
By Sophie McEvoy
The Top Mistakes Scorpios Make In Relationships (& How To Avoid Them)
By Nina Kahn
Is It A Rebound Relationship Or The Real Thing?
By Carolyn Steber and Lexi Inks
Get Even More From Bustle — Sign Up For The Newsletter