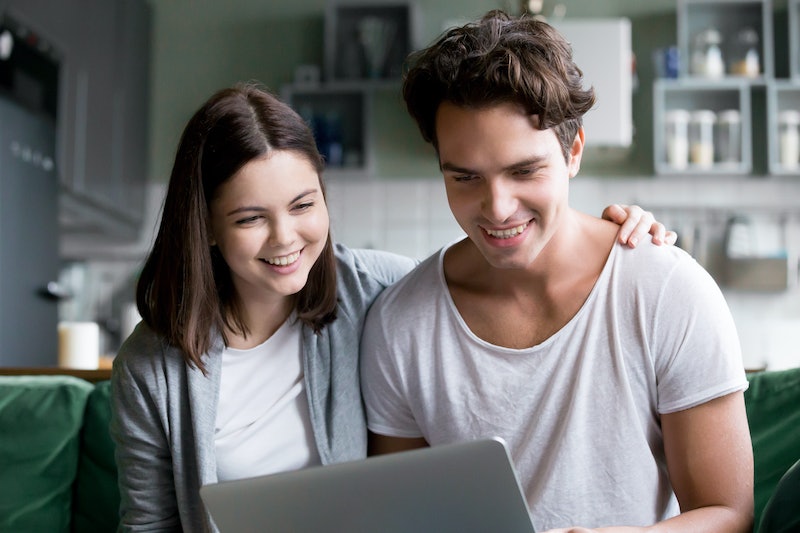 Shutterstock
By Carolyn Steber
May 6, 2020

Meeting the parents for the first time can typically involve getting dressed up, traveling, and making nervous conversation about what your partner was like as a kid. But now that many couples are forging serious relationships online, meeting the parents for the first time is taking place over Zoom and FaceTime instead of Sunday night dinner. And it's making for an entirely different experience.

Don't get me wrong, the butterflies and the childhood stories are still there, but you might also sense a disconnect when you talk through a screen, and potentially struggle to hear and see each other without a screen delay. Not everyone's the best at staying engaged over video, so you might also find yourself accidentally staring at the ceiling or someone's left ear, which can make for, well, a clunky conversation.

You end up getting an approximation of each other's personalities, rather than an authentic example.

For John, 32, whose fiancé's family lives abroad and can't travel because of coronavirus constrictions, a video chat ended up taking the place of their planned get-together. "The meeting wasn’t bad, but it wasn’t great either," he tells Bustle. "In person, you can pick up on body language and facial expressions that just [don't translate] that well online."

While John ended up making a good impression, or, as he puts it, "as good of an impression as one can make digitally," experts agree that there will always be something "off" about video chat meet-and-greets. And it goes beyond the lack of sensory input. "The presence of the camera can influence a person’s emotions, communication style, comfort level, and more," Dr. Josh Klapow, a clinical psychologist, tells Bustle. You end up getting an approximation of each other's personalities, rather than an authentic example.

When Erynne, 34, met her boyfriend's family on video chat, "his dad was flustered because he had a minute’s warning before I hopped into the call to say hi," she tells Bustle. By the second time they set up a video chat, she was able to get a better sense of their family dynamic and listen to family stories instead of hearing them secondhand.

"Video calls allow participants on both sides to 'set up their environment,'" Klapow says, "to protect, cover-up, or diminish characteristics that might otherwise be present in a face-to-face meeting."

It was less nerve-wracking than an in-person meeting because it was digital — there was no driving over to the house, no anxiety of walking up to the door.

But for those feeling stressed, meeting online can also help to alleviate some of those first-impression jitters. "I’d say it was less nerve-wracking than an in-person meeting because it was digital," John says. "There was no driving over to the house, no anxiety of walking up to the door." Erynne agrees, saying that the call was very casual and, because she was home, she was able to pop in and out of the conversation with ease.

So, looking for tips to make a video call with your new partner's parents go well? Consider swapping out your sweatpants for an outfit that makes you feel fantastic, which can help you manifest confidence. "Dress exactly as if you were meeting them in person," Klapow says. "And manage technology first and foremost." Before meeting up, check to make sure you have a good connection (no pun intended, believe it or not), so you aren't troubleshooting the entire time.