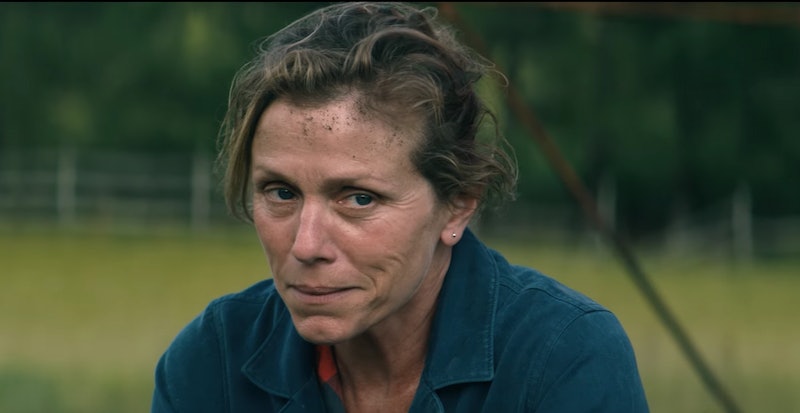 2018 is proving to be a tough year for Oscar predictors. With so many beloved movies vying for top spots, conflicting award season winners, and a constantly shifting Hollywood landscape, it's difficult to predict what movie will win Best Picture at the 2018 Oscars. As the Academy Awards approaches, however, the question of which movie will get the coveted award is becoming clearer. The nine Best Picture nominees might have all had a shot at the award when the nominations were announced in January, but since then, the real race has thinned out with four frontrunners presenting themselves: Lady Bird (director: Greta Gerwig), Get Out (casting: Terri Taylor), The Shape of Water (co-screenwriter: Vanessa Taylor), and Three Billboards Outside Ebbing, Missouri (executive producer: Rose Garnett).

It's no secret that Three Billboards Outside Ebbing, Missouri has been the Best Picture frontrunner since the Golden Globes. The movie, from writer-director Martin McDonagh, has been sweeping awards season, winning Best Film prizes at the Golden Globes, BAFTAs, and wracking up awards for lead actor Frances McDormand and supporting actor Sam Rockwell (both Oscar frontrunners in their respective categories).

That said, the film has suffered a bit from awards season fatigue and could be pushed out of the top spot. After all, in 2017, La La Land's Best Film win at the BAFTAs and the Golden Globes didn't guarantee it the golden statue. Moreover, Three Billboards has suffered significant backlash among American audiences disappointed with how the film dismisses the racism of its own white characters while simultaneously pushing aside characters of color.

In the end, Three Billboards' lack of social awareness when it comes to race might be the thing that keeps it from winning Best Picture at the Oscars. Academy voters do not vote in a vacuum. Not only do they read the same criticisms movie lovers do, they also see how recent cultural movements like #MeToo and #OscarsSoWhite are changing Hollywood up close. In an era where film and social justice movements are so closely intertwined (see the success of Black Panther, for example), it's hard to imagine an Academy voter looking at a film like Three Billboards next to Get Out and still voting for Three Billboards. Furthermore, McDonagh's absence from the Best Director category could be an indicator that Academy members don't think the movie is as good as its top competitors, Get Out, The Shape of Water, and Lady Bird, all of which earned Best Director nods.

Looking at the Best Director nominees as an indicator, The Shape of Water is most likely to win Best Picture at the Oscars. Director Guillermo del Toro recently took home the Director's Guild of America Award for his work on the film, which means he's first in line to win Best Director at the Oscars. The film also won the top prize at the Producers Guild Awards, giving it a boost over Three Billboards. And, according to Collider, in the past 10 years, eight of the winning PGA films have gone on to win Best Picture (La La Land won in 2017), as have eight of the last 10 DGA winners. Based on awards season so far, it looks like The Shape of Water will be the one to take home the award at the Oscars.

According to expert film critics cited by Gold Derby, The Shape of Water has the best odds of taking home the gold, with 10 out of 26 experts cited picking it as the winner. Three Billboards is in second place, with nine experts favoring it to win, Get Out is third with six, and Lady Bird is last with one expert on its side. But that doesn't necessarily mean that The Shape of Water has the Best Picture Oscar in its future.

For the past two years, the Oscars have favored surprise wins for Best Picture, with Spotlight and Moonlight both beating the odds to take home the prize. The 2018 Oscars could bring another surprise win, and in that case there are two more movies that could benefit from a late upswing and take the crown: Get Out and Lady Bird. Despite going home empty handed after the Golden Globes, Get Out is still very much in the game. Writer-director Jordan Peele won the Writers Guild Award for Best Original Screenplay, which could earn him a bit of awards momentum. But, more importantly, his directorial debut made a splash unlike any other of 2017.

In the age of Trump, when people across all ethnicities and economic classes feel gaslighted by the norms the president sets for American politics, Get Out is more relevant than ever. If enough votes are split between The Shape of Water and Three Billboards, and more Academy voters are moved to vote in accordance with their social conscience, then Get Out could very well be named Best Picture.

Just as Get Out could earn a surprise win, so could Lady Bird. The critical darling from writer-director Greta Gerwig is adored by Hollywood, and the noise made by Gerwig's snub at the Golden Globes coupled with her win for Best Motion Picture Comedy could give her enough momentum to push her over the edge. Moreover, the film could also benefit from the recent spotlight on sexism in Hollywood. Gerwig's Golden Globe sub in favor of "all male nominees," as Natalie Portman said, did not go unnoticed. And the #MeToo movement has opened the door for more women in Hollywood to come forward about unfair treatment behind the scenes, be it sexual harassment and assault or the pay gap. This growing awareness will hopefully make Academy voters more cognizant of their own biases when choosing winners, something that could help Lady Bird win Best Picture.

There are a lot of factors that go into what movie wins Best Picture at the Oscars. Backdoor politics and behind the scenes drama always play a role, but at the end of the day what makes the 2018 Best Picture race so difficult to call is because a majority of the nominees are actually good. The question is, will one of the undeserving take home the prize.

More like this
Here’s Everything Coming To & Leaving Netflix In December
By Jake Viswanath
You’ll Be Able To Stream Bullet Train Before The Holidays
By Arya Roshanian and Radhika Menon
How To Stream 'She Said' In The UK
By Maxine Harrison
The 'Love, Lizzo' Harry Styles Scene Is Just 1 Moment That Made Fans Feel Seen
By Brad Witter
Get Even More From Bustle — Sign Up For The Newsletter