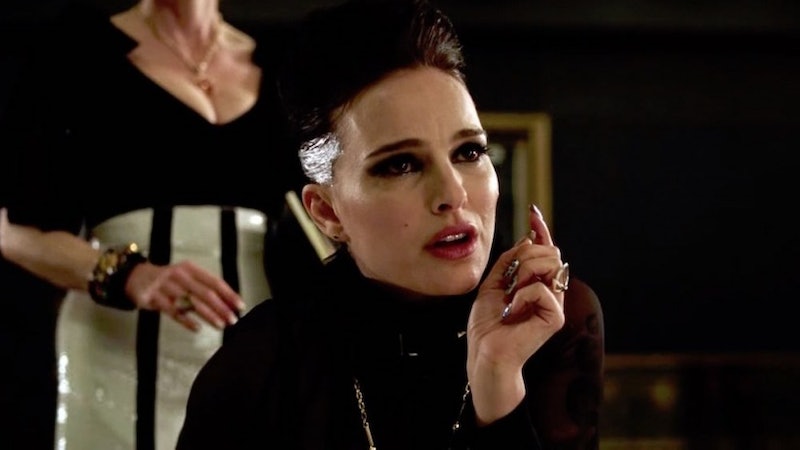 What do a pop star and a terrorist have in common? That's the bold question a journalist asks Natalie Portman's seasoned pop star Celeste in Vox Lux at a press junket that quickly goes off the rails. "I don’t see any similarities except that if you stopped paying attention to us, we’d both cease to exist," she replies defiantly. It's an exchange that feels like the crux of the movie, which chronicles the meteoric rise and subsequent implosion of the fictional pop star Celeste, (played by Portman in the present day and Raffey Cassidy as a teenager) a Columbine-era school shooting survivor who's quickly swept up in the music industry machine after the song she performs at her school's memorial service becomes a viral hit.

Sitting across from Portman at the Whitby Hotel in New York in a setting not dissimilar to that scene is a bit surreal. But while Celeste's interview ends in a meltdown, Portman is friendly and attentive, offering insight into the film's parallels between fame and infamy and how she relates to Celeste as a former child star who has been in the public eye since an early age.

"It affects you, it affects the way people close to you treat you, or the way strangers treat you," she says. When asked how she navigates a media landscape in which celebrities are increasingly urged to use their platform to make political and personal statements — something Portman has done for causes she supports — and risk swift backlash for any missteps, she shifts to speaking in broader terms about the defense mechanisms her character employs to appear impervious to a culture that thrives on documenting her every move, even as it threatens to devour her.

"There’s a very physical armor that she wears," Portman says of Celeste. "Even her hair feels shellacked, and the bodysuit at her concert almost feels like chain mail. She’s got these chokers that cover her scars [from the shooting]." Celeste has emotional armor, too: She thickens her Staten Island accent as a reminder of her authenticity and her toughness. "There’s kind of performance all the time in every scenario," the actor says.

Not that she's entirely faulting her character for this. Portman adds that it's impossible as a public figure not to be at least a little bit mindful of one's actions and how they'll be received. "Of course I do that in some scenarios to a certain extent," she concedes. "I think any way you try to be... any impression that you try to give people that isn’t necessarily the impression they would have if they were observing you as a fly on the wall is some kind of armor, because it’s some kind of thing that you are protecting of your real self."

Watching Vox Lux, it's difficult to determine what, exactly, of her real self Celeste has left to protect. No one becomes famous in a vacuum, and Vox Lux takes that idea to its extreme by conjuring a pop star whose fame is both fully indebted to her circumstances and her trauma and completely wrecked by them, making her a fitting avatar for the last decade or so of popular culture.

If you prefer your movies about the music business to be laced with ruminations on terrorism, pop culture iconography, and 13 minutes of Portman fully committing to a dance routine in a sparkling silver bodysuit, you’ll find Vox Lux to be a fascinating antidote to the entertaining yet formulaic showbiz parable that is A Star Is Born. But if you weren't already clued in by the fact that this movie is interested in drawing ambitious parallels between terrorists and pop stars, Vox Lux is not an easy watch. That's not only because of its graphic depiction of a school shooting; the camera's unrelenting gaze on Celeste as she attempts to hide her gravest flaws — her failures as a mother, her selfishness in her relationship with her sister, the way she abuses alcohol to avoid confronting the former two issues — from herself is squirm-inducing at best and utterly brutal at worst. It's a searing, occasionally confounding portrait of the world we live in, where there seems to be more of everything all the time, whether it's iterative updates on a celebrity's relationship or violent acts of terrorism.

Director Brady Corbet told Vulture that the movie was inspired by the whiplash-inducing mix of Apple news updates, which seem to treat celebrity gossip and hard news with similar importance. "You have four or five top stories," he said. "Basically, at any given time, there’s usually some coverage of a mass murder and maybe something about Ariana Grande having cut off her ponytail."

It's a pretty bleak description of American culture, but perhaps only because it's a painfully accurate assessment of how we use attention as currency. And Corbet's message about the relentless news cycle's effect on fame resonated with Portman.

"The connection between how much attention we give things and the power that gives it — whether it’s a pop star’s private life that shouldn’t really matter to us, but when it’s given this kind of spotlight becomes information that the common person will know about another human being that’s really none of their business — compared to the attention that we give these violent acts, there’s a level of spectacle to all of it and notoriety to all of it," Portman explains. "That repeats on itself so that it makes others who want that attention do the same kinds of things to get that attention."

Celeste's defense mechanism in the face of a world that thrives on spectacle is to give them what they want, to curse out a journalist and make a scene so outlandish it becomes another performance. But Portman will do no such thing, tactfully steering the conversation away from anything personal or controversial. There's no juicy, intimate quote for the interview, but after a conversation about our thirst for content and attention, perhaps that's exactly the point.