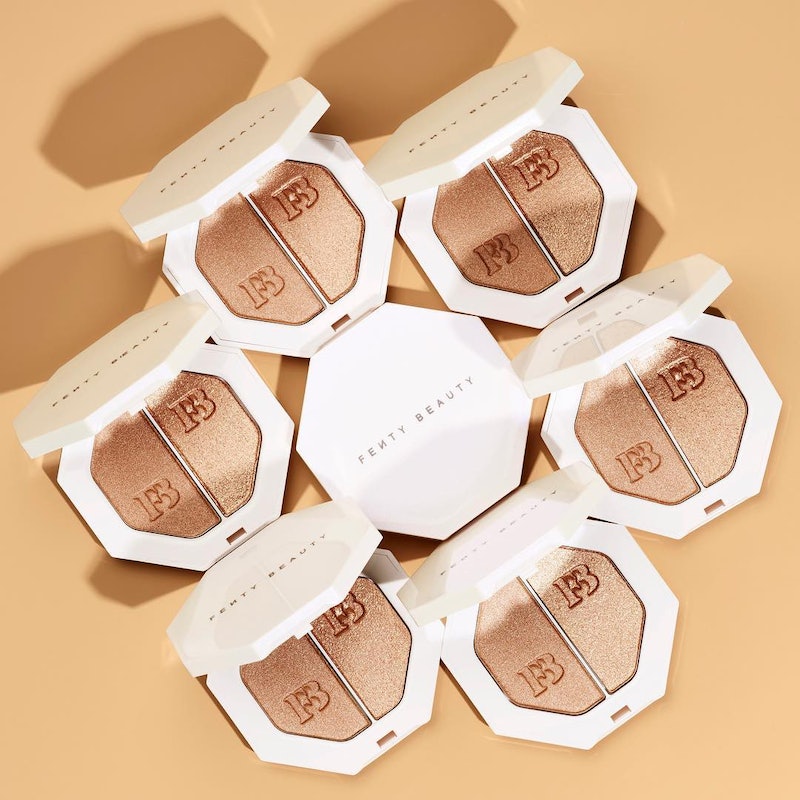 Just when you thought Rihanna and Fenty Beauty couldn't be more generous, the mogul and the brand surprised fans with even more new product launches. This time, there are new Fenty Beauty Killawatt Highlighter shades coming fans' way, and they're just in time for you to a have a glow like RiRi herself for the warmer months.

On Saturday, four new posts hit the Fenty Beauty Instagram account, announcing that the brand would be releasing even more products on April 5 — including 2 new shades of highlighter. Fans were thrilled, especially because the news of Fenty Beauty's Sun StalkR Bronzers' April 5 launch had just been announced 3 days prior. However, this is Rihanna's brand so, really, we shouldn't have expected anything less.

First up, the brand debuted the shades Afternoon Snack/Mo' Honey. The split pan design is the same as the brand's original Killawatts that debuted back in Sept. 2017 when Fenty Beauty first launched. The new dual shades are described as a "bronzed champagne," by the brand, and like the other split pans that Rihanna has created, they feature a more subtle highlight on one side and a more intense glow on the other.

The second new highlighter is in Fenty's Killawatt Foil family. The foil versions of Fenty's highlighters made their debut back in May 2018 in the brand's Beach Please collection. The pressed powders feature more of a metallic finish than the original Killawatts, and Fenty Beauty is adding a new shade called #Penny4UThots. Like the name suggests, the shade is a metallic copper a la a penny.

According to the brand, the new Killawatt Highlighters will be available beginning April 5 both in store and online at Sephora, on the Fenty Beauty website, and at Harvey Nichols in the UK.

The brand has yet to reveal a price, but given that these products already exist, just in other shades, the cost is unlikely to change. That means you can likely expect to pay $34 for the split pan and $36 for the Killawatt Foil.

News of the two highlighter shades may not come as much of a surprise to fans considering Fenty Beauty has been steadily dropping products for the past week and a half. The brand and its creator seem to be getting customers ready for summer, and it all started with the relaunch of one of 2018's most viral products: Body Lava.

On March 20, Fenty Beauty took to its Instagram account to not only announce the return of the glow creating product but also to announce that iconic shade Trophy Wife would be making its way from a Killawatt highlighter and into a Body Lava shade. Fast forward a week on March 28 and the brand's new Sun StalkR Bronzers hit the Fenty Instagram. Now, on April 1, Body Lava and the bronzers are being joined by new Killawatt Highlighters.

If you want to shop the new Fenty Beauty Killawatt Highlighters in Afternoon Snack/Mo' Hunny and #Penny4UThots, mark your calendar for April 5. Rihanna is officially help you get ready for that summer glow.