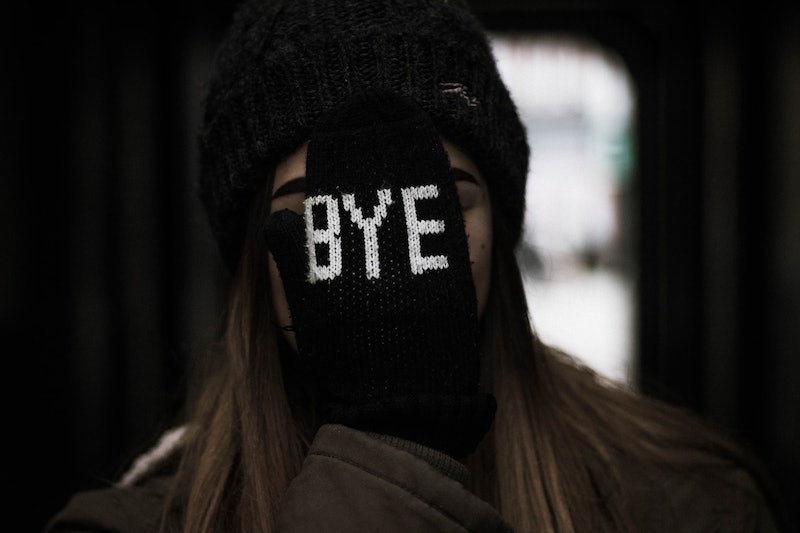 While most people have dreamed of doing something epic on their last day of work, such as, I don't know, deleting Trump's Twitter account for an iconic 11 minutes, knowing that they'll likely need to use their employer as a reference holds them back. Others have put their fears of the future aside, and things people have done on their last day of work run the gamut from heroic to totally bonkers. (The employee who got the ultimate revenge by deleting Trump's Twitter account falls into the hero camp, I might add.)

While messing with something as vital as someone's social media life — let alone the President's — could get you blacklisted from a company for life, people have long been choosing their last day at work to make a statement, burn a bridge, or just play a few (mostly) harmless pranks. When deciding whether or not to go out with a bang on the last day of your job, it's important to weight the costs and benefits. If you need to use that employer as a reference, or you work in an industry with an underground whisper network, doing something that reflects poorly on you is generally not a great idea. But, what if you do something stealthy and harmless, that no one could trace back to you?

While many people dream of an epic Office Space kind of exit, others have resorted to smaller pranks to take revenge on co-workers, like the Dark Knight Workplace Vigilante who's always ratting them out to the boss. These are some of the craziest things people have done on their last day of work, as disclosed on Reddit. Disclaimer: I have never done any of these things, and if you want to make your mark on your last day of work — proceed at your own risk.

1. Forwarding Phone Calls To Someone Else

If you've ever had co-workers who undermined you or questioned your every decision, sending them all of your phone calls is one way to hand them all of your work on your last day. "If you got calls frequently, set your phone to forward all calls to your office enemy," Reddit user tacofrog2 suggested.

Remember that episode of Gilmore Girls where Lorelai hides the picture of the ugly baby in Rory's bed? One person did the equivalent of that times a million. "I read a story on another thread that a guy took a bunch of pictures and hid them at his job and then quit," MeetMeInTheCircleNOW wrote on Reddit. "Years later, they are still finding his pictures to this day. If I were to do it, I'd write a message with each picture containing one word. So it would start a hunt for the pictures to solve [the] 'puzzle.'"

There are many things that your co-worker wish you wouldn't eat at work, like fish. This guy got diabolical revenge on his coworker using that very substance: "A place I worked at a few years ago had a guy who put a tuna sandwich inside his computer on the last day," Reddit user zenova360 said. "The next week was not fun. I asked him about it later and he said he just popped off the empty drive bay and stuffed it in." Another person left an open can of tuna on top of the fluorescent lights in their boss's office.

OK, I misspoke when I said I have never done any of these things. In eighth grade, I had a teacher who colored coded the chairs so each row was a different color. If anyone moved a chair into a different row she got really upset. One day me and my classmates rearranged all of the chairs when she was out of the room, and she spent the rest of the class period trying to get them back in order. Reddit user LambentSpoiler suggested doing something similar at work by putting everyone's stuff in the wrong spot. Time consuming, yes, but it's the little things.

If you hold the keys to the kingdom in the form of internal passwords, one way to cause a kerfuffle is to change all of the passwords on the last day. (Though in today's big-brother world it would likely get traced back to you.) "I'd probably change all the server passwords and offer to let them hire me as a 'consultant' to reopen their systems," user eperman wrote on Reddit.

6. Pooping On The Floor

Earlier this year a jogger, known as the "Mad Pooper," made headlines for taking public bathroom breaks during her runs. Apparently, people are also pooping to show how they feel about leaving their jobs, though this is a far from harmless prank that will more likely than not affect the folks who clean the office, and not, you know, your boss. Please do not do this.

Pooping somewhere inappropriate seems to be the most suggested form of office revenge on Reddit. But, one person actually did it. "One day he got off the elevator and walked down to their offices, and someone had taken a huge dump on the carpet, right in front of the door, and there was no way to open it without the door smearing it into the carpet," Beardsforever wrote on Reddit.

7. Locking Everyone's Keys In Their Cars

So, if you don't already know this, it's never a good idea to mistreat people who serve and prepare your food or have keys to your car. These people have a lot of power, and they can wield it against you. Reddit user beardedpipebender detailed the revenge of an employee who was constantly mocked by his co-workers. "One day he had enough and started their trucks, turned on the heat or AC and locked the trucks as they were running. He left and never returned."

If you work in retail, this epic revenge witnessed by Reddit user ExoGraphic is pretty classic. "In a shoe stockroom swap all the shoes and boxes around so $180 football boots [are] in $35 box. You would be surprised how productive he was in two hours, and how it took over a week to get things back to normal."

9. Having An Epic Glitter Party

If you've ever gotten one of those birthday cards that's full of glitter and confetti that gets everywhere when you open it you might wonder if the person who gave you the card secretly hates you. Everyone knows that glitter takes forever to get rid of, and dumping glitter somewhere will likely make that place sparkle for all of eternity. So, just how does this apply to an epic last day of work peace out? "Fill a huge bag with glitter and before you leave throw it on some you don't like," Reddit user Smashfacer suggested. You can also just throw it up in the air. I mean who can accuse you of trying to be vengeful with glitter? Toss the glitter and leave in a cloud of sparkles like the star you are.