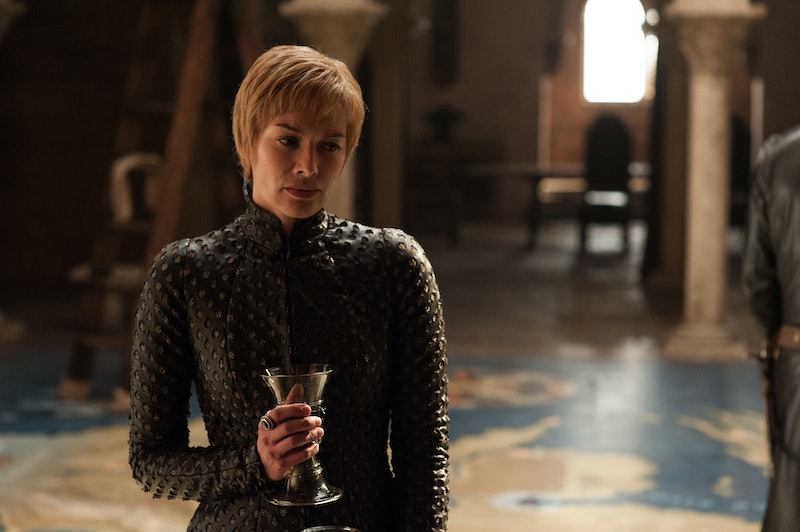 All of the promos for Game of Thrones Season 7 promised a variety of battles between the many armies of Westeros. However, the premiere was relatively chill and spent most of its time setting the table — literally, in a way, for both Arya Stark and Daenerys Targaryen at the beginning and end of the episode. How will war begin on Game of Thrones? Something's gotta give, and dragons will follow.

Meanwhile, Jon Snow is calling for more soldiers to be trained in the North. Daenerys is ready to begin her campaign for the Iron Throne — and campaigns in Westeros don't involve fundraising and yard signs. Further North, the army of the dead is making its way through the icy mist. Who will make the first move? With the world of Westeros on a knife's edge, here are some of my predictions, based on what options seem to be brewing.

That's what Yara Greyjoy is arguing for in the promo for next week's episode, "Stormborn." The official HBO press release reveals that "Tyrion plans the conquest of Westeros" in the episode as well. It would make sense that the now massive army backing the Targaryen cause would want to strike as soon as possible. However, Daenerys might want to learn the lay of the land in Westeros first — and, while doing so, something else could get this party started.

If you weren't too distracted by the King of the Iron Islands' glam pirate makeover, then you know that he promised to return to Cersei Lannister with a second marriage proposal and a "priceless" gift that would win her favor. It's probably the corpse of one of her many enemies. Who does Euron think that Cersei wants dead the most? Most of the candidates (Tyrion, Ellaria, and Olenna) happen to be at Dragonstone with Daenerys Targaryen. This could be the first move.

It doesn't strike me as too likely, but when the North learns that there's a stash of dragonglass under Daenerys' new/old home, one of their options is to try and take that island castle for themselves so that they can mine it. And Daenerys wouldn't take that lying down.

Not the "wrong" person in terms of deserving to die (though it could happen), but she just took out the bulk of House Frey. That's a lot of people. Wars have started because of the death of a single person in our world, and Arya's revenge mission could have unexpected consequences.

What if Jon Snow's worst fears are realized, and the White Walkers attack before any of the Westerosi drama come to a boil? That would be one heck of a way to start a war.

Whatever happens first, it seems like fans won't have to wait until the penultimate episode of Season 7 to see some epic fighting. There are too many ways for this great war to finally break out.