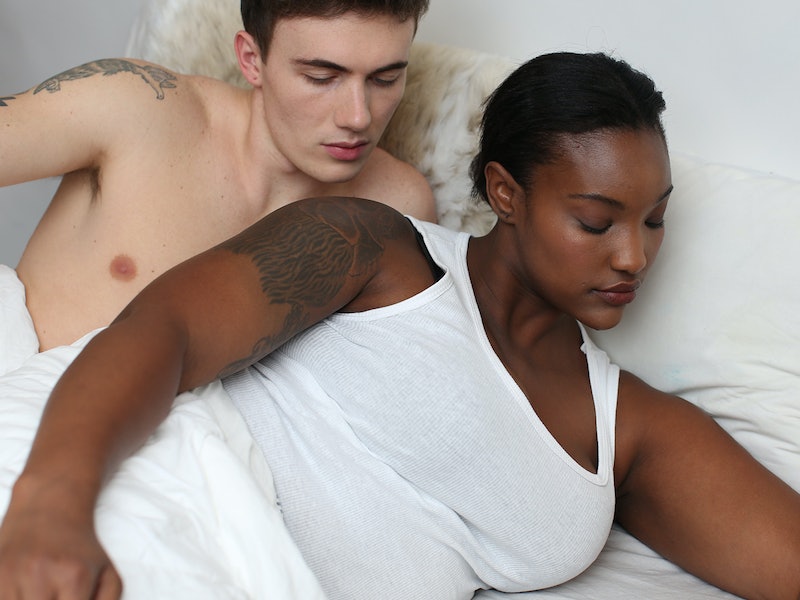 We’re always hearing that we could be having better sex, a better orgasm, or a better relationship. But how often do we hear the nitty-gritty of how we can actually better understand our deepest desires and most embarrassing questions? Bustle has enlisted Vanessa Marin, a sex therapist, to help us out with the details. No gender, sexual orientation, or question is off limits, and all questions will remain anonymous. Please send your sex and relationship inquiries to tips@bustle.com. Now, onto today’s topic: what to do if your partner orgasms too quickly and only from intercourse.

Q: “Hi, my partner and I have been together for a few months. First, I’ve found that he can only orgasm during intercourse. His never comes from me giving him a hand job or oral. What could be the cause of this? Also, he comes really quickly with intercourse, and can't go more than one round. Why would he come so quickly from intercourse, but not be able to get there from hand or head? It doesn’t make any sense to me. We've tried changing positions, but as soon as we start back up again, he comes. We've also tried creams and sprays and vibrating rings to make him last longer but they don't help... any advice?”

A: Thanks for the question! It sounds like there are two parts to your question — wanting your boyfriend to last longer during intercourse, and wondering why he doesn’t come any other way. To the first part of your question, this is a pretty common struggle that most heterosexual couples share. The average man lasts about 3-5 minutes during intercourse. That length can be frustrating for both partners, since intercourse can feel really good! The fact that he only orgasms from intercourse doesn’t necessarily affect your pleasure, but it sounds like it’s something you’re curious about. Here’s my advice for you both.

There’s No “Right” Way To Orgasm

First of all, I want to point out that there’s nothing “wrong” with your boyfriend. Everyone — men and women alike — experiences orgasm in different ways. Most women tend to think that men can orgasm easily, but in my sex therapy practice, I see a lot of male orgasm issues. Many women have orgasm challenges too, so this is an opportunity for us to be more compassionate about the ways we’re all struggling!

So here’s the real deal — some guys just don’t like hand jobs or oral sex. Some guys love hand jobs and oral, but just can’t orgasm that way. There are lots of things the two of you can do to make sex feel better for you both, but it’s important to start from a place of respecting each other’s natural likes and dislikes.

Ask Him To Give You More Feedback

A good place to start would be asking your boyfriend if he likes hand jobs or oral sex. If he enjoys it, keep giving him hand jobs and oral — he doesn’t need to have an orgasm in order to feel pleasure. If he says he’s just not a big fan of one or both, ask him if he’d like you to stop. You guys can always try exploring new techniques, but it’s not worth it to keep doing a specific act that just doesn’t feel good to him.

If you do keep trying with hand jobs or oral, ask your boyfriend to give you more feedback about what feels good for him. It might be that the two of you haven’t figured out what really works for his body yet. Try playing around with different techniques and asking him, “Do you like it better when I do this or this?” You can check out my guides to hand jobs and blow jobs for more specific tips!

Ask Him To Show You What He Likes

You mentioned that you’ve been trying numbing sprays and creams to help him last longer. In my sex therapy practice, I’m not a huge fan of these kinds of products. They numb the sensation for men, which means sex isn’t nearly as pleasurable or as fun; they also don’t tend to work very well. The loss of sensation paired with the lack of efficacy doesn’t exactly make for a good experience. You also mentioned that you use vibrating rings. Those actually tend to make men orgasm faster, since there’s the added stimulation of the vibration.

It’s up to him to make the final call about what he wants to use on his body, but I’d recommend tossing the creams and sprays, and only playing with the vibrating ring when you’re fine with him orgasming quickly.

I’m guessing that part of the reason why you’re frustrated by his fast orgasms is because you haven’t had yours. Most couples think that they should be orgasming at the exact same time, which puts even more pressure on the timing. Like I said above, the average man lasts for about 3-5 minutes — but the average woman last for about 20 minutes. If you’re aiming for a simultaneous orgasm, and you're just getting started but he’s already done, of course that’s going to be frustrating.

I actually encourage all couples not to try for simultaneous orgasms. Sure, they’re nice when they happen, but it’s so rare that they actually do. Trying to make them happen only ensures that one partner is always trying to speed up, and the other partner is always trying to slow down, which does not lead to a pleasant experience for either person. If you allow yourselves to orgasm at your own natural speeds, you’re both going to have way more fun — and more orgasms.

Make Sure You Orgasm First